ISIS Braces for Last Stand in Deir-ez-Zor With Approach of Regime, Rebel Campaigns 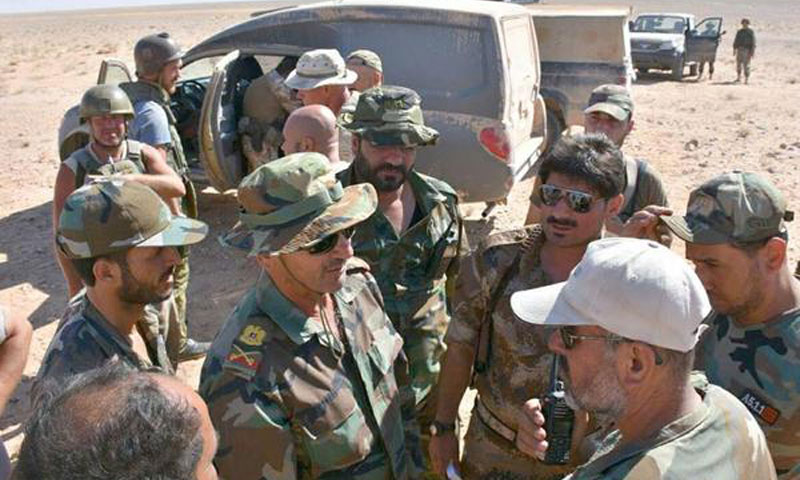 Both the Syrian army and Western-backed rebels have divided their operations between the north and south of the Euphrates River, Enab Baladi writes

Events on the ground in Deir-ez-Zor are accelerating toward the decisive steps which the province has been awaiting. President Bashar al-Assad’s forces are creeping west after breaking the siege on its military positions in the city, and is trying take back its oil fields and expel the Islamic State (ISIS). Meanwhile, the U.S.-backed Syrian Democratic Forces has launched a campaign toward the city to take control of what remains of the Syrian Jazira region.

These developments emerged as a result of Russian-American understandings that have divided the Euphrates Basin into two parts, first in the northeast and the second to the southwest of the Euphrates River.

The Deir-ez-Zor battles are different from other military campaigns in Syria as their focus is on the most prominent current stronghold of the ISIS after its hold over Raqqa city was broken. Current events will contribute largely to defining maps of control for the conflicting parties in Syria, whether from the Syrian regime’s side or other military and political parties.

Under the name “Jazira Storm,” the SDF has announced its campaign toward Deir-ez-Zor and defined its aims as “liberating remaining territory of the Syrian Jazira and east Euphrates, as well as remaining eastern Deir-ez-Zor countryside.”

It added that the campaign comes after attacks carried out by the group on the areas of Al-Shaddadi and the eastern countryside of Deir-ez-Zor “in a desperate attempt to raise morale of its fighters in Raqqa.”

Enab Baladi’s correspondents in Hassakeh said that “the military campaign should aim to take control of the area between the southern Al-Shaddadi countryside, south of Hassakeh, to the eastern banks of the Euphrates River.”

According to the map of field control, SDF influence extends north of Deir-ez-Zor to the field of Abu Khashab and the villages of Juweif, Temina and Thalaja.

Military sources told Enab Baladi previously that the SDF, backed by the international coalition, would only dominate the northern part of Deir-ez-Zor city as part of the Russian-American agreement, with regime forces’ influence beginning over the remaining parts of the province.

Documents obtained by Enab Baladi show that SDF commanders have placed conditions on Free Syrian Army groups and tribal clans to work under the central command of the Kurdish-led alliance.

The SDF, whose backbone is the Kurdish People’s Protection Units (YPG), launched the “Euphrates Rage” campaign in November 2016 with the aim of taking control of a number of ISIS positions in the northwestern Deir-ez-Zor countryside.

The military campaign at the time came after a series of attacks led by ISIS on SDF positions, especially in the city of Al-Shaddadi.

On the other side of the Euphrates, operations by regime forces and allied militias continue in the city and have achieved major advances in the last few days at the expense of ISIS. Government forces have broken the siege on the military air base in the city’s eastern countryside, in addition to the neighborhoods of Herabish and Tahtouh.

This advance came after breaking the siege on Regiment 137 after advancing in the eastern Homs countryside and the southern Raqqa countryside, amid the cover of rocket fire and Russian air forces.

Its strategic significance lies in the fact that it is the single outlet connecting the province with other Syrian cities, and is used by Assad forces to transport fighters and ammunition to its other bases in the province.

According to the map of field control, Assad’s forces are currently trying to advance through the military axis which starts from the city of Sukhna in the eastern Homs countryside and reaches the Al-Shula junction, as well as the axis from the southeastern Raqqa countryside, which also reaches the strategic Shula area, which they announced they had taken control of on Sept. 9.

ISIS controls most of Deir-ez-Zor, where Assad’s forces are deployed in some districts inside the city and the military air base.

Military sources told Enab Baladi they predicted that fighting will expand after the city to reach up to the eastern and western countryside south of the Euphrates, while the city of Mayadeen, the group’s last area in the province, will see the “fiercest” battles.

What about the Free Syrian Army?

Coinciding with the two declared battles toward the city, activists on social media have published reports that the international coalition has agreed to establish an independent base for the Jaish Maghawir al-Thawra, also known as Revolutionary Commando Army, to take part in military operations in the Deir-ez-Zor area.

But the group’s leader, Muhannad al-Talaa, denied these reports telling Enab Baladi that “there is no agreement for an independent base. The reports circulated are empty internet talk without basis in truth.” However, he said he did leave the door open to the idea being implemented in the future.

In a previous interview with Talaa, he said that the political bureau of the army was negotiating with America in order to establish a “national army.”

He said that it “will include national forces with the Revolutionary Commando Army as their nucleus,” adding that “the coalition is calling for full popular support for the political bureau from the forces present on the ground and the major figures in the eastern region.”