Eliminating chemical weapons in Syria may be mission impossible 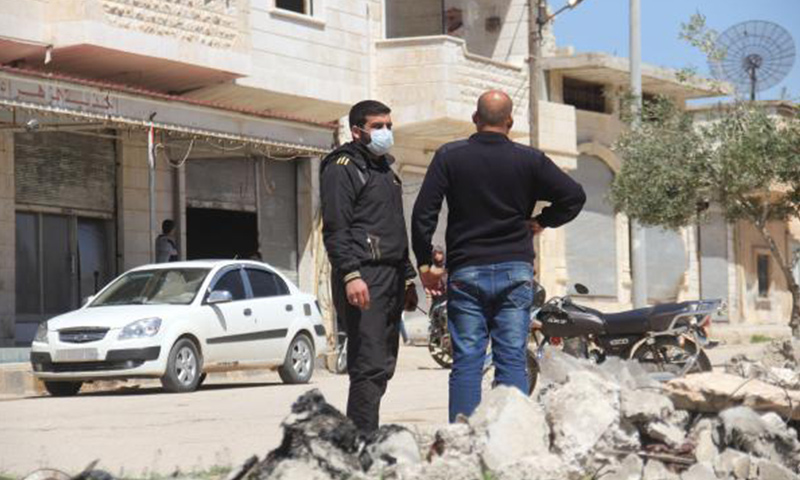 1, 2016, a Russian helicopter was shot down next to the city of Saraqib in northwest Syria, killing its two pilots. The following night, there were reports of an attack on the city using chlorine gas. The chlorine attack was followed by airstrikes that continued for days and resulted in the deaths of dozens of people and devastation across large parts of the city.

Russia did not deny responsibility for the airstrikes, indicating that they were likely carried out in retribution for the downing of the helicopter; local media also suggested the chlorine attack was Russia’s response to the assault. However, Russia and the Syrian regime always deny the use of any chemical weapons. In this case, Dmitry Peskov, Russia’s presidential spokesman, said the reports were fabricated.

More recently, in April 2017, the Syrian regime was accused of carrying out a chemical weapons attack on the town of Khan Sheikhoun, killing at least 90 people. The attack prompted the first-ever U.S. strike on a Syrian military air base – a supposed retaliation for the government’s use of chemical weapons. An investigation by the Organization for the Prohibition of Chemical Weapons showed “incontrovertible” evidence that victims were exposed to “sarin or a sarin-like substance.” The attack outraged the international community and sparked a debate about whether or not the Syrian government had given up all its chemical weapons, as it said it did in 2013. However, in addition to the evidence from Khan Sheikhoun, a look at the instances of chemical attacks in Syria since 2013 shows a clear pattern of toxic substance usage in the country over the past four years.

On Aug. 21, 2013, a sarin gas attack in Eastern Ghouta killed more than 1,300 civilians. In the aftermath of the attack, on Sept. 27, the United Nations Security Council adopted Resolution 2118 (2013), which called for the destruction of the Syrian government’s chemical weapons arsenal. It also decided that “in the event of non-compliance with this resolution, including unauthorized transfer of chemical weapons, or any use of chemical weapons by anyone in the Syrian Arab Republic, to impose measures under Chapter VII of the United Nations Charter” – the use of military force.

Russia and the United States came to an agreement that would see the “complete elimination of all chemical weapons material and equipment” – a feat believed to have been achieved by June 2014. However, the resolution had little impact on the ground, where the Syrian regime continued to use chemical weapons, mainly chlorine gas. Note that the 2013 U.S.-Russian agreement, which led to the resolution and to the cancellation of an expected U.S. military strike against the Syrian regime, had not required the Syrian regime to relinquish all chlorine gas.

On March 6, 2015, the U.N. Security Council adopted Resolution 2209, which stated that toxic chemicals used as a weapon would violate Resolution 2118 and the Chemical Weapons Convention. This resolution was meant to make clear that this included the use of chlorine gas.

However, the new resolution didn’t stop the Syrian regime from using chemical weapons. The towns of Sarmin and Qaminas were attacked by chlorine gas, and the attacks continue today.

On Aug. 7, 2015, the U.N. Security Council adopted Resolution 2235, which reaffirmed its decision, in response to violations of Resolution 2118, to impose measures under Chapter VII of the U.N. Charter and establish a Joint Investigative Mechanism, from both the U.N. and the OPCW, to identify individuals, entities or groups involved in the use of chemical weapons in Syria.

Another year passed before the investigative committee discovered that the Syrian regime was responsible for chlorine attacks in Telmens, Sarmin, Qaminas and rural Idlib. (The names of the committee members were not disclosed.) Russia questioned the committee’s findings, which extended the committee’s work for one more year.

One could conclude, therefore, that the lengthy meetings between then-U.S. Secretary of State John Kerry and Russian Foreign Minister Sergei Lavrov, in addition to the various U.N. resolutions, did little to provide civilians in Syria with any protection against toxic substance attacks.

According to Dr. Muhammad Darwish, a pediatrician who lives in Eastern Ghouta and who treated a number of the attack victims in the town of Kafr Batna: “Sarin is one of the organophosphate compounds. It affects the neuromuscular transmission process, which means that it causes an imbalance in the work of the nerves and muscles. This slows down the heart, and leads to narrowing of the pupils and shortness of breath, followed by seizures, absence of consciousness and death, in the case of non-treatment. The symptoms are similar to those involving the inhalation of pesticides. This was why some doctors knew how to deal with it. The available treatment was atropine injections.”

Darwish explains that “treating those exposed to sarin gas requires a medical team. A cardiologist and a specialist in internal medicine are required for each patient, in addition to inhalers and atropine. None of these was available. Additionally, mistakes were made because some of the paramedics were not well trained, which led to an increase in the number of casualties.”

He says, “The signs of acute chlorine gas poisoning are primarily respiratory, and include difficulty breathing and coughing. With the exception of cases of very high exposure, chlorine gas is less dangerous than sarin gas, and treating poisoning cases is easier. Since difficulty breathing is a common symptom in both chlorine and sarin poisoning, it is hard for non-specialists to differentiate between the two.”

Darwish adds, “All chemical weapons attacks after the one on Eastern Ghouta were limited, and used chlorine gas. After the attack using sarin gas in 2013, no deaths due to chemical weapons have been reported in Ghouta. However, thousands have died by other weapons.”

It is clear that sarin is much more dangerous than chlorine. This is why Resolution 2118 was very strict and required the Syrian regime to surrender all its stores of sarin, which it claims to have done, despite the OPCW report that stated victims from Khan Sheikhoun were exposed to “sarin or a sarin-like substance.”

As for chlorine gas, which is easy to make, the regime did not follow the U.N. resolutions, and continues to use it. According to Syria Deeply, “Chlorine attacks have often caused injuries but rarely resulted in death. However, over the past three years, an increasing number of people have been killed in suspected chlorine attacks.”

Why does the regime continue to use chlorine gas?

Some reports mentioned that Saraqib was attacked in April 2013 by a gas that affects the nervous system, then on May 2, 2015, and again on Aug. 2, 2016, the town was attacked with chlorine gas.

Dr. Abdul Hakim Ramada, from Saraqib, who examined some of the victims of the last two attacks, said, “The chlorine used in attacks against Saraqib and rural Idlib is much less dangerous than explosive barrels and other weapons the regime deploys. It is also much less dangerous than sarin gas. However, its use still horrifies people. When deployed one night early last August, thousands of the city’s residents fled.”

Despite the fact that chlorine is not as dangerous as sarin, or as lethal as any of the other weapons that the Syrian regime uses against its own people, the international community has been far more focused on condemning the use of chemical weapons than barrel bombs or incendiary weapons.

The U.N. Security Council has adopted four resolutions regarding the use of chemical weapons in Syria, but has issued only condemnations of other weapons such as the explosive barrels that, although internationally prohibited, have been used to kill thousands in Syria.

The international community’s sensitivity over the use of chemical weapons can be traced to World War I, when chemical weapons, including chlorine gas, led to the deaths of hundreds of thousands of people in Europe. These scars are likely the reason why they were not used in World War II.

But why, despite all the international resolutions, does the regime continue to use a weapon that draws negative attention to both the Syrian regime and its allies?

Another possibility is that the regime could be using chemical weapon attacks as a distraction. Right after the last chemical weapon attack on Saraqib, which led to 13 cases of shortness of breath, when the world was so busy trying to figure out the details of the attacks, the regime launched a vicious airstrike campaign. Thus, the regime distracted the world by using low-concentration chlorine gas, and used that as a cover for real attacks.

How serious are the dominant powers in Syria?

The U.S. missile attack on the government-run al-Shayrat airfield in April led to speculation over whether President Donald Trump‘s administration would push for Assad‘s removal in the wake of the Khan Sheikhoun gas attacks.

While the U.S. attack did send a clear message, the details of the strike do not signal an intent to forcibly overthrow the Syrian regime. Instead, the actual strike and the circumstances surrounding it suggest an initiative with a much more limited deterrence purpose.

Russia was warned prior to the attack, giving Moscow time to withdraw any fighters it had stationed in the facility. The attack also did not completely destroy the air base. The Syrian government was reportedly able to use the airfield only days after the attack, sending warplanes to target militant positions in eastern Homs Province.

Additionally, U.S. officials repeatedly stated in the aftermath of the U.S. missile attack that Washington’s military policy in Syria has not changed and stressed that the rest of the campaign in Syria will stay on track exactly as it was before the chemical weapons attack.

As such, the missile attack made it clear that the United States is willing to respond only to the Syrian government’s use of sarin gas, but not the plethora of other chemical attacks or war crimes committed by the regime in Syria since the beginning of the conflict in 2011.

While the U.S. missile strike might discourage President Bashar al-Assadfrom using powerful chemical weapons, it is not likely to result in any real change.

The dominant powers in the U.N. Security Council have been deeply involved in the Syrian crisis since the very beginning of the uprising. Hundreds of meetings have been held, thousands of statements have been made, red lines have been drawn, many promises to protect civilians or crush terrorism have been made and many predictions, ranging from the inevitable fall of Assad to the inevitable certainty of his victory, have gone unfulfilled.

Only two issues had been seriously addressed and solved: preserving civic institutions and removing sarin gas from the hands of the Syrian regime. International and regional powers have done nothing else of consequence, which is quite telling.

What’s more, these two issues have done little to help the Syrian people or stop the bloodshed. The civic institutions help preserve the regime’s sovereignty and its rule of law; surrendering the state’s sarin stores diminishes the regime’s threat to other countries. All that Kerry and Lavrov achieved from the dozens of meetings and discussions was to ensure that civic institutions would not collapse and that the Syrian regime would not harm anyone except its own people.