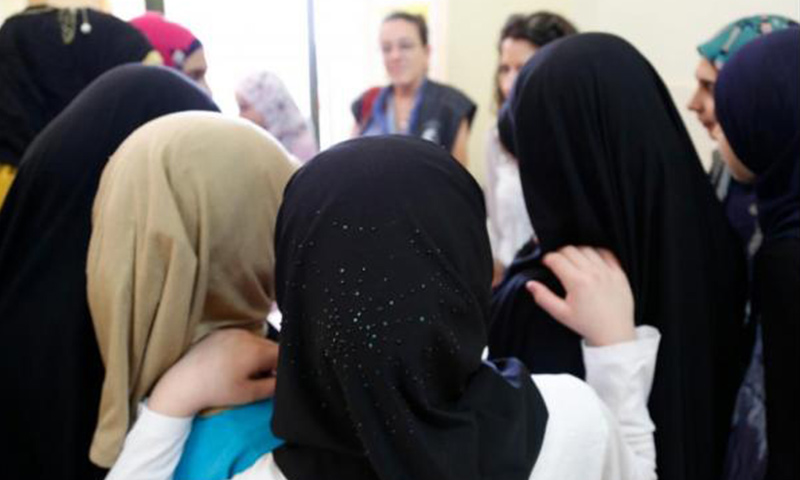 Syrian and Lebanese girls huddle round in a group discussion about early marriage at a community center in southern Lebanon in 2014. Photo by Russell Watkins/Department for International Development

Raw’a was found dead after hanging herself in February last year in her bathroom in a village in northwestern rural Idlib, Syria.

Raw’a, who was 16 when her body was discovered, had been married eight months prior. “She was kind, lovely and shy. Her parents married her to a radical Muslim young man from her village, Haas. They learned later that he had joined the so-called Islamic State. They did not try to interfere in her marriage. They thought that everything was fine,” Raw’a’s aunt told us.

According her aunt, one day Raw’a was fed up with her husband’s behavior: In addition to being very strict, he used to hit her and not allow her to leave the house. She finally ran back to her parents’ house and asked them to help her get divorced. They rejected the idea because of the severe stigma attached to divorced women in Syrian society, especially in rural areas.

The parents blamed Raw’a for her situation, refused to help her with the divorce and returned her to her husband’s house. “She felt very lonely, and felt that no one cared for her or for her suffering, so she committed suicide,” her aunt said.

Child marriages are widespread in rural Idlib and in many other rural areas. Before 2011, the source of legislation for marriage was Syrian family law, which cites Sharia law. Syrian family law sets the minimum legal age of marriage at 18 years for men and 17 years for women. However, a religious judge has the right to authorize marriages for men as young as 15, and for girl as young as 13, as long as the underage party deliberately seeks marriage, and she or he appears mature.

However, currently in opposition-controlled areas, especially in those controlled by Islamic factions, Syrian law is not followed, and a court’s authorization is not required. Sharia committees are in charge of officiating marriages, and these committees do not set a minimum age of 17 for girls.

The motivations driving marriages have changed due to the war in Syria, and girls have been marrying at younger ages. “Parents see child marriage as a way to protect their daughters – and their family’s honor – from possible sexual assault and other kinds of hardship,” according to a report by Save the Children. What’s more, the number of young men travelling to Idlib to join the fighting is a major factor behind the rise in the number of marriages.

Marwa, 13, from Kafr Nabl in northwestern rural Idlib, is not a middle-school student, but a married woman living with a husband who is 10 years older. Marwa looks like a little girl. She is shy. Her answers were very limited, and she was in a hurry to get back to playing with her husband’s sisters in the kitchen.

Marwa’s story began when a fighter in an Islamic faction asked for her hand for marriage. Due to poverty and lack of security, her father agreed. The marriage was officiated with a Sharia certificate, or what is known in Syria as an “out of sight contract,” meaning that it is not registered at any official registry. Marwa’s marriage was authorized and registered in the Sharia court of the Jaish al-Fatah Islamic faction that controls the area.

According to the United Nations Children’s Fund, “child marriage is defined as a formal marriage or informal union before age 18, and is a reality for both boys and girls, although girls are disproportionately the most affected.”

Due to marriage, pregnancy and the many responsibilities that girls at a young age find hard to cope with, they suffer from depression, and, in some cases, lose the will to live.

There are many reasons behind child marriages in Syria. The report’s authors were able to document 59 cases of female child marriages (under 17 years old) among the 70,000 people who inhabit the villages of Kafr Nabl, Jbala and Mu’arrat Hirma in rural Idlib. They also documented six cases of suicide by underage married girls.

It is often difficult to document cases of suicide among young women. Lack of forensic reports due to the complete absence of state institutions such as medical centers and police departments further complicate efforts to connect suicides to underage marriage. However, it is interesting to note that the girls’ families were the ones to disclose the suicides, as such cases are usually covered up in Syria. Even when a case is documented and registered, families often attempt to suppress the cause of death due to the stigma of taking one’s own life in Syrian society, and the lack of proper funeral facilities for those who have done so.

Sixteen-year-old Sabah (not her real name) from Kafr Nabl in rural Idlib was another victim of child marriage. Like so many in her position, she endured a very difficult marriage – her husband did not allow her to leave the house by herself, or contact her family. “She loved school, but we forced her to quit. She was young and beautiful, and we worried about her because of the complete lack of security in the streets. We convinced her to get married, when a rich man proposed,” her mother said. “Her father borrowed some money from her husband, and when he could not pay it back, they got in a fight, and the relationship between the two families deteriorated.” According to Sabah’s mother, she overdosed on painkillers because she could not cope with the issues that had driven a wedge between her husband and her family.

Child marriage negatively affects girls because they find themselves facing responsibilities that they cannot handle. “Child marriage was present in Syria before the war, but it has remarkably increased over the last few years. Poverty, unemployment, lack of education, the harsh living circumstances, in addition to families’ fear for their girls’ safety outside of the house, all made marriage the easiest option,” said Faten Sweid, a psychological counselor.

In addition to the increase in the number of divorce cases due to young girls struggling to cope with the responsibilities that come with marriage, many underage married girls suffer from psychological issues. According to Sweid, “25 young girls have committed suicide in rural Idlib, five of whom were in Kafr Nabl.”

Regarding the reasons behind the rising number of suicides in Syria, Sweid cited “mental disorders, such as depression or nervous breakdowns in moments of crisis, the inability to deal with life’s pressures, conflicts, disasters, violence, isolation, discrimination, family history of suicides.”

Although it is not easy to attempt to halt the suicide of young married girls, or even prove that child marriage is a contributing factor, the number of young girls who have committed suicide shortly after being married signals that it is a path fraught with peril. According to Sweid, a precautionary solution would be to eliminate child marriage by educating families on its dangers.

For young girls, one of the most dangerous and traumatizing aspects of these marriages is being forced into an intimate relationship against their will.

Rima, 17, married a young man who had significant facial and bodily disfigurements due to an accident he suffered as a small child; a situation Rima could not live with. She was forced into marriage due to her family’s desperate financial situation – her father had passed away, and her mother, who worked in a local dried-fig factory in her village in rural Idlib, was the family’s only provider. According to her family, Rima, who had left her husband and returned home, was found dead after overdosing on painkillers.

Editor’s Note: For security reasons, all names used in this report have been changed.