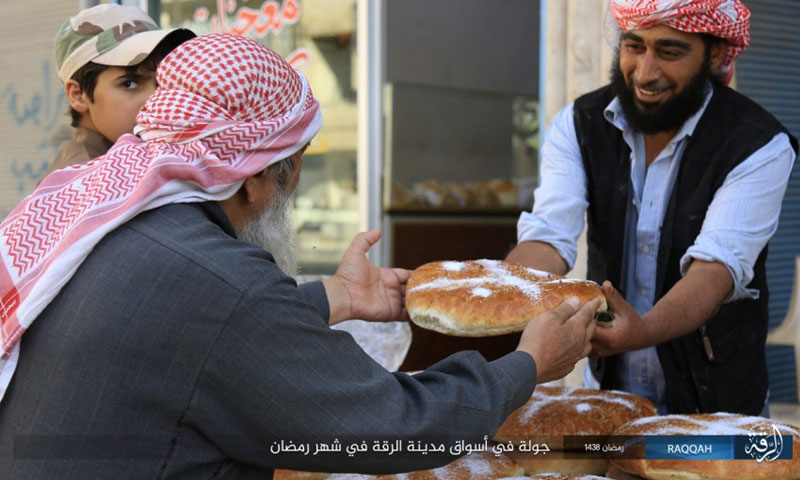 “We don’t know whether we will stay alive until the end of Ramadan or die,” said the 50-year-old Abu Mustafa while looking for the body of his eldest son among the wreckage of the houses destroyed by the bombing of Raqqa. This has become a typical image reoccurring over the last few days. “Allah! Where to escape? (…) Take us so we can rest,” he said.

Ramadan days are slow for those who remained in Raqqa and who try to hold to the rituals of the month. The vendors are still walking around carrying Ramadan food and drinks but while the smell of bread spreads in some markets, the smell of blood spreads in others.

The war “pushed people to hold to the rituals of the month and to increase their religious commitment,” declares ISIS through its media. These allegations are mixed with other scenes that represent the full image of a city living Ramadan but preparing for the unknown future.

The bombing reached tens of points in Raqqa, the most prominent of which are Al-Thakana neighborhood, the Governor’s Palace (Al-Dhiyafa) and the 23rd of February Street, in addition to the surroundings of the National Hospital, Maawiya School, al-Farn and other vital areas in the city.

By the end of 2012, Abu Mustafa left Deir Ez-Zor with his wife and seven children. He settled in al-Tabqah and then left to Raqqa when the Syrian Democratic Forces took hold of it. He explained to Enab Baladi that he had worked as a teacher for 13 years. However, he is currently working as a porter to secure his living and that of his family.

The International Alliance and the Syrian Democratic Forces aircrafts are targeting the neighborhoods of the city, especially with the arrival of the QSD to the outskirts of al-Mashlab neighborhood (northeast) on May 30, what pushed its residents to leave.

Kafa, a young women in her thirties, told Enab Baladi that the city became a “human oven,” while wondering “what is the logic behind killing 20 civilians to injure one ISIS member?”

She also considers that the coalition crossed all limits in neglecting to identify the exact locations of ISIS and directly targeting civilians.

According to Kafa, the majority of ISIS members are constantly moving inside the city after getting their families out of Raqqa. Moreover, some of the residents, who have been interviewed by Enab Baladi, pointed out at the intention of ISIS to give in the city, especially that a large number of its members have escaped to Deir Ez-Zour countryside. Others say that ISIS is looking for a bargain to leave the villages near the city, such as al-Mansoura and Hunaida in the west.

ISIS also got all its leaders away from Raqqa, according to Enab Baladi sources there, after they were given new identification cards and identity papers that hide their true identity.

Abdullah al-Diri, a resident in Raqqa and one of Deir Ez-Zor’s displaced, tells Enab Baladi that ISIS amended many of its rules, and is actually hesitant to implement them. Abdullah attributed that to the attempts to “attract people and guide them against its enemy through provocative speech that has risen in the past months.”

A few photographs emerge from Raqqa showing the residents’ attempt to continue living despite the battles and shelling. The young man is surprised by the “justification for bombing and killing civilians.” He perceives these justifications as a way to strengthen the ISIS’s account of the open war against Raqqa residents.”

With the continued displacement of people from their areas, some of the points are completely empty now, such as the southern side of the city. Abdullah also pointed out to the need to create a safe passage for civilians who are coming out of the city, in light of the danger of moving between the locations of QSD and ISIS, as mines have cost the lives of tens of residents who tried to escape.

Abu Mustafa and his family are preparing for a new displacement towards the countryside of Deir Ez-Zour, and he believes that it will not be his last displacement. “We will be displaced again, regarding the war that burnt the region and displaced its residents until it almost became empty,” he said. He also described Raqqa as a “shooting range that received all kinds of bombing.”