Drums of War Sound at Their Strongest in Daraa 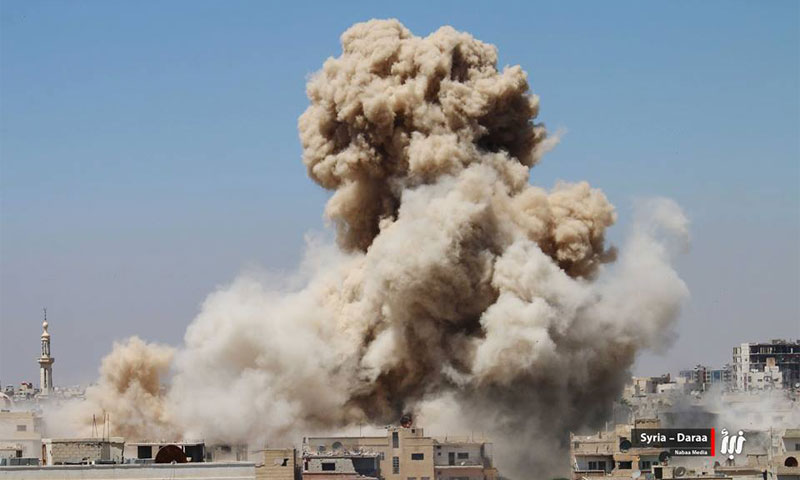 Opposition fighters struggle to hold off pro-regime assault on Daraa as Assad enacts yet another scorched-earth policy on one of Syria’s major cities, Enab Baladi writes

The southern city of Daraa has topped headlines over the last few months as the opposition seized the reins of the military initiative from President Bashar al-Assad’s forces with its assault on the Al-Manshiyah district, the largest and most important regime stronghold in the provincial capital.

However, Assad’s forces have retaken the initiative since the end of May, by way of the most violent military escalation to hit the city since the start of the revolution in mid-March 2011, declaring with this move the biggest military confrontation in southern Syria.

These forces began their campaign with bombardment, described as “hysterical,” on Daraa city and the Tareeq al-Sadd district, in addition to Daraa’s two camps and the strategic Gharaz area, in an explicit declaration of a “scorched earth” policy similar to what occurred in Aleppo city at the end of last year, or what occurred afterwards in the districts around Damascus. This has posed the question of the readiness of the rebel groups in the Al-Bunyan al-Marsous Operations Room to prevent such a repetition of events.

Enab Baladi spoke to a military source (who requested to remain anonymous) who began by pointing to the regional dimensions of this battle, saying the arrival of the Lebanese group Hezbollah to Daraa was “a red line drawn by regional powers several years ago.”

He said: “We are familiar with agreements made between regional countries and the Assad regime which carried an explicit threat to Assad that the Shiite militias reaching the Syrian-Jordanian border is a red line. Today it seems they are trying to cross the lines, or maybe change these agreements.”

The source said “Iranian expansion” had reached the outskirts of the Jordanian border while “we are faced with very suspicious Jordanian and Gulf silence,” while locally the coming stage is one of “breaking bones” between the rebel groups in all southern Syria and Assad’s forces and foreign militias.

He explained the difficulties of the upcoming military campaign, saying: “The battle will be harsh and challenging, and a loss will mean changing the entire map of southern Syria in Assad’s favor, while victory will mean that his days in southern Syria have reached their end.” Based on this reading, rebel groups in southern Syria face a major challenge in throwing all their forces into this battle, something which had not been discussed until now.

“The regime drew battle lines for Daraa city and its nearby environs only, and so many groups in the Daraa countryside have been content to adopt a viewing stance, as if the battle does not mean anything,” the source said.

He said that many activists and military leaders in Daraa had told the groups in the countryside about “the need for swift mobilization and opening fronts against Assad’s forces to lighten the burden on Daraa city as much as possible.”

The source warned that if military groups leave Daraa city on its own, Assad will be given “the key to victory,” adding that in this case, he will succeed in taking the city, and that “this will not be the last area Assad occupies in Daraa, but will be just the first.”

Displaced people look on with optimism and fear

With the displacement of all residents from the city’s districts under the control of rebel groups in mid-February, as well as the lack of camps and housing, this tragedy has increased again with the thousands of new displaced people from the Tareeq al-Sadd district and the Daraa camps, which have become stages of new military escalation.

Some local sources estimated the number of displaced from these districts to be over 2,000 families, with most of these choosing to head toward the eastern Daraa countryside, which has seen the displacement of a few thousand residents from the town of Al-Naimah after it witnessed a military escalation. Houses and schools have swelled with thousands of displaced people in just a few days.

Enab Baladi spoke to Abou Abdou Bjbouh, who was displaced from the Tareeq al-Sadd district to the town of Al-Teeba in the eastern Daraa countryside and who said that the number of displaced people in the villages of the eastern countryside “have surpassed the [villages’] ability to absorb them,” adding that, “it has become very difficult to find an open room for my family to live.”

Bjbouh added that most houses were filled with more than one family. “There is no house that does not have a displaced family. Some families have their houses, thankfully, and some weak-minded people have exploited the opportunity to demand higher rents for houses.”

Bjbouh, like other displaced people, is waiting for the consequences of the coming battle in Daraa city.

“Since I was displaced from Tareeq al-Sadd, I have not gone even once to see the state of my house and neighborhood, but the news we hear daily is about dozens of rockets and barrel bombs. I expect the scene will be painful,” he said.

Regarding the expectations about the battle, Bjbouh expressed his full faith in the ability of the rebel groups to repulse Assad’s forces and to continue the “Death Rather Than Humiliation” campaign, adding that “the revolutionaries have proven their unity and work with sincerity, as well as their ability to confront Assad and smash his forces in Al-Manshiyah.”

The Daraa battle, to which the eyes of all Syrians have turned, is highly symbolic, and has aims which are more than controlling the geographical territory of not more than a few square kilometers. The battle has become fateful for Assad’s forces, which want to establish their strength and capacity decisively against the opposition, whatever the losses, as occurred in the battles of the Damascus environs and its countryside.

On the other hand, rebel groups see the battle of Daraa city as being existential and fateful for the groups of the province remaining united and not being cut off between the western and eastern countrysides. They remain aware of the major symbolism the battle holds, in defending the “cradle of the Syrian revolution” and the land which saw the first calls on the road to the downfall of Assad and his regime.