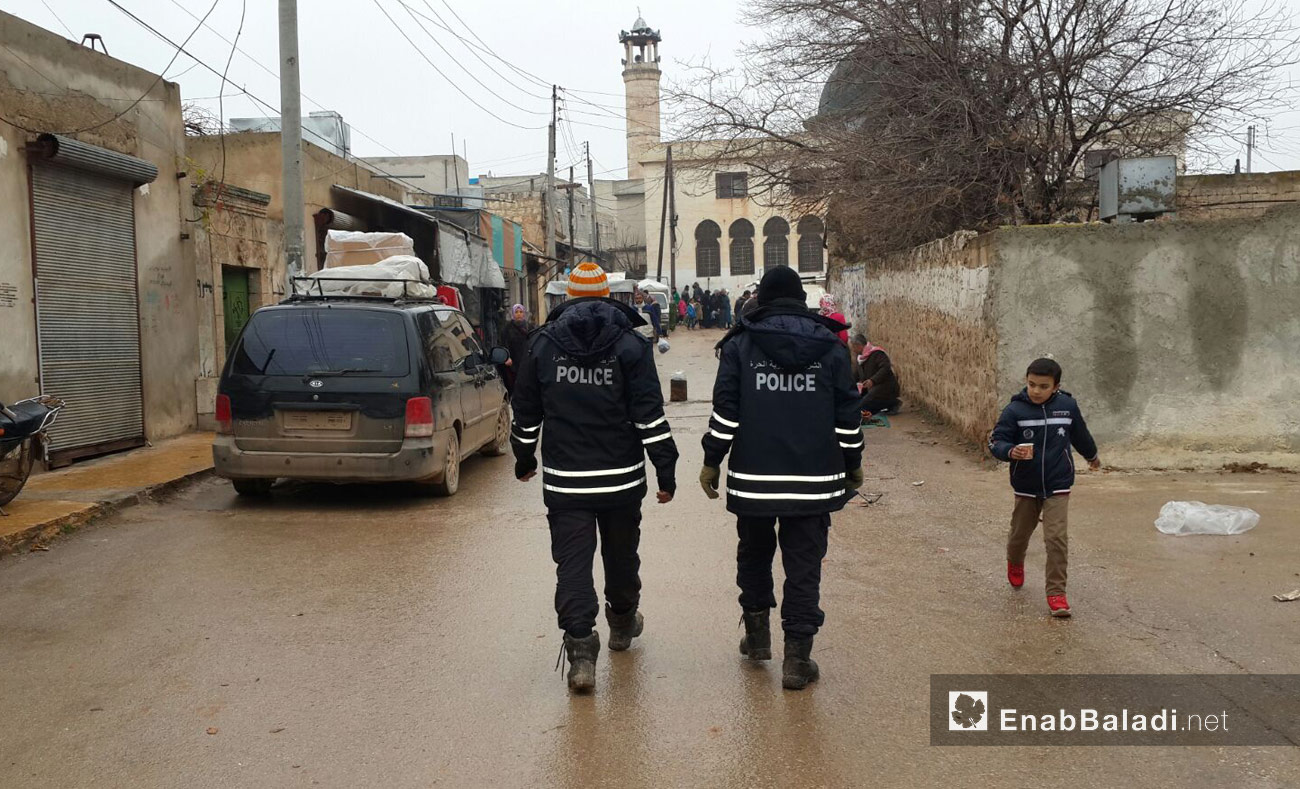 If two opposition factions clash, as is common in areas liberated from the grips of the Syrian regime, then the people of the area stay in their homes, and responsibility in the event of a disagreement falls on judicial bodies with their various jurisdictions and free police forces, which should be an executive force for the judiciary to impose security and restore stability.

But the military factions have curtailed the role of the “free” civilian police in Syria, limiting them to pursuing crimes and misdemeanors, organizing traffic and overseeing and monitoring service projects — and indeed the rebel groups have intervened in even these affairs at times.

Many reasons have prevented the free police from becoming an effective force, most importantly the absence of a united judicial entity or a body to unite security forces and coordinate between them. Besides the fact that liberated areas have been cut up by continuous bombardment and the map of control has been changed depending on the different battles taking place, balance of military power can also shift with rebel groups with differing authority and governing of their own sharia authorities.

After their formation in July 2016, headed by Dr. Jawad Abu Hatab, the temporary government tried to activate their role within the Syrian interior and formed ministries and government entities headed by effective figures moving between Syria and Turkey. As part of their work in forming state institutions, they currently work on forming domestic security force councils as part of the police directorates.

Neither the previous nor current temporary government has a clear role in administering the police, but the issue is limited to the agencies under the name “free” police, which are run by police officers who defected from the regime, and another which describes itself as civilian institutions, administered by independent figures who may not have experience.

The council which is planned to be formed includes just nine members, with defected general Mahmoud Ali attributing the reason to the “circumstances and absence of material support initially.”

General Adeeb al-Shalaf, chief of the free Aleppo police, told Enab Baladi that the police forces had categorically refused to work with the previous temporary government because all of its members were outside Syria, and those inside did not accept its existence or coordination with it, as he put it.

Shalaf said that total coordination was now underway with the current temporary government, which is trying to establish a headquarters inside the city of Azaz, north of Aleppo. He said that the structure of cooperation was “not finished,” but discussions about what falls under the government’s umbrella was on the table “despite some reservations about the lack of support. However, we might work under its banner when it’s strong and prepared.”