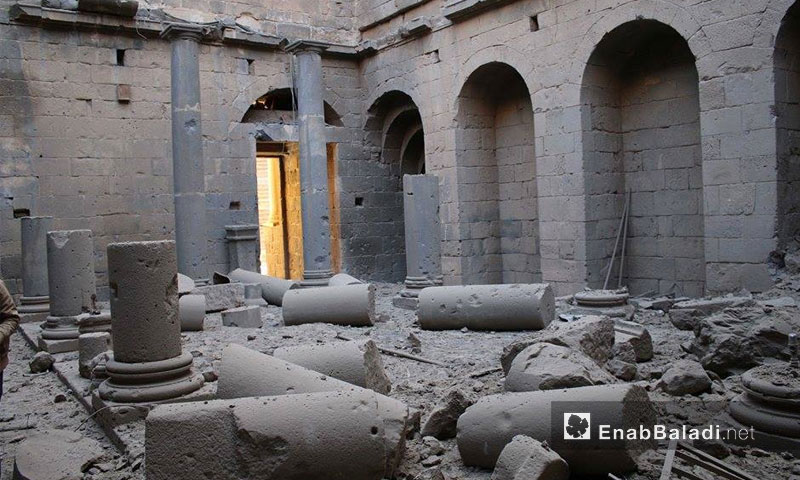 Part of Bosra Sham antiquities that were destroyed in Deraa, October 2016 (Enab Baladi)

Since its establishment in mid-2015, the Department of Antiquities in opposition-held Bosra Sham has been contributing to the protection, restoration and documentation of monuments and museums in the city.

Although the city was subjected to campaigns of destruction by the al-Assad forces since it was captured by the opposition, the efforts made by the Department of Antiquities despite the devastating war have made it successful in maintaining the monuments that are classified as a “World Heritage”.

Since its establishment, the department launched intensive media campaigns aimed at promoting its goals, plans and work. These campaigns helped to bring its voice and struggle to the attention of UNESCO.

Suleiman al-Isa, the director of the Department of Antiquities, told Enab Baladi that Bosra Sham has been a World Heritage Site since 1980. This makes UNESCO responsible for promoting and supporting the only party working on preserving, maintaining, restoring and documenting the city’s artifacts. “We were able to strengthen our engagement with the organizations and people interested in the field of antiquities and cultural heritage. We have also presented our achievements and work, which are line with professional standards of work in the protection and restoration of archaeological sites in the old city.”

The department’s work has attracted a lot of attention and helped it to gain the confidence of many international bodies and organizations. It was invited to attend a workshop held in the Jordanian capital, Amman, last November entitled, “The Future of the Past”.

What Did the Workshop Address?

The workshop covered topics relating to how to protect cultural heritage in Syria and Iraq during conflicts and wars. It also dealt with the methods used in documenting museums and artifacts and how to protect museums. The workshop was attended by the Department of Antiquities of Bosra Sham.

“We made a detailed presentation on several topics, from the establishment of the department and its work to the achievements that we have realized in the last period. We also focused on the importance of Bosra Sham city as a World Heritage Site. We also emphasized UNESCO’s responsibility for sites in the city and protecting it from bombardment and destruction”, al-Isa told us.

In his speech, al-Isa talked about the needs and difficulties the department is facing and the need to provide all the necessary resources for them to complete their work “as a civic independent institution not affiliated to any party”.

The participation of the Department of Antiquities of Bosra Sham in the workshop was an opportunity that the department was able to benefit from, according to al-Isa, who explained that they were the only organization participating from Syria, “We were able, through this participation, to report the big struggle and difficulties we face in our work, especially the lack of financial support that is necessary to continue working in the protection of archaeological sites, which are exposed to vandalism, destruction, tampering and potential landslides as a result of bombardment with explosive barrels by al-Assad’s forces.”

Through participation in the workshop, the department gained experience in professional photography in order to document artifacts in the museums of the city. According to al-Isa, this is important in improving the department’s work, “Documentary photography is essential at this stage since the sites and artifacts are exposed to shelling, destruction and vandalism, and all of this should be documented.”

The department received promises from the institutions involved in the workshop, especially the Metropolitan Museum of New York, to provide the necessary expertise in order to complete the documentation process in a scientific, valid and accurate way.

“Through this, we have achieved part of our work plan that we set when we established the department. Now we are focusing on the transition to the next steps, as soon as we get the necessary support”, said al-Isa.

At this stage, the department needs equipment for repairing and documenting artifacts, in addition to projects to guard and protect heritage sites. In addition, some sites need urgent restoration, according to al-Isa, who explained, “Some sites have cracks that can lead to collapse, and that’s due to the fact that the sites have been bombed with explosive barrels and vacuum missiles”. Bosra Sham Castle and al-Kliba are the sites most at risk of collapsing.

The Activities of the Department of Antiquities

The “successful” experience of the Department of Antiquities represents an example in organized work to maintain antiquities. The city’s visitors today would notice the care and attention that the Islamic Bosra Sham castle and its Roman amphitheater is receiving, along with other sites in the city that welcome dozens of visitors and families, after the department launched an action plan to promote tourism.

“At the department, we organize recreational and educational trips for school students such as visiting the castle and the heritage sites. We also participated in a campaign organized by UNESCO under the slogan ‘United with Heritage’. We aimed to raise the awareness of students on how to preserve heritage and antiquities.”

The Opposition is “Out of Reach”

Amid the regional and international attention, and with the great efforts made by those who are involved in the preservation of Bosra Sham’s antiquities, the absence of official opposition bodies and the Syrian Interim Government is evident. The only contribution was by the opposition “Sunni Youth Forces” group, which took the initiative of guarding and protecting heritage sites. The group has also provided a special battalion to work in collaboration with the Department of Antiquities in Bosra Sham in order to protect and guard the sites from vandalism and theft.

The Sunni Youth Forces have also contributed to a clean-up campaign and to removing the remnants of destruction and devastation that ruined the image of the area.

In contrast, al-Isa explained that the fact that the Interim Government removed the Ministry of Culture from its current composition has had a negative impact, psychologically and morally, “When you remove a ministry that is concerned with cultural affairs and antiquities, this has a negative impact and indicates neglect for our heritage and Syrian culture that is rich with sites and ancient historic cities.” However, he also hailed the major role played by residents of the city and their determination to maintain and restore archaeological sites despite the difficulties they face.

The Syrian Interim Government, headed by Dr. Jawad Abu Hattab, has removed the Ministry of Culture and Family Affairs in its new line-up and replaced it with the Family and Women’s Support Commission.