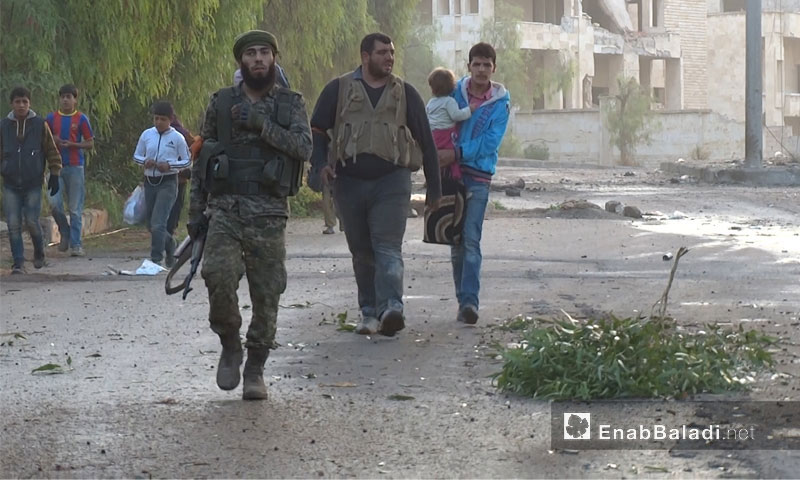 “It was a very confusing few moments. We were in battle and in direct confrontation when a family suddenly emerged from the buildings, fleeing from the horror of what was happening,” said Iyad  al-Mohammad, the leader of one of the fighter units operating in the western Assad Suburb in Aleppo city during the battle to gain control of the area on 28 October.

Al-Mohammad explained, “It was a battle within a battle. How could I fight the Assad forces and at the same time protect this family from danger? I remembered at the time the strict orders we had received to protect civilians, even at the expense of achieving our military objective. So I asked two members to provide cover on the street between us and the family and I signaled to the family to run in our direction. Despite this, they were targeted by the regime mercenaries, but thank God they arrived to where we were safe and sound.”

The family was placed in an evacuation car, prepared for such cases, which took them to a safe place far from the battle zone.

Al-Mohammad, a fighter in his twenties, said, “It was difficult, but it strengthens our sense of humanity to protect the families of those you are fighting. Assad Suburb has many residents who are fighting in Assad forces and among his Shabiha but the families are certainly not guilty and it is our duty to help and protect them.”

What is shocking, according to al-Mohammad, is that Assad’s warplanes and his artillery bomb the suburb that houses his fighters’ families. He said, “It shows the degree of Assad’s brutality even in dealing with the families of his own fighters… This is their nature, they do not care about any civilian even if the civilian supports the regime.”

Assad Suburb is considered a human warehouse for regime fighters and their families. The area includes housing built for officers who moved to the city from their hometowns due to the Suburb’s proximity to the military colleges and academies in Aleppo.

Abu Yousef al-Muhajir, the military spokesperson for Ahrar al-Sham Movement, said to Enab Baladi that the military command of Jaish al-Fatah issued strict orders regarding how fighters deal with civilians in liberated areas . Fighters were ordered to evacuate civilians immediately from the areas of fighting and to treat them respectfully and humanely during their evacuation.

Abu Yousef added that the area did not have any civilian vehicles to help evacuate the residents, so the opposition fighters were forced to use military vehicles to evacuate the civilians immediately as the fighting was intense and there was heavy aerial bombardment during the evacuation operation.

Assad’s Forces Prevent Residents from Leaving and Give them Guarantees

One of the citizens leaving the Suburb, who refused to disclose his name, spoke to Enab Baladi about the reasons behind them remaining in the area despite the military operations. He said that the Assad forces had prevented them from leaving the suburb and gave them guarantees that the area was safe and that opposition fighters could not reach the area.

“But the exact opposite happened. In less than an hour, the Assad forces had fled the area and left us to face the unknown and we were truly afraid”, he said. “They told us the fighters were slaughtering civilians and killing them in cold blood, and that they were there to protect us. Thank God these were all lies. The fighters of Jaish al-Fatah helped us, they secured the roads inside the Suburb and evacuated us in cars to areas far from the confrontations, and now we are safe.”

A Message to Civilians in Areas Under Assad Forces’ Control

Majid Kamil, a military leader in al-Sham Legion, sent a letter through Enab Baladi to civilians living in areas under regime control in Aleppo city. In the letter, he insisted that civilians must move away from locations where the Assad forces were concentrated and that they must not be afraid if the opposition gain control of a particular area. They must act calmly as they would be evacuated and their safety ensured without any harm.

The military commander promised civilians that they would not be harmed or mistreated in any way and reiterated, “Everyone who does not take up arms against us is safe.”

Jaish al-Fatah entering populated areas is considered a new event in Aleppo city, which has forced the group to change how it deals with these areas to ensure that no civilians are harmed. Perhaps what happened in Assad Suburb is evidence of the high standards of fighters in dealing with such cases.