Syria’s famous industries on its way to extinction 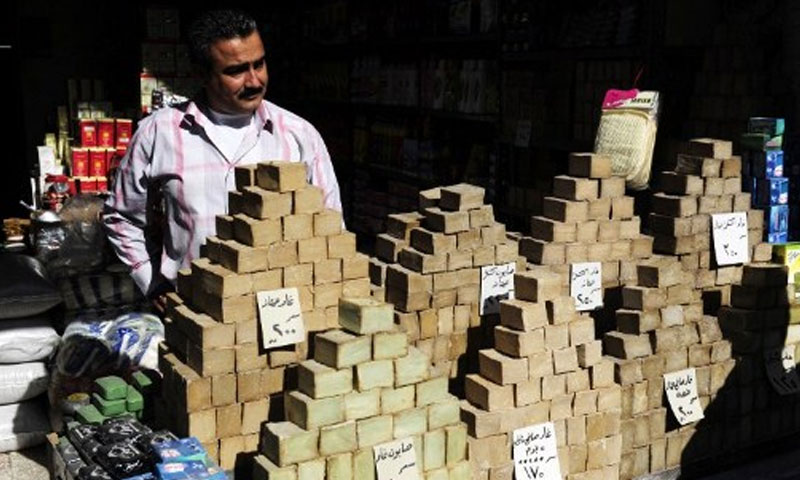 The effects of war that broke out a few years ago in Syria were not limited to human and social losses, they also affected Syrian industries that were famous throughout ages, such as handicrafts industry, like glass, copperplate, weaving and others.

The damage affected the handicrafts exceeded 80% due to war and its aftermath, for many reasons notably, the reduced demand for the products after tourism sector has been paralyzed, which used to be the big market for these products, in addition to the residents’ reluctance from buying because of the high prices that reached record prices due to the rise in their costs.

Some of the main reasons that affected the decline of these industries is the retirement of a lot of workers, as well as the migration of “elders craftsmen” to the Gulf, after giving them attractive offers post-losing most of their workshops due to the war.

One of the most famous industries that is declining in production is the soap of Aleppo known as “Aleppo’s green gold”. It is considered one of the oldest kinds of soap ever. It widely spread all over the world, because it contains natural substances as well as vegetable oils that benefit the skin.

Most of the soap factories, estimated with more than 60 factories, were exposed to indiscriminate shelling, and their locations turned into front lines, while the export trucks were targeted.

All of these reasons have led to the erosion of this prestigious industry in Aleppo, and to head towards extinction in light of the continuous war. Before 2010, about 600 tons of soap used to be exported to the world.

Among other famous handicrafts that are disappearing is the Syrian handmade textiles; this industry roots back in history to thousands of years, as it is believed that Syria is the first and oldest home for this industry in the world.

There are more than a 100 kind of handmade textiles, and each kind has more than 20 varieties, such as; brocade, damask (relating to Damascus) and Aghabani.

The weaving industry was exposed to many obstacles in the past few years as a result of war that led to reduction in the production by 50%.

The copperplate sector was not in a better condition than the above mentioned, it has witnessed a huge decline in the past years due to the retirement of a lot of workers in the profession.

The sector that Syria has been famous for throughout history, is now in the extinction circle due to the high prices and the Syrian citizens’ reluctance from buying any products as the prices reached 3500 USD, in addition to the cease of tourism that used to represent the largest percentage of customers’ sector.

Damascene mosaic is considered one of the oldest prestigious professions that the city of Damascus was and still is famous for. It is the art of wood inlays with seashells or the so-called mosaic, inlaying the seashell’s material into parts of different kinds of wood.

Fouad Arbash, president of the craft Assembly of Eastern products in Damascus, told the local media in 2010 that there are 150 craftsmen associated to the assembly, out of which a 100 craftsmen work in the wooden mosaic industry and a 50 craftsmen work in mosaic manufacturing, stained glass, glass painting and seashell inlaying. Products worth of more than 100 million Syrian pounds were exported abroad annually before war.

However, the industry faced a significant decline over the past five years due to the lack of products’ selling and the high prices.

Damascus city was famous for glass manufacturing for thousands of years, to the point of making it an exemplary proverb, “thinner than the glass of Damascus.”

The stained glass is one of the oldest crafts in Damascus that goes back in history to 2000 years. The name (Moaashaq) ‘stained’ was derived from the coherence of the plaster substance with glass, this coherence was described as (Isheq/passion) because of the cohesion and harmony between colors and plaster.

Marwan Dabbas, President of Craftsmen Union in Damascus, warned last June in an interview with Al-Watan newspaper, favored by the Syrian regime, of a rapid decline in the numbers of workers in handcraft professions and crafts within Syria.

He explained there are “difficulties facing craftsmen sector, which is the continued attrition of labor force till the point where we can say it is almost non-existent”, asserting that the present craftsmen are mostly novices and need a long time to acquire the required expertise.

Dabbas added that the wages of labor force have risen tenfold, which affects supplying them in light of the absence of markets to sell all these craft products.

Syria’s historical heritage is at stake of loss and extinction, unless war comes to an end, and an agreed-upon government sets steps that would bring back the glamour of these industries, which tell the story of thousands of years in Syria.