The regime’s government abandons the support of diesel, gasoline and gas… and raises the prices 30% 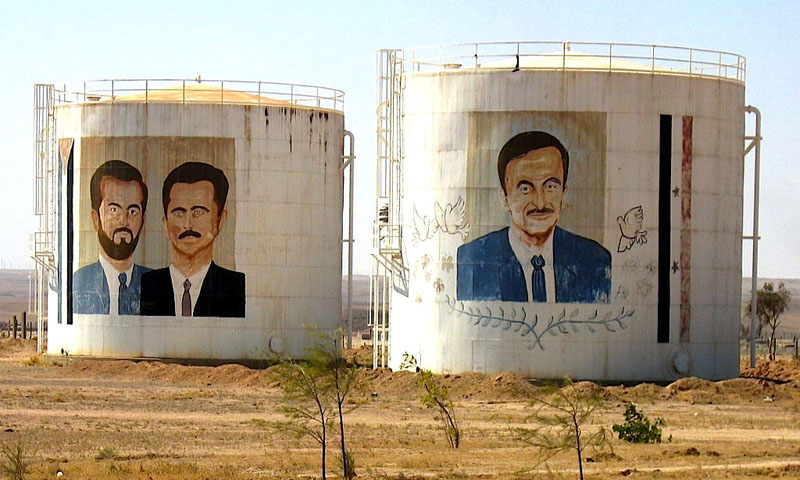 A study of rationalizing the prices of oil derivations, revealed by the Oil Minister in the regime’s government, Soliman Abbas to Al Watan local newspaper, introduced an intention of the Caretaker Government headed by Al Halki to raise the prices of oil derivations, and compensate salaries with a 7500 Syrian pound (16$), in a move that can only be interpreted as “an increase in the governmental deficiency and inability to support basic commodities and oil derivations”, after there has been a complete cease of oil exportations, which used to produce an annual of 2.5 billion dollars.

Immediately, the Ministry of Domestic Trade and Consumer Protection, on June 16th, issued three resolutions under which the prices of oil derivations were raised 30%, without mentioning any financial compensation in return. After the Oil Minister asserted the price raise saying “there is a study to rationalize the prices of oil derivations by many specialized committees, including the economic policy-making committee, in a way that suits the changes that affected the exchange rate and the global rise of oil prices, in addition to the price rise of transportation and shipping costs of oil derivations…which requires changing the prices in order to meet the huge differences that took place.”

Loans were no benefit

Since the outbreak of the protests, the regime’s government strived to support the policy of “raising the support” in order to face the costs of the production process and to reduce the bills of importing necessary products, especially those of oil derivations (gasoline and diesel), whose importation has become the “best” solution to providing them in the market, after the oil industry has been dramatically damaged, and after the government has lost control of most of the wells and fields east of the country. To this end, the government sought resources to fund the derivations with “deferred payment” through credit loans from allied countries. The government was able in 2013 to get credit loans estimated at 3.6 billion dollars on payments in order to supply food products and mainly diesel and fuel.

In June 2015, the President Bashar Al-Assad issued a decree for ratification of the agreement of a new credit line facilitation from Iran estimated at a billion dollar. At a time when analysts considered this line or support coming through Iran to be “dynamic”, serving as a lifeline to the regime’s government, which is seeking products with subsidized costs from the source, yet, the continued decline of lira against the foreign currencies dispels this interest, due to the increasing gap between the income and spending in the different areas of Syria, whether it be controlled by opposition or the regime.

The loans are about to expire and there are no indications of the regime’s government intention to make more agreements at the moment, especially after Moscow failed to provide Damascus with a loan of a billion dollars in 2014. According to an economic analyst who asked to be anonymous, this “will make the rise in price an inevitable end and a final solution that the citizen has to carry the burden of, after the state has abandoned its duties to support it”, noting that the price rise will lead to raising the costs of production prices with a rate approaching a 100%.

A New Government with no revenues

According to a study prepared earlier by Enab Baladi, that despite the general raise in prices and the inflation high rates rising up to 500%, yet the regime’s government continues to raise prices of products that are supposedly supported, including bread and Oil derivations, seeking new revenues for the regime’s treasury and spending-reduction, which portends of a leap in the inflation rates and consumer prices during the upcoming period. In fact, Minister Abass saying that “the support for the diesel reached 92 Syrian pounds per liter, as it was sold for 135 pounds, while the cost reached 227 pounds”, and saying that the gasoline is supported with around 73 Syrian pounds as it is being currently sold at 160 pounds, while the cost reached 223 pounds, can only indicate a real need to raise the prices of fuel, which will negatively affect the life of citizens, industry and mainly transportation.

The Oil Minister, who is leading a “propaganda” for the past and future government talking about the amount of governmental support that is exhausting/deriving the government, is

Leading a “propaganda” for the past and future government, talking about the amount of governmental support that is exhausting the government, in addition to the efforts spent to provide fuels considering the circumstances of the country, the state of war and the raise in costs, the Oil Minister is trying to promote a positive image of the government in the minds of the citizens and its support of the essential products, since the price of a liter of diesel in areas under the regime’s control is 135 Syrian pounds and is somehow stable, while it is sold at a higher price in opposition areas since it mostly comes from areas under “the State organization’s” control, so is gasoline, which is sold at 160 pounds per liter and it is also stable and available. The same goes to the gas cylinder, sold at 1800 Syrian pounds. Therefore, there is no harm in moving the prices up in line with the raise in the exchange rates and in order to reduce the burden off the government. Soliman asserts that “the support will continue, however, it will be carried out in a way that suits the circumstances of the crisis and the potentials, so that the support will range between 10 and 25% for each of diesel and gas, with a less support to the gasoline, in a way that suits the vast differences for the materials of gasoline and diesel.”

A negative impact on what is left of industry

Decisions to raise prices of energy carriers, in any country and under any circumstances, will be reflected negatively first on the economic sectors which depend mainly on energy, especially industry, since the production requirements will be affected, the prices will rise and so will the costs of the final product. As a result, there will be an inflation in prices that the government may not be able to face, at the current moment, for the regime’s government, the new resolution contributed in “pouring oil on fire”, as described by Fares Shehabi, president of the Union of industry chambers, who says in response to the resolution of raising prices of energy carriers “the costs of production will rise and so will the prices, and therefore the inflation vortex will get stronger, so that we would have to raise the derivations’ prices again in the near future, without being able to raise wages or production in order to address this growing inflation.”

In his opinion, “they were supposed to at least follow an operational supportive and incubating policy that gives stimulations and necessary exemptions for small-wage earners, farmers and small and medium-sized industries, as well as all the productive classes in the damaged areas, in order to help them recover and survive, and to have a positive economic equation in favor of the economic activity against the high prices and inflation, in a cumulative growing and stable way and not in favor of high prices and inflation.”

In order to legitimize the resolution of raising the prices and make it minimally acceptable to citizens in the areas under the regime’s control, in addition to justifying the government move, the regime’s government (in general), along with the Ministry of Oil and Mineral Resources always remind of the prices of Oil derivations in Syria compared to neighboring countries, especially in Lebanon and Jordan, without considering the circumstances of the production in these two countries, and the unjust comparison with Syria, since the latter has double the production of Oil and gas compared to those two countries.

Soliman says “the fuel prices in the neighboring countries are higher than the local prices, which encourages unscrupulous people and smugglers to trade these materials and smuggle them outside the country, which needs to be addressed according to the government’s approach to rationalize the support and re-examine the study and adjusting the prices.”