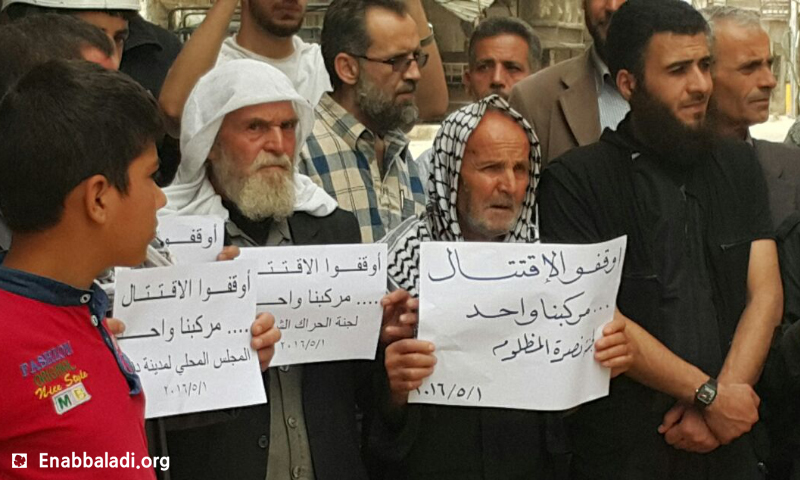 The Army of Islam announced it had accepted an initiative by the people of Eastern Ghouta that includes a ceasefire between the faction Faylaq al-Rahman, and Jaish al-Fustat, after four days of clashes that have killed militants and civilians.

The agreement came out of “eagerness to stop the bloodshed and turn the guns back in the right direction,” according to a statement issued by the Army of Islam on May 2.

The statement said Faylaq al-Rahman’s response on Saturday was “mockery, disregard for bloodshed, consecration of the division of Ghouta, and confirmation of their wrongdoing,” adding that the leader of the group, Abu al-Nasr, said this is the best the Army of Islam can do and that his group will not accept anything other than the current situation and establishing the issue as it should be.

The Army of Islam published the eight items of the initiative, which include: opening public roads; cancelling all displays of weapons in the liberated areas; bringing in food and medical teams and transporting wounded to hospitals immediately; not attacking ambulances or civil defense vehicles and easing their work; the return of every faction to the place where it was before last Wednesday; releasing all prisoners on both sides; not attacking fighters’ families; and returning bases, tunnels, properties and weapons to every faction as they were before Wednesday.

The clashes have incited the anger of the people of Eastern Ghouta, especially after civilians were killed by snipers in the areas that witnessed the clashes between the two sides.