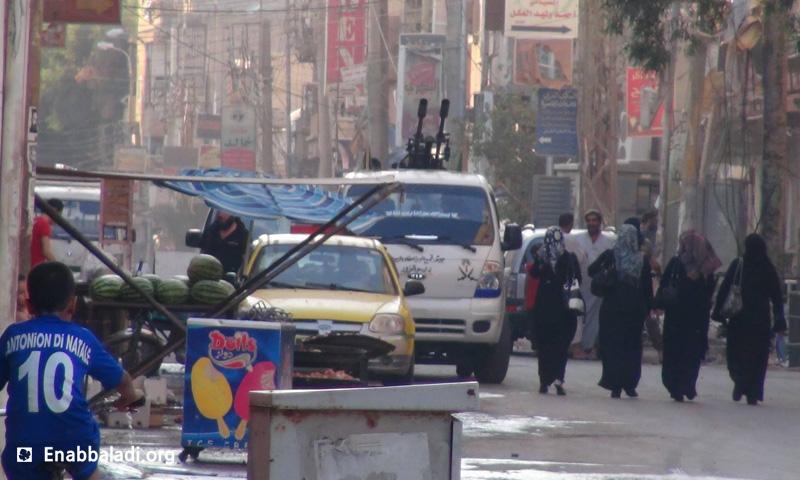 The daily economy in Der Ezzor province runs within three different commercial markets of different criterion and authorities. Despite the close distance among these markets, yet they differ in the prices of the displayed products and the volume of buying and selling movement within.

According to the residents interviewed by Enab Baladi, a number of factors took part in reaching the status quo, notably is the continuous war and siege imposed by “ISIS” organization on some areas in the city, which created in return different needs and products for each area with different prices depending on the security condition, freedom of people’s movement and the product’s movement.

The rules imposed by ISIS have influenced the local market through the price rise of some taboo goods and reducing their quantities, such as tobacco, alcohol and imported meat, in addition to the chicken which was reduced due to the tight restrictions by ISIS on slaughtering methods, while imposing a specific dress code in the areas of ISIS control, the thing that forced people to purchase the imposed dress, which had an increasing demand.

This economic movement created a new commercial aspect that differs from the situation five years ago and new centers of financial forces in the society.

Markets according to populations

Der Ezzor markets are distinguished among each other according to the characteristics of each one that relate to the demographic quantities, qualities and the security condition in the areas, as well as how far or close they are from the battlefields.

The first market is located within the city areas under the control of ISIS. The steering wheel of this market relies mainly on the money injected by the organization. This market is represented by Al Tekkaya Street which was turned into a center of economic activity, despite the destruction that hit large parts of these areas considered military-like areas, in light of the frequent shut down of Al Syasie bridge – the only land port to get products – and which the organization allow only a limited number of trucks and people to cross it.

The second market is located inside the areas controlled by the regime and which the siege prevented its prosperity and affected its resources, even though financial fluidity exists, yet the market is incapable of meeting the huge demand. Aviation is the only method of providing the market with products, in addition to some crafts, simple farming industries. The narrow space of these areas helped enabling the market’s growth despite the shortness of its goods.

The third market is constituted of the centers of towns and villages located away from the fronts in the countryside of Der Ezzor and which are controlled by the organization. These markets flourished after its liberation of the grip of the regime at the end of 2012, supported by many factors notably the population density, the abundance of financial resources caused by the “oil boom” in the countryside, in addition to its location that kept it away from destruction. The most important market is Al Mayadeen market in the east of countryside.

Markets vary but problems are the same

Despite the difference among the three markets, however, the commercial process parties almost agree on their problems, notably the high prices, the traders’ deceit of products’ quantities, in addition to the lack of scrutiny by the authorities of each area.

A wide number of traders admit the sufferings of the residents, but they also reflect their disability. A shop owner in Al Qusoor neighborhood (preferred to stay unanimous) says; “we are the residents and we suffer just like they do, but we want to work and live”, adding “I have the right to make profit and that is the goal of each trader.”

A wide number of traders admit the sufferings of the residents, but they also reflect their inability. A shop owner in Al Qusoor neighborhood (preferred to stay anonymous) says; “we are the residents and we suffer just like they do, but we want to work and live”, adding “I have the right to make profit and that is the goal of each trader.”

The residents agree that traders should make a profit as long as it is “logical”. In her interview to Enab Baladi, Um Ali, who lives in the neighborhood, says that the traders are taking advantage of the residents in an unacceptable way, in the light of the absence of scrutiny and the negligence of price control.

Kasem, a former employee at the municipality of Der Ezzor, described the situation in the markets as “a public robbery”, pointing in his interview with Enab Baladi that “many traders are corner the market and sell the products with the prices they ask for under the protection and the supervision of the regime, who has his share of the profits.”

According to Kasem, the situation does not differ much in the areas under the organization’s control, who sees that “the privileges and influence granted for some traders in those areas enabled them to rig and corner the market,” while traders consider the absence of a clear limit on the USD exchange rate reflect on all aspects of life.

Despite the fact that products are similar among the markets of Der Ezzor, yet their prices vary especially the products of precious metals market (gold and silver), due to the traders who often manipulate prices, taking advantage of the residents’ inability to purchase their needs elsewhere.

While the price of one gram of gold in the areas outside Der Ezzor is 18 thousand Syrian pounds, the price in the city itself is 18300 Syrian pounds. The same situation applies to the USD exchange rates and the commission of money transfer.

According to the residents of the areas under the control of ISIS organization that the latter helps those traders who control the market by sealing the city and preventing any products to leave it, the thing that cause the drop in prices of the products inside these areas especially furniture, compared to the prices outside the city borders.

The markets outside the city suffer from other problems, notably is the absence of restrictions. Hasan, a resident of AlCheish (the army) Street in the city of AlMayadeen, points out that “the absence of scrutiny created increasing problems and facilitated chaotic markets easily preyed by traders, who are governed by interest.”

Abu Abdullah, (an anonymous name) a resident of the city of AlBukamal, who is close to the “state” organization, considers “what is going on is only freedom in the movement of markets and trade”, pointing in his interview with Enab Baladi “that we should not prevent such freedom as long as it is within the legislation of Allah.”

Emad, a student at the Economy Faculty in Der Ezzor and a graduate of the Faculty of Sharia in Damascus, discusses the declining effects of having the markets free and open, saying; “there are certain laws regarding cheating in selling and results in its annulment. There are also legitimate laws that regularize the commercial process, as there is no absolute economic freedom in Islam.”

In his interview with Enab Baladi, Emad sees that “imposing proper investigators to control scrutiny and the laws helps both parties of the commercial process and ensures the buyer’s right without wasting his money or rights.”

A saying passed around by the residents of the besieged areas says; “we are surrounded by Daash (ISIS), Halesh and Abu Tafesh” describing their situation amid the spread of the regime’s brokers and militia.

The market is also famous for selling the relief goods which are supposed to get to residents as aids, instead they get smuggled to the black market through “corrupt” people, as described by the residents, within the humanitarian organizations or through members of the regime.

The price of one carton of relief aid is up to more than 25 thousand Syrian pounds, something that created a small number of new traders, who rely on a security and military force that support them in cornering and pricing the market. They have also established profitable projects through a brokers network that cash the bribes on behalf of the security authorities.

The persona that the residents talked about in their saying, “Abu Tafesh”, was one of the traders who smuggled their money to Turkey, where he is currently running projects, while the residents of the besieged neighborhoods suffer of starvation, according to Haj Abu Saleh, who lives in the areas under the regime’s control.

In his interview with Enab Baladi, Abu Saleh reflects saying; “the most painful fact is the silence regarding the pain and the sufferings of about 185 thousand civilians in Al Jawra neighborhood.”

The 70-year-old Haj lives, with those left of his family, feeding on dried bread and whatever grass grows in the small garden of his house. He concludes saying; “a year of siege took the lives of everyone in these neighborhoods, but the real pain is what those traders and brokers commit against civilians, in light of the rise in the costs of living, working and even traveling.”

As the military situation of the city of Der Ezzor remains vague in light of the ongoing battles on its fronts, the residents fear the vanishing of both markets (that of the regime and ISIS organization), especially after the setback of the commercial activity and heading to new important and more lively centers such as the markets of the cities of AlMayadeen and AlBukamal.

Observers of the situation believe that the conditions of the markets is tied to the military developments in the area, which remain up till this moment vague. However, the rapid military and political changes give way to many possibilities of forming the next economic map in Der Ezzor, which is considered a significant commercial gate with Iraq and a reservoir of agricultural and oil resources.