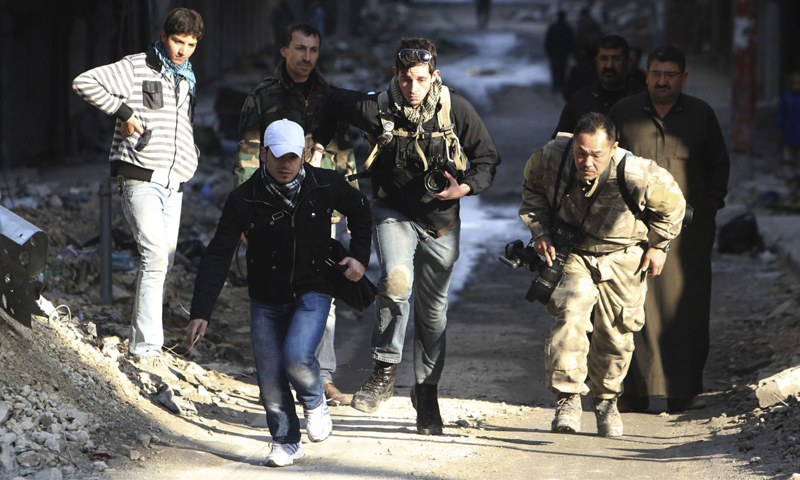 The American journalist Kevin Dawes was released after 3 years of detainment in the Syrian prisons and after “secretive” correspondences conducted by Washington and Moscow which finally succeeded in putting the Syrian regime under pressure and indeed releasing him. The Russian army transferred the journalist to Moscow and handed him over to the US embassy in there to soon leave the Russian territory.

The Washington Post newspaper reported earlier through US officials the news of releasing Kevin Dawes who was detained after traveling to Syria in 2012.

Mark Toner, US State Department spokesman, told the news agency “Reuters” that the man was released a few day earlier and that he left Syria.

This negotiation process between Moscow and Washington on one hand and the regime on the other reminds of the phenomenon of Journalists detainment or kidnapping, which each of the Syrian regime and ISIS use to serve political gains and negotiate over profits, in a flagrant violation of International laws/regulations related to the freedom of press, the International humanitarian Law and resolutions of Security Council.

Denying Journalists’ detainment… but releasing them

Dozens of journalists were kidnapped on Syrian lands during the past three years. While the Syrian regime announced to be irresponsible for or denied the kidnappings, the State of ISIS publically declared field killing operations of foreign journalists on Syrian territory.

The Syrian regime consistently denied responsibility for the arrest of the American journalist Kevin Dawes, which Russia played a main role in his release on Friday, April 8th as the US State Department declares, as Dawes stayed in Syrian prisons for three years until he was allowed to contact his family before his release. This proofs that a number of foreign journalists are still languishing in the Syrian prisons, perhaps Austin Tice, who also went missing in Syria in 2012, is one of these detained prisoners.

The reason behind releasing the American journalist by the Syrian regime is still ambiguous. The release could be considered a gesture of good will to the International community prior the new round of Geneva negotiations taking place on the 13th of this April. Nevertheless, and regardless of the reason, there is a victim in here, the journalist Dawes, who unjustly spent three years in prison, and was only released with international pressure. Many more are just like Dawes.

In February 2015, the Syrian regime authorities arrested the Swedish journalist, Joachim Medellin, at a checkpoint in the city of Qamishli, along with his interpreter. The two were put in prison until they were released in a swap between the regime and the people protection units in that area. The journalist complained then of ill-treatment and long interrogation sessions about his work and the reason behind coming to Syria, especially that he had no visa.

Execution of Foley and Sotloff

James Foley, an American journalist, was kidnapped on the 22nd of November, 2012.by ISIS to soon be seen in a special broadcast with another English speaking journalist saying; “his fate (James’) depends on the next decisions made by the White House.”

The other journalist, who was speaking during the former’s broadcast, was the Israeli Steven Sotloff (31 years old); a writer at the Times and Foreign Policy magazines. He was kidnapped near the borders between Syria and Turkey in 2013.

ISIS released a beheading video of Foley in August 2014. On September 2nd, 2014, ISIS announced the beheading of the journalist Sotloff.

The escalation of the International coalition attacks over the areas controlled by ISIS in each of Syria and Iraq, which were led by the United States, pushed ISIS to expand his targets to include everything that relates to the interests of the states participating in this alliance. ISIS beheaded two Japanese hostages; Kenji Goto in January 31, 2015, and Junko Aacedo almost at the same period, following the failure of the indirect negotiations between Jordan and “ISIS”, as the latter demanded the release of Sajida Al Rishawi in exchange for the release of the second Japanese hostage.

ISIS also demanded Japan to pay a ransom in order to release the hostages, however, since the negotiations came to a standstill, ISIS went ahead and executed them.

“Money” in exchange of French Journalists

On the other hand, the past periods have witnessed the release of a number of journalists by Jihadist groups and “ISIS” with no return for the release. In March 30th, 2014, the Spanish Newspaper “El Mundo” reported the release of its reporter, Javier Espinosa, and the independent photographer, Ricardo Garcia Vilanova, who were kidnapped in September 16th by “ISIS”, according to the newspaper. In March 2nd, 2014, the Spanish journalist, Marc Marginedas, who was kidnapped in the downtown of Hama, was also released.

In June 2013, four French journalists were kidnapped near the city of Aleppo and the kidnappers were believed to be members of ISIS organization, until a money deal succeeded in their release according to the media sources. The journalists are; Didier Francois, works as a reporter for the radio station “Europe 1”, Edward Elias, a Press photographer, Nicolas Henin, a correspondent at the French “Le Point” magazine and Pierre Toure, the “Arte” Franco-German channel correspondent.

According to a report issued by Reporters Without Borders, Syria came in first place among the world’s most dangerous country for journalists due to the number of journalists killed in Syria while covering the conflict. The report estimated the numbers of detained journalists by non-governmental groups to be 26, noting that 18 of them are still in the grip of “ISIS” organization alone in Syria and Iraq in particular. The report pointed out that 26 journalists –out of 54 kidnapped journalists around the world- are still being held hostages in Syria until the end of 2015.

The International humanitarian law: the appendix article (79), of the additional protocol of civilians’ protection during military conflicts in Geneva Agreement for the year 1949, states the respect of civilian journalists performing their jobs in armed conflicting areas, treating them as civilians and protecting them of all forms of deliberate attacks, as long as they would not participate in acts that would contradict their civilian status.