Strolling gigs spread “randomly” in the neighborhoods of Aleppo 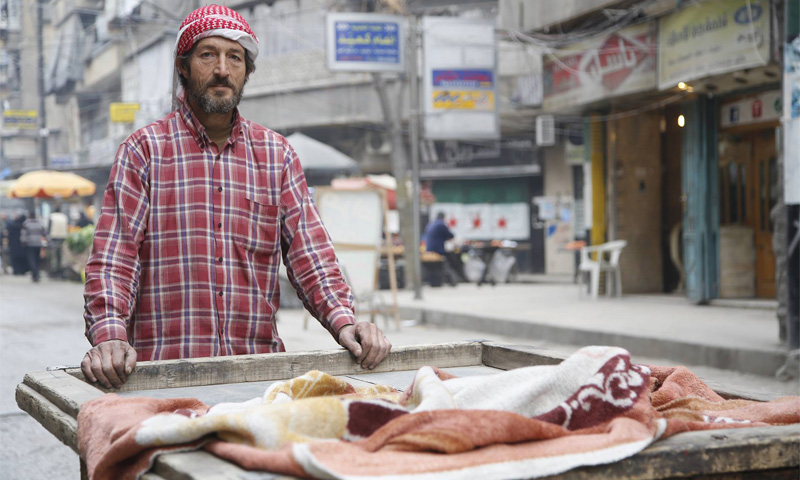 “I work for nine hours selling bread, despite the recession, the high prices and the lack of resources. What I make is only enough to buy a pack of eggs and some tomatoes.”

The owners of the strolling gigs, which spread in the majority of the city of Aleppo, suffer difficult living conditions due to many obstacles they face, most notably is the huge numbers of people working in this field, in addition to the absence of an authority to determine the numbers and organize their work.

Mohammad Shamoqa, a 40-year-old resident of Bustan AlQaser neighborhood in Aleppo, works as a peddler and sells bread. Even though he works from 11:00 AM to 8:00 PM, he does not make enough money. He told Enab Baladi that “there are no work opportunities available”, considering what he makes on a daily basis, which is about 2 Dollars, is not a fair payoff, as it does not feed his family of 5 people.

The products sold by these peddlers vary between fruits and vegetables and other consumable products that people need on a daily basis.

Abu Saleh, a 62-year-old, who lives in Bustan AlQaser neighborhood, moves his wagon along a completely destroyed building in the neighborhood, and sells fruits and vegetables. He told Enab Baladi “I worked as a peddler before the revolution, as I could not afford a shop to sell my products”, he added, “I am still incapable of affording one in the light of the rising prices and the overcrowded population in the neighborhood.”

Abu Saleh gets off to work at 7:00 AM till midnight. He attributes the rising prices in part to “the recession especially after the workshops and factories have closed”, pointing to the fact that the expensive prices of vegetables are due to the high costs of transferring it to neighborhoods.

Residents tend to buy of gigs

According to Mohammad Nour, who lives in the Eastern neighborhood of Al Ansari, residents of Bustan AlQasar, Shaar and adjacent neighborhoods tend to buy their needs of the strolling gigs. He told Enab Baladi that he purchases his needs of the gigs that pass by in front of his house “because they are cheaper than the shops.”

Abu Wael, who lives in the same neighborhood, purchases his needs of the gigs “because they are cheaper, yet of a less quality”, saying that “I have to cut off my expenses as much as I can due to the difficult conditions that I am going through.”

The gigs go around with no organization or control in the liberated neighborhoods of Aleppo. Breeta ALHaji Hasa, the chief of local council of Aleppo city, explains to Enab Baladi that the council does not have the workforce to organize or numerate the peddlers.

Haji Hasan refers to the fact that the council is currently working with only 5% of his workforce on both administrative and technical levels. He points that the geographic area covered used to include 20 thousands employee and their number has recently decreased to 589.

The economic situation in Aleppo was negatively affected due to the repeated targets by the regime’s forces to the liberated areas, which led to the displacement of the majority of the residents, leaving their neighborhoods behind. All people interviewed by Enab Baladi attribute the reasons to the difficulty of getting food to these neighborhoods and the lack of work opportunities which moved people from the middle class category before the revolution to a poor one after it, as they described it.