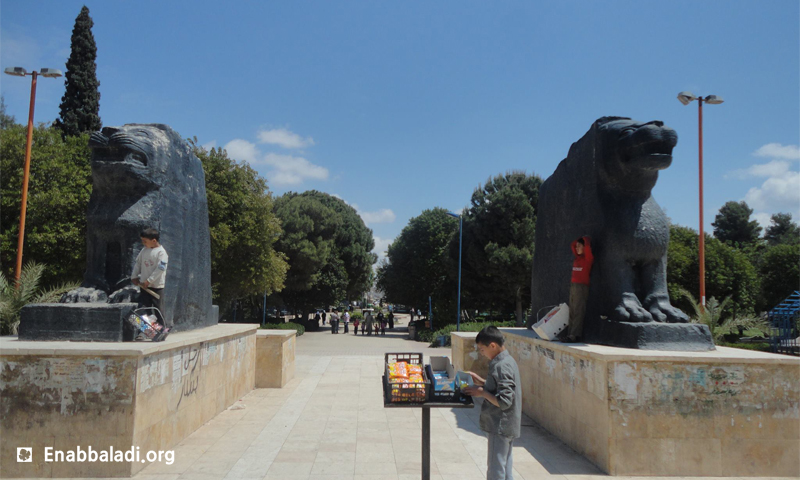 The members of the accountable system under the control of the “state” organization in the city of Al-Raqqa wanders the city with one of the citizens after sewing his mouth with metal wires upon accusing him of “defaming” the state. An image worthy of summarizing the conditions of the besieged city today, which has been restricted by fear and oppression, demarcating the borders of the organization’s areas with fire and gunpowder and establishing high walls of rules and prohibitions on the residents of the city.

You could almost hear nothing in the city other than the voice of AlBayan Radio FM, which is also subject to the organization, and even though the international coalition hacked it many times, yet it continues to broadcast their messages alone in the space of Al-Raqqa.

While missionary tents and media points were reciting chants and recorded religious speeches of the organization, the residents try, despite the fear, to break the severe media grip through radio appliances which came back to life and revived in the areas under the organization’s control, especially after the Fatwa (legal opinion regarding Islamic law) of prohibiting the television and “satellites”. In case someone is being caught with a radio at home or in the car, they would justify it with the desire to listen to the organization’s radio.

The restriction decisions issued by the organization do not include detailed or procedural lists nor does it include clear penalties, which allows the members of the organization a wide range of infringement on the freedom of the residents and assaulting them. Therefore, the penalties of those who have been arrested with the accusation of possession of contraband (radio and TV appliances) have varied.

Even though those regulations have been partially applied, some areas under the organization’s control continue to possess these appliances, as well as the organization’s headquarters and the homes of its agents. Yet some residents describe the situation to Enab Baladi as “shameful and sad”, as it is a deliberate isolation process in order to prevent them from communicating with the outside world, as they add.

Abu Ali, who lives in Al Thakaneh neighborhood (Barracks) inside the city along with a few others who stayed there after most residents migrated since it is a prominent gathering neighborhood for the organization, explains to Enab Baladi; “they prevent everything; their procedures included tightening scrutiny over internet cafes and shutting down many of them, as well as inspecting the phones of passers-by and carrying out periodic raids on the city’s neighborhoods.”

According to Abu Ali; the organization established a network of informers in order to help them tighten the control over the residents. He also considers that “the regime used to rule us with promulgate laws that we could object against, however, you cannot object over Fatwa and Divine laws or questioning them; any question is considered doubt, defamation and blasphemy.”

The hubbub caused by the recent laws of the organization regarding the prohibition of TV appliances, in addition to the members’ actions, impelled the organization’s members and their supporters to defend their point of view; in justifying those laws with “the protection of the Islamic State of Crusades, Western and secularism thoughts”, according to “Abu Moaz Al-Shami”, which is a self-given nickname to one of those organization’s sympathizers in Al-Mashlab neighborhood.

Although Shami did not officially join the organization, yet he holds daily missionary seminars in order to promote the organization’s thoughts, not to mention his readiness to defend their laws, considering in his interview with Enab Baladi; “it is our right, as the world gathered against us in our war and we must take action.”

Shami further believes that all those appliances and media (TV, satellite and internet) “aim against the internal organization front, incite people against Islam, spread division and disturbance, not to mention the evils that already exist,” adding that “constraints and arbitrary measures against all media and culture are necessary means to protect our security and peace of our land”. He justifies his words saying; “You cannot just leave the common people to their whims, otherwise they will go astray”

The organization tries to provide alternatives in order for their news to get to people and to compensate/substitute for other media (Al Bayan Radio), therefore, they distribute within their media points, which are spread in the city, daily publications and brochures in addition to free CDs in Fiqh (jurisprudence),  Akeeda (doctrine) and Tafseer (interpretation).

The organization stretches to get writers and intellectuals beyond its borders

Hasan, an activist from the city of Al-Raqqa, who was forced, like many others, to leave the city due to the organization’s threats, considers the recent regulations issued by the organization; “just like other totalitarian tyrannical regimes which seek to seize all of the details of the state and life; most importantly of which is media.”

According to the activist, and despite the departure of most activists from the city, yet fear continues to hunt them even abroad, since the organization’s actions reach the writers and ideas beyond the areas under his control; “the strongest evidence is the organization’s claimed responsibility for the assassination of Syrian activists in Turkey during the last months.”

According to activists interviewed by Enab Baladi; threats against those who stayed in the city continue in order to “subdue everyone”. One of them (who chose to stay anonymous) commented saying; “we cannot feel safe around daggers and silencers carried by extremists who sympathize with the organization or his mercenaries.”

The organization has a long list of prohibitions including printed, audio and visual media; anything that does not meet their beliefs, even other religious trends and doctrines that may contradict the organization. The residents of Al-Raqqa begin every day with a new regulation that extends this list.