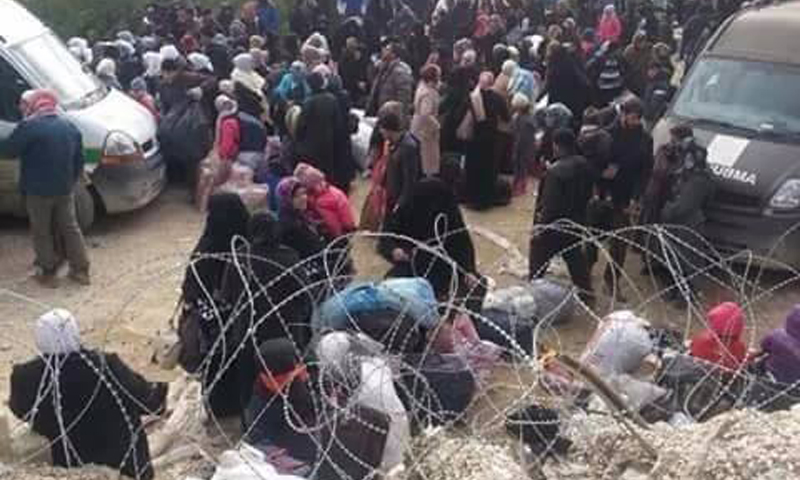 On Saturday April 2nd, the Turkish authority allowed the last remaining Turkmen families in the countryside of Latakia to enter their territory. 400 families (about 1.500 people), who were residents of the Kurdish and Turkmen mountains, were allowed to enter Turkey through Alyamdieh crossing border. The displaced were moved to Soroj camp on the Syrian-Turkish border near the village Ain Al Arab (Kobani).

Turkey allowed the displaced over the crossing borders to enter its territory after the continuous and intensified shelling by the regime’s missiles and artillery located in Zahia tower and Rabia and Al Alya mountains.

Lawyer Fadi Ibrahim, the representative of Lattakia city council in the National Coalition for revolutionary and opposition forces, explained to Enab Baladi that the council moved civilians after coordinating with the Turkish government attributing the reasons “to the fierce attack waged by Al Assad regime over the liberated countryside of Lattakia”, which forced the residents to leave their villages and flee to safe areas.

Ibrahim said that after the recent shelling involved all of the coast villages, Turkey started moving families to camps inside it, yet they preferred staying close to the borders within the Syrian territory. He added; “the destruction of the local council’s building in Alyamdieh village urged us to communicate with the Turkish government in order to move the remaining civilians in Lattakia countryside to Turkey.”

According to the local council statistics, more than a 100 thousand residents of the Kurdish and Turkmen mountains, who are currently in Turkey, entered it since the beginning of the revolution. Ibrahim said that those families who entered Turkey on Saturday included the last remaining Turkmen in the countryside of Lattakia.

Ahmad Wazir, a board member of the Syrian Turkmen mass operating in the mountains of Turkmen, considered that the regime worked long time ago to change the demography of the region, following a method of negligence to provide services to these villages they live in, pointing out to Enab Baladi “that all of this pushed the residents to leave their villages and head to the cities in order to educate their kids and provide them with a better life.”

According to Wazir, Assad Jr. carried out his father’s plan by assigning Miraaj Oraal, Brigadier commander of “Liberating Iskenderun”, also known as “Ali Kayali”, the control of the area. He opened a path for Alawite between Turkey and Syria. He also cleared Sunnah out of the countryside of Lattakia in order to establish Alawite state in there, “this is reinforced by the recent urge to Alawite families to settle in the areas he controlled in the mountain of Turkmen.”

Syrian Turkmen have lived years of neglect in the reign of Al Assad, who deprived them of their rights and stripped them of their nationalism, yet they have participated since the beginning of the revolution in both of its peaceful and armed stages. They have formed political parties and armed factions who continue to fight against the Syrian regime till now.