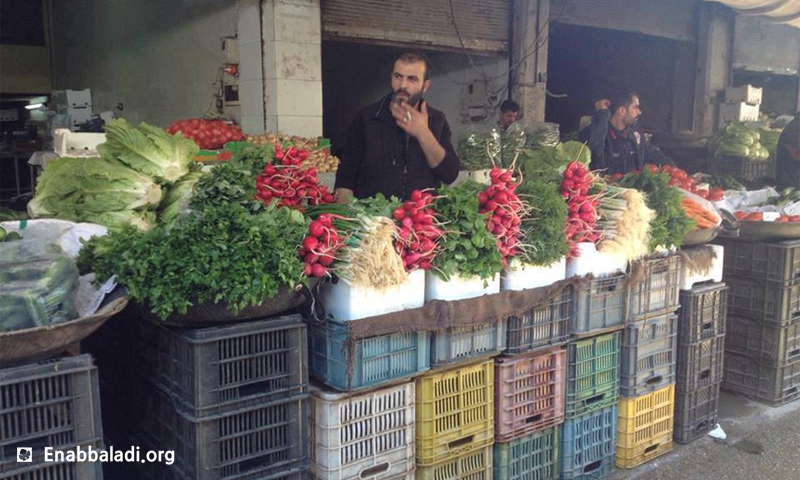 The military checkpoints controlling the entrances of Al Hasaka and its countryside have been preventing any food shipment coming from other provinces to get into the city since ten days, while the area has been experiencing high level of prices and an unprecedented absence of basic materials amid increasing prices.

The price rise is centralized in the cities of Al Qamishli, Derpasieh, Ras AlEin, Mabade and Malkieh; as the price of one kilo of tomatoes reached a 1500 Syrian pound, while prices of potatoes and bananas are 800 and 2500 Syrian pounds consecutively amid a remarkable monopoly of food materials in the public markets.

According to Dahham Al Jaber, a truck driver transporting good from and into Al Hasaka, the regime’s checkpoint by Al Zori roundabout at the entrance of the city of Al Qamishli stopped, last week, 10 trucks loaded with food supplies with no reason. One of the drivers from the city of Aleppo was also arrested with the accusation of dealing with terrorists.

Al Jaber told Enab Baladi that all the trucks are still being under constraint, pointing to the fact that “the food supplies in those trucks will get damaged due to the high temperature especially at this time of the year.”

Ghaleb Rasheed Alo, another driver from the area, that the checkpoint forces a “large” amounts of money for each shipment passing their way, adding that “chief Patrol tends to insult the drivers, along with their companions, and falsely accuse them.”

Rasheed Alo further states that his car is parked inside the sheep market in the city of Al Qamishli, waiting for a regulation that would allow him to enter and leave in order to continue doing his job.

According to media activist Hamoud Alhaitham, the regime is not the only force that is besieging the province, as there are the “masked” national defense militia that follow the regime’s lead in preventing the trucks to enter through the southern entrance of the city of Al Qamishli which they control.

Alhaitham refers to Enab Baladi to the trucks coming from other Syrian areas, especially those loaded with vegetables and fruits, which are prevented from entering the city, pointing that there are around 250 trucks currently parked near the checkpoint awaiting permission to enter the city.

The activist quoted one of the drivers talking about the cost of the goods in those trucks is around 500 million Syrian pounds, asserting that “all of these goods will get damaged if the constraint continues for a long time.”

According to Naser, the forces hinder the trucks’ entrance to the city, adding to Enab Baladi, “there are a huge number of loaded trucks by the checkpoint, inspecting one truck may sometimes spend take a whole day.”

The management cancels customs over goods

The Self-management issued, a few days ago, a regulation that states the cancellation of the customs over the food supplies and vegetables entering the city, due to the absence of some goods in the markets and the price rise.

Khaldon Mohammed, who works at the customs of the Self-management, explains to Enab Baladi; that “the management facilitates the merchants’ business and does not prevent goods in as some opposing media claims”, adding that “our decision to cancel the customs over the incoming goods is an evidence of that, as we care about citizens and we cannot be a reason in his starvation.”

In responce to the allegations in regards to preventing trucks to enter through Al Mabrookah checkpoint, Mohammad points that “it depends on security parties, as there could be suspicious cars, since the province has been previously subjected to terrorist’s acts that cost the lives of hundreds of civilians.”

Citizens suffer and the province management made things worse

All of Al Hasaka residents whom Enab Baladi met with agreed that preventing goods into the province is only a systematic process conducted by the regime and those who control the area in order to displace whatever residents are left in the province, as they describe the situation.

Khaleda Mohammed, one of Al Hasaka’s countryside residents, describes the problem to be “huge”, pointing that “despite our difficult living circumstances and the poverty that has excluded no body, the responsible entities for the area’s management contribute in making the situation even worse, and the first loser is the citizen.”

While Shareef Mohammed, a grocery shop owner, says; “this period is very tragic as the citizen is incapable of purchasing his needs of vegetables”, adding; “the citizen who is helpless, yet is paying a tax for the projects bring established in the area. The regime tries, for years now, to pressure the residents through his armed loyalties in order to get them to migrate outside the country.”

Al Hasaka is experiencing a “suffocating” economic siege, as described by the residents, amid no solutions to the problem of allowing the trucks of basic goods and vegetables into the city and in an atmosphere of interchanged accusations between the parties controlling the area (the Syrian regime and his militia and the Kurdish units) over the responsibility of this siege.