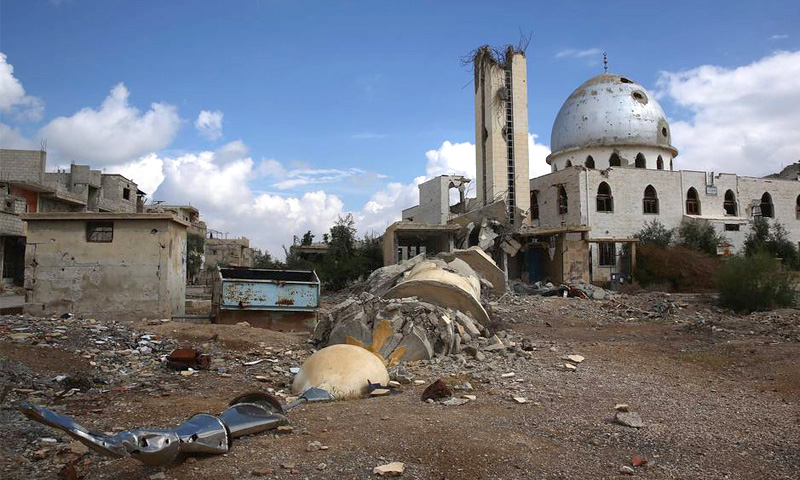 The agreement on the Russian-American truce in Syria did not last long, even though Syrians of both conflicting parties have had their hopes on it. The day the truce started, the word was about seeking real and practical solutions that would end a five-year-journey of killing and deportation to slowly unfold the “flaws” of this agreement; on one hand, the regime and his allies are not eligible to go through the political process, and on the other hand, the United Nations and other influential countries have no intention to stop the “bloodshed”.

On the other hand, some parties considered supportive of the opposition, who are not even included in the agreement, intended to take a military advantage of the truce in order to mobilize its powers and create situations for new confrontations with the regime and his allies in an attempt to lay foundation for its presence in those regions expected to be the possible destinations of any escalation to follow the failure of the truce.

Syrians and those involved in the Russian-American agreement disagreed on the name of the agreement between the two parties late last February; on both media and political levels, the agreement was called “hostile acts cessation”, while the military considered it “a warrior’s repose” and the conflict-afflicted people looked at it as a “temporary truce” protecting them from the evils of this complicated war.

During two weeks of its beginning, the “Cessation of hostilities” actually brought about relative safeness to Syrians in the areas which are no longer under the control of the regime, especially in six main Syrian areas; “Daraa, Damascus, Homs, Hama, Idlib, Aleppo), yet the frequent and escalating violations since day one carried within a serious threat to a sudden collapse of the truce at any minute.

The major contributor in implementing these violations were Assad’s forces and allied militias. These violations were rising in a carefully studied method; the first few days were a preliminary intermittent artillery firing on some suburbs of the capital Damascus, like the eastern and western sides of Al Ghota, to later develop their escalation to raids on areas with Al Nusra Front’s presence (not included in the agreement), especially the areas of the west countryside of Idlib, accompanied by attempts to make progress in Eastern Ghota and Southern Aleppo. Military analysts considered these attempts to “put their fingers on the pulse” of the factions there.

Since the past mid-March, the violations developed to become hard to count and monitor; the northern countryside of Homs was included in the intensified shelling, along with violent battles and confrontations in the south of Aleppo and the northof Lattakia. The opposition factions claim that they have launched their battles there (in the mentioned areas) in response to the repeated violations, whereas others see the battles as a deliberate plan by Al Nusra front and some other “Jihadist” factions to end the “mitigation” and force the Free Army factions to get back to the battlefield.

Currently in April, confrontations and air strikes have expanded as if there was no agreement, as the majority of politicians and military look at the raging confrontations in the north and south of Aleppo as only the beginning of a major battle to be witnessed by the northern province, not to mention that fighting restarted in the country sides of Hama and Homs accompanied by air strikes and repeated shelling to also include the cities of Aleppo and Duma. Even though the involved countries as well as the United Nations recognize the validity of the agreement until today, yet it is practically a dead letter.

An international “hypocrisy” and overlook to the failure of the agreement

The statements of the Regime’s prime government, Wael Al Halki, were not absurd when he acknowledged the preparation of a joint military operation between the regime and Moscow in order to “retrieve Aleppo” to some Russian media a week ago. Yet these statements seemed inconsistent with the official Russian media which quickly denied these “leaks” so that the US won’t use it for their own favor and blame the collapse of the “truce” on the Kremlin.

The Russian news agency “Tass” quoted Al Halki; “we are, together with our Russian partners, preparing for an operation to free Aleppo and fight all the armed and illegal groups, who did not join the agreement of cease-fire or violate it”, the quote which was confirmed by Dmitry Sablin, the member of Supreme Council of the Russian Parliament, saying; “the Russian air force will support the Syrian army’s land attack operation”, before the “Kremlin” denied it all.

The Iranian mobilization for Aleppo battle, recently and publicly assembled in a “commando” of the Iranian army (division 65), in addition to renewed attempts to stretch into the south of the province of Aleppo under the Russian air force cover and the initiation of the ground operation in Handarat area a few days earlier all of which indicate an unmistakable collapse of the “Hostile acts cease” in Syria’s second major city, all of these doings were met with US statements that won’t be even considered condemnation.

John Kerry, Secretary of US state, said there is an “urgent need” for the Syrian regime to stop the violation of cease-fire in Syria. In his telephone conversation with his Russian counterpart, Sergei Lavrov on Friday, April 15, Kerry called for forcing Al Assad to stop the “fighting acts”, saying that his country will work with the opposition in order for them to do the same. These stands coincide with a more distinct statement of the US State Department spokesman when he asserts that “there are serious concerns about the ongoing threats to the cessation of hostile acts in Syria and an urgent need for Al Assad to stop the violations of the ceasefire.”

Moscow’s officials blamed again the opposition groups and accused them of “undermining the truce” as they expressed upon many different occasions during this month. On April 13th, the Russian Defense Ministry accused Al Nusra Front and Sham Freemen Movement of targeting Assad’s troop sites in each of Aleppo, Homs and Lattakia, completely ignoring the military mobilization of its alley north and south of Aleppo, as well as their frequent attempts to break into Al Marjeh in Eastern Ghouta, along with recent air strikes targeting densely populated neighborhoods in the “liberated” areas of Aleppo.

On the other hand, the United Nations deviated from the group, praising the persistency of the “Cessation of hostilities” and its success despite some violations. The UN spokesman, Farhan Haq, said; “the truce, despite a few violations in some Syrian cities, is still steadfast”. Haq’s statements on April 13 coincided with the UN Security Council eulogize of the agreement and facilitation of relief trucks’ entry into the besieged cities and towns.

Matthew Hollingworth, Deputy Regional Director of “World Food” program associated with the UN, expressed hopes in the continuation of the “fragile” agreement of the ceasefire, because “ceasefire allowed people much more than just being able to shop and get help… it actually allowed them hope”, warning that if the ceasefire fails, “we have to look for other methods to reach people, but that would be harder and even harder to negotiate.”

Food has not been allowed into the besieged Daraya, located to the west of Damascus, until this moment, despite the quietness of its fronts and the cease of the shelling and despite the pleas of the children, women and local council of Daraya. The neighborhood of Al Waer in the city of Homs is also witnessing a failure in committing to the agreed-upon truce earlier this year, to suffer again under siege. While the situation looks even gloomier in Al Zabadani, where Hezbollah sweep away agricultural lands and blows up empty houses in order to establish a military base there, at a time where death of starvation continues in the neighboring Madaya.

Deportation of both Arabs and Turkmen in the countryside of northern Lattakia continued even during the “truce”. Thousands of civilians in the besieged (by ISIS) neighborhoods of Der AzZor still wait for the UN’s parachutes, which seemingly lost their way to reach them more than once.

The international community persists in claiming the validity of “cessation of hostile acts” in Syria and brags about the delivery of relief aid to the besieged areas and praises the theories of “peaceful resolution” of Geneva. Meanwhile, Assad prepares to address the members of his parliament in Damascus in an anticipated speech and mobilize along with his allies for a major battle at the gates of Aleppo, all of that is “openly and shamelessly” done.