“Help me heal” back in Aleppo to face drugs 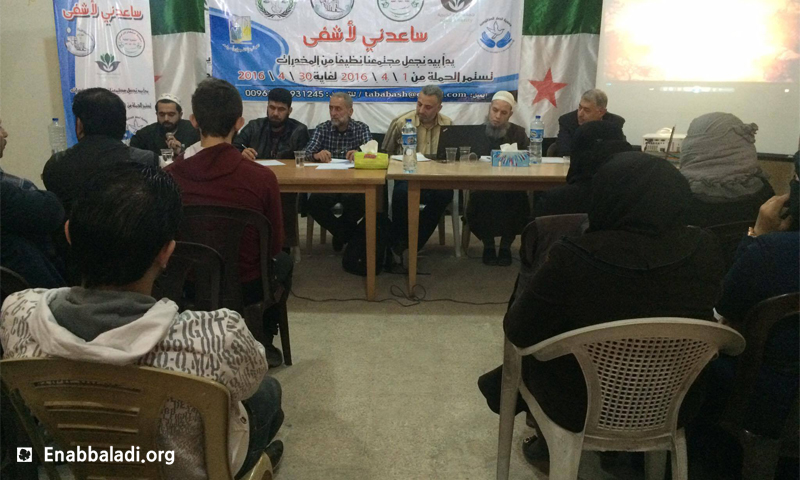 Earlier this April, the campaign “Help me heal” – the second of its kind in Aleppo – was launched under the slogan “hand in hand to build a drug-clean society”. On Monday, 4th, the people responsible of the campaign organized an awareness lecture in order to publicize the danger and harms of drugs.

Mohammad Kahil, also known as “Abu Jaafar”, director of forensic medicine in Aleppo and director of the campaign explained to Enab Baladi that the campaign aims at “preventing the drugs supply to the liberated areas which the regime seeks to drown with in order to kill Man and his humanity.”

According to Kahil, the campaign will end early next May and will include many activities; most importantly are awareness seminars, street and wall posters, leaflets (brochures) to be distributed on the streets in addition to billboards on the main streets showing the harmful effects of drugs.

The campaign targets everyone including military

According to the director of the campaign, it targets all the citizens and school students in the liberated areas, especially the young adults, in addition to the military on fronts.

Joud Akraa’, an activist in the campaign, says the campaign takes place at this time “because the regime tends to vastly promote for drugs in the liberated area”. She adds saying; the campaign will include schools, institutions and associations, “we will continue in order to achieve the outcome that we set off for.”

The events of the campaign commenced with the participation of Liberal Lawyers Board and the Health Directorate of Aleppo, and in cooperation of the “freemen of Palmyra prison”, “Advocacy of the oppressed”, in addition to the Global Development Foundation of “Othman Bn Affan” and the charity of “Joud”.

The campaign’s first awareness seminar was held in the office of Aleppo city council in the presence of all participants in the liberated areas, as a number of Shaaria’ people (people who study the legislation of Islam) such as; Sheikh Abdul Kadir Falaas and Mohammad Hallak lectured talking about the moral and religious aspect of prohibiting drugs and alcohol.

Doctor Abdul Razzaq Darwish, director of blood bank and representative of Health Directorate in the temporary government, lectured on the harmful effects of drugs. He explained to Enab Baladi that “the essential fear at the moment is in addiction due to the medicine-use abuse with no medical supervision and the lack of medical qualifications in the liberated areas.”

Darwish considers what was mentioned above reasons that caused gaps in each of the medical, judicial and security fields, pointing to the directorate’s task with the cooperation of all the campaign’s participants which is “to control this case through raising awareness at all levels”. The directorate operates through the pharmacological supervision board and continues to carry on its role in the treatment phase through its institutions that spread in Aleppo and take care of current addicts, according to Darwish.

Lawyer Abdul Monem Kashkash talked through the seminar about the penalties sentenced to each of the addicted, drug dealer and drug supplier, considering that the board has a significant role as it gathers a huge number of lawyers who try to familiarize people with the legal affairs.

In his interview with Enab Baladi, Kashkash draws the attention to the importance of educating people about the penalties of the drug dealers and the legal status of the drug suppliers, “in an attempt to expose the methods that the regime uses to spread the drugs in the area.”

During November 2014, the city of Aleppo and its countryside witnessed a campaign against drugs under the same name. The Forensic Medical division established on its own a small rehab center to treat addicts, but the work was stopped as the project did not get enough support.