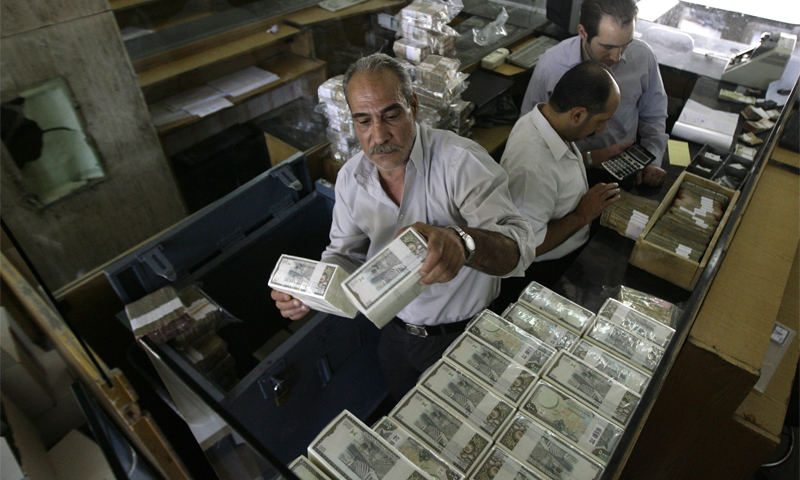 It seems that the information which was confirmed by the World Bank about the sharp decline in cash reserves at the Central Bank of Syria, on its title “Economic Observatory for the Middle East and North Africa – Spring 2016”, quickly reflected on the dollar on the black market, where the exchange rate declined to an unprecedented levels and reached nearly 530 pounds to the dollar.

But the striking news is that it’s the first time for an international official body to announce the remaining reserves in the central treasury, after five years of conflict, during which the central struggled to keep the value of the lira at “reasonable” levels against the dollar, but “failed” to do so according to the testimony of experts and economic analysts, having squandered its reserve and having a treasury of only $ 700 million, down from 17 billion pounds in 2011.

Syrian Central denied this information, and confirmed the existence of a rupture between him and the World Bank, which is why he did not provide them with any information, positive or negative, since five years ago. A prominent businessman in Damascus compared the World Bank Information as similar to the charge made against Iraq’s possession of nuclear weapons, which were used as a pretext for the invasion in 2003.

During the past years, Western sanctions and the decline in investments in Syria have contributed to slow financial flows into the regime government, coinciding with the decline in revenues from exports, customs, fees and taxes, all of which placed a large pressure on both expense and investment size of the government budget, which led the way to the declining purchasing power of the lira due to the high demand on foreign currency.

In order to face this, the central bank pursued a policy of “positive intervention” by pumping amounts of foreign exchange in the market to meet the demand for the currency in the parallel market and to restrain speculation on the Syrian pound, in parallel with the central governor Adib Mayaleh and his team’s statements that belie the high demand for foreign currency, accusing other countries and  the media of fomenting the market situation, presuming  that the exchange rate of the lira is delusional and that it would return to normal levels, but what happened is that the pound continued to decline and the reserves of foreign exchange continued bleeding until the reserve “dried out.”

Economist Jihad Yazigi, says commenting on the information reported by the World Bank for the depleting reserves of foreign exchange, “This clearly means that the reserves are dried up.”

The World Bank considered that “the collapse of exports and reserves have led to a decline in the value of the national currency.” And, “The gross domestic product (GDP) in Syria declined by 19% in 2015 and is supposed to see a new decline by 8% in 2016.”

Decline in the lira threatens reconstruction

According to World Bank figures, the government deficit in the general budget has risen dramatically, from 12% of the total GDP during the period between 2011 and 2014 to 20% in 2015, and is assumed to go up to 18% in the current year.

Adding to the pressure on the reserves is the decline in imports from oil, which is out of the regime’s control in favor to “ISIS”, and now Syria is facing falling in oil revenues from  4.7 billion US dollars in 2011 (4.1 billion euros) to 0.14 billion dollars (0.12 billion euros) in the 2015.

The United Nations estimates that 158 billion euros must be invested to bring back the gross domestic product (GDP) to its level prior to the conflict, while the Syrian Center for Policy Research, estimated the cost of the destruction in infrastructure to be about 75 billion dollars (66 billion euros), and that it’s expected that the cash reserve in Syria has dropped to two billion dollars just in 2013.
The World Bank president Jim Yong Kim placed a vision of the costs of the reconstruction of the areas destroyed in Syria, estimated by 180 billion dollars, and considered that lower oil prices will make it  difficult to rebuild the country. While the head of the Syrian regime Bashar al-Assad, has presented during one of his television interviews a close number to the international bank number for reconstruction and was set at about 200 billion US dollars.

An economist expert from Damascus confirms to Enab Baladi, that the information cited by the World Bank about the collapse of the reserves in the Central Bank of Syria is “correct”, but it will not affect the currently exchange rate, but what will greatly affect the price is the exploit of this information by the operators in order to put pressure on the lira for profit after the deterioration of the reserve.

The expert suggests that the Syrian pound will continue to decline, and it will be the dollar on the black market in control of the exchange rate for the foreseeable future.

In response for the questions regarding the financial resources and foreign exchange, which will be employed, and injected into the market to set the exchange rate and to meet the needs of traders and importers while running out of the current reserve, the economic analyst stressed that the central Bank will mainly resort to the financial transfers to the citizens in hard currency, and international support for the Damascus government from allies.

The expert pointed out that the first affected by the recent deterioration of the lira, and the depletion of foreign reserves, is the citizen, as citizens will bear the consequences of high cost of living and high prices.

After the deterioration of the reserve to unprecedented levels, the remaining Syrian stockpiles of gold are unchanged, which raises the question about the possibility of the Governor of the Central Bank of Syria, Adib Mayala, resorting to selling this stock or disposing it for foreign exchange in light of the dollar and hard currency depletion, as the World gold Council data revealed that the possession of the Central Bank of Syria of gold is estimated at 25.8 tons, and recorded Syria as the 56th in the official acquisition of gold out of 100 countries included in the classification, and thus the central Kept this acquisition during the last 14 years without change.

In turn, economic expert, Ruslan Khaddour, confirmed in a press statement, that “Syria’s reserves of gold is considered a safety valve for the Syrian pound and even to the economy, especially with the World Gold Council data showing the stability of the possession of the Central Bank of Syria of gold, it proves that we don’t need to sell gold in order to support the lira, and this is a positive indication to the economic level.”  But after running out of foreign reserves the door has become open to the use of gold reserves, unless the lifeline from Tehran and Moscow continues to maintain a constant currency balance and to support the survival of the regime standing.