Elections are at hand… with indifferent citizens 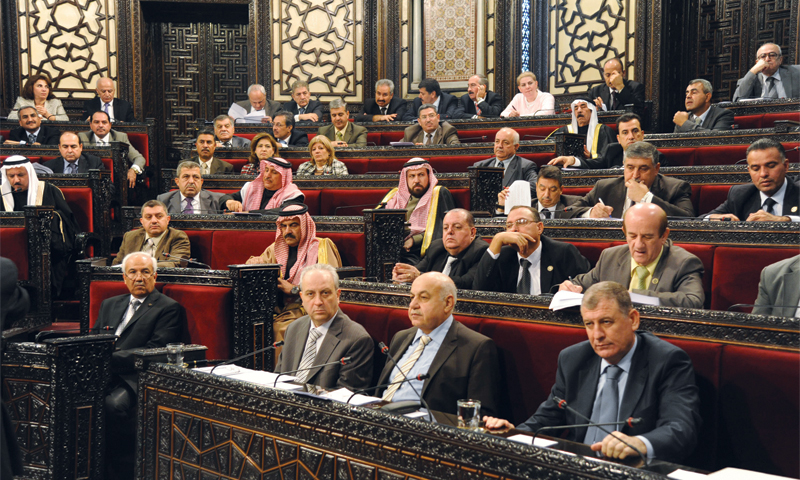 Ten days are left for the Syrian Parliament elections, which the Syrian regime called for and which is taking place on the 13th of this April.

The elections which the regime uses to try to convince the world that he (Al Assad) has Syria under control and which is described by many as a “Joke”, were distantly decided of the Geneva talks, especially that it was only announced for a few hours after the Russians and Americans blessed the cease-fire between the Regime and the opposition.

The Supreme Committee announced that the number of candidates for the Parliament in all provinces amounted 11341, including 1805 in Damascus and 2485 in Aleppo and its suburbs, whereas the number of election centers was 1468.

The military in Syria were allowed to participate in the Parliamentary elections for the first time after amending the current election law, which also included changing election centers to different areas if the current center’s area is witnessing military operations. Therefore, the regime employed 450 centers for residents of militarized provinces, (namely: Idlib, Al Raqqa and Aleppo) in the areas that are under his control, mostly; Damascus, Tartus and Lattakia. The regime also announced that it is willing to employ election centers in Palmyra, which is practically deserted, after retrieving it from “ISIS” on the 28th of last March.

As soon as the regime announced the beginning of the nominations, different and varied campaigns started in an attempt to win elections. Some candidates used social networking tools to deliver their election programs to people, others spent millions of Syrian pounds over advertising campaigns, in a way you would think that life is normal in the country and we have not been suffering of war for five years now.

Al-Watan newspaper, affiliated by the Syrian regime, mentioned that in the 30th of last March, some independent candidates spent tens of millions Syrian pounds over their advertising campaigns and devoted thousands of delegates to be at the election centers in order to get more votes.

However, the most distinct electoral campaigns were in Aleppo. The candidate, Hasan Shaaban Beri, one of the Shabeeha (people who intimidate by force and violence in service of Assad Regime), conducted an intimidation campaign in order to get people to elect him. Some regime supporter social media pages posted that Beri’s Shabeeha attacked with knives a supermarket owner in Koliet Al Handasa (an area in Aleppo) on the 27th of March because the owner refused to hang the candidate’s photo on his shop’s window.

According to the social network page, the attackers smashed the shop and robbed it after they stabbed the shop owner with knives and swords in his face and body. As soon as they left the shop, they started threatening the residents of that area, saying loudly “those who won’t elect our leader Shaaban, would have to face our knives.”

This incident was met with a wave of rage by the residents, who demanded that the Security committee in Aleppo and the Judicial Committee for Elections to exclude him of the elections and investigate him and his gang.

The comments on this news varied as someone wrote; “since he is a (knives’) gang person, it is certain that the regime is content with him, in other words, he is to win the elections, so what is it with these Shabeeha acts.” Another one wrote “it feels like we are living in a jungle…the strong eats the weak”, comparing the elections to a “sitcom”.

The presence of women under the age of 40 marked a new phenomenon in the elections and its campaigns. Some women were not even 30 years old. They all competed to show their beauty in their electoral photos and the majority of them looked “glamorously beautiful”.

Actors – supportive of the Assad regime – joined the candidates’ lists, including actor Zuhair Ramadan representing Lattakia, Aref Al Taweel representing Damascus countryside and Tawfik Iskandar representing Homs, who significantly guaranteed their places within the parliament as a result of including their names in the “National Unity” list prepared by the ruling Baath Party and other parties that go under the umbrella of “National Progressive Front”. This list has the highest chance in winning the parliament seats since it is supported by the regime. The Film Director, Najdat Anzor, who is known for his supportive stand to the Assad regime, also stood as a candidate for the independent category in the elections in Aleppo.

Followers of the electoral lists noticed the announcement of the “National Unity List” instead of “National Progressive Front List”, which used to be issued in the former elections and had guaranteed winning seats for all of its candidates.

Permission for Syrians to Come Back Home to Vote

Hisham Al Shaar, President of the Supreme Judicial Committee for Elections, told Al-Watan (the Regime’s affiliated newspaper) on March 8th that the “Syrian State” will not deny anyone outside Syria to come back for the sake of participating in the parliament elections. The doors are open to all expatriates willing to come back to Syria in order to participate in the elections, stressing – in his own words- that the constitution ensures “absolute freedom” in voting.

Al Shaar claimed the Judicial Committee monitors the elections with absolute integrity, whether they were Parliamentary or Presidential elections. Therefore, there is no need for anyone else to monitor the elections.

Despite the efforts and the millions of Syrian pounds spent on electoral campaigns, the distribution of sweets to people in the streets and chanting slogans which Syrians are long-time familiar with, such as; “Building the Homeland”, “Fighting Corruption” and “Hand in Hand to Face Terrorism”, yet, following up the Syrian people reactions, those who are still inside Syria, over the social networking websites reflects their indifference to the elections. Their main concern is providing their needs and daily supplies, especially after the dramatic rise in prices due to value drop of the Syrian pound.