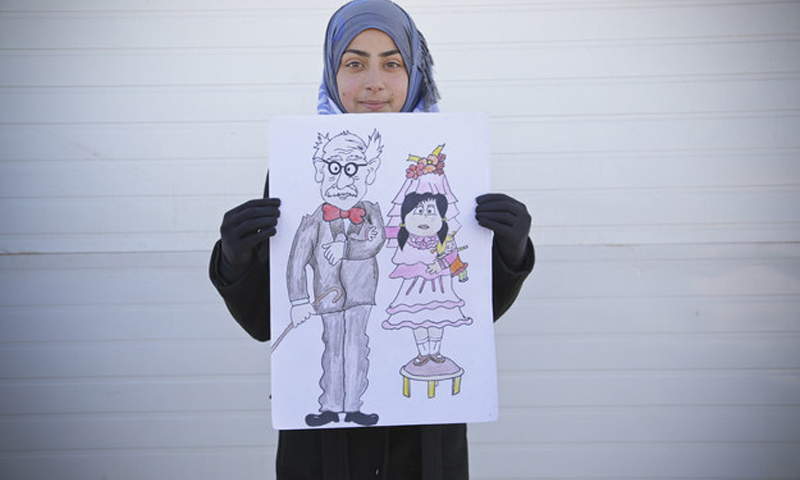 Um Mossab, a Syrian refugee in Lebanon, says, upon asking about her opinion regarding early marriage, “I do not understand how these people at those organizations think! What should I do with 4 daughters sitting around in a tent all day long; with no education nor work? Of course marriage is a better choice for them than this life”. She demands that involved organizations would “provide alternatives for these girls, if they really cared about them”, adding; “we don’t need anyone to dictate us with what works best for our daughters.”

The International and Human rights organizations warn of the phenomenon of early marriage and stresses the importance of limiting it, especially among Syrian refugees due to the ongoing war and the exploitation of women. Nevertheless, do these organizations consider the reality behind this phenomenon and its spread? Do they search into its reasons, the culture of its victims and their identities in order to come up with effective methods to put it to an end?

Hanan, a school teacher teaching Syrian girls in the Lebanese Bekka, says; “when destruction and bloodshed increase, so does love, and as it has been said before: in war times, both death and love increase”, and she adds; “when the society, with all of its traditions and customs, does not accommodate the human’s emotional and sensational needs, women would be the most unjustly treated at war times, as men are capable of fulfilling their sensational and sexual needs, whereas women are denied such a thing considering this act as something she was not brought up to do.”

Girls are meeting men at a young age

According to Hanan, the growth in using social media facilitated love relationships for girls. Girls nowadays do not worry about meeting a young man on the streets and do not fear being seen by relatives. Hanan further clarifies “that in the conservative societies of Syria, girls would be 17 years old and they would have never met a young man in their lives. Nowadays, a 13-year-old girl is capable of meeting too many young men over Facebook and What’s up and falls in love many times.”

Hanan criticizes the Civil Society organizations’ approach to the issue of early marriage, as they always focus on the matter of early marriage without considering what suffering and tragedy lie behind it. She says “are they really short-sighted and incapable of looking at this serious times these inexperienced girls are living? Any young man can easily deceive them. What I consider important is qualifying them to become emotionally independent and have more self-confidence rather than explaining the dangers of early marriage on their health especially that they have seen their mothers, who married at an early age, in good health.”

Rabea Al Kaderi, responsible for women psychological support at “Basamat” center in Lebanon which is involved in empowering women, says; “it is impossible to directly address the girls and their parents on the subject of the damages of early marriage for many reasons: most notably is the culture of early marriage being an old one spread in Syria even before the war, the fact that there is no alternative like education or working for these girls and lastly is the girls’ need for affection and love at this period of time.”

Manal Zeid, an employee at the organization of “Women now in order to develop” and a member of the team which organized a lecture regarding the damages of early marriage at “Malala” school in Bekkaa, tells how some mothers attacked the activists who organized the lecture. According to her, these women were very upset and they forbade their daughters from attending any lecture of this kind.

Noor is the nickname of an engaged 16-year-old girl who is completing her education at the Syrian “Al Alam Al Sageer” (The small world) school in Bekka. She says “I will complete my education and I am not dropping school even if I am engaged. I am getting married in a year.” This lively girl adds saying “my family did not force me into this engagement, in fact I chose it willingly as I was so in need for the feeling of affection and security.”

Noor lives alone with her mother after the “martyrdom” of her father in Syria. She refuses to give her true name avoiding any embarrassment and she asserts “I got engaged to the young man that my family and I chose. I believe that a Syrian 16-year-old girl is nowadays mature enough because of the war that has forced us to grow older than our true age. All of my friends at school wish to get engaged or married.”

Hussam, a Syrian young man who lives in the area of Bekka, considers frankly and openly that “the majority of young men consider getting engaged to girls between 15 and 16 years of age, as they tend to have less demands as well as less experience meeting so many people through the social media” as he expresses it.

He adds saying “they will look at this way of thinking as Eastern, well, of course because I come from the Eastern countries and I do not see anything wrong with this way of thinking and if the world really cares about us, then they should show some respect towards our culture and traditions.”

A 13-year-old girl who is in fact a “widow”, despite her young age attends the same school. Her mother has brought her to school amid so much discreet and “top secrecy” demands over her story. The mother says “I gave my 12-year-old daughter in marriage for a young man who is a member of the free army in our area, but he was a martyr after one year and my daughter became a widow.”

The mother then ran away to Lebanon with her daughter, who was in a collapsed shape at this stage. The mother adds “I enrolled her at the school and told her story to the administration with discreet requests. My daughter is now living her childhood again and is happy to go to school.”

Abdul Hadi, the school principle, says that the girl is too young and it is hard to believe that she is a widow, reassuring that he takes her condition into account and that he is very happy to see her running and playing with her friends and carrying her backpack on her back.”

The mother tells Enab Baladi that “I really regret this” but retracts by saying; “if my daughter was not currently at school, maybe the circumstances and my fear for her would have pushed me to give her in marriage again.”

The counselor Rabea Al Kaderi says “it is unintelligent of these organizations to ignore the culture of the Syrian people and its religious identity while they are preparing for any program to be fulfilled,” considering that “it is not normal to prioritize the work on reducing the phenomenon of early marriage with all of these tragedies that we are experiencing.”

The counselor asserts her refusing attitude of the phenomenon, but says “I encounter some painful cases and stories where I feel that I would react just like the mothers, if I were in their shoes.”

Malak, a teacher at “Al Alam Al Sageer” school, agrees with Al Kaderi’s opinion adding; “I believe it is better for religious scholars to urge that parents of girls to follow secure measures in order to ensure her rights, especially since the girls in the majority of these cases are willing to get married and are not forced by their parents.”

“I know many Syrian girls, whom I am very close to, most of them wish to experience love and get married. When parents are sensing this inclination in their girls, and with all means of access to all sorts of media, the parents really wish to give their daughters in marriage fearing them wrong doings and following dangerous path, because if that happens, the girls’ lives would be corrupted.”

It is hard to get a rough statistics of the number of the girls who married at an early age in Lebanon for many reasons, most notably is registering the marriage at Al Sheikh’s office and the absence of an official registration at the governmental institutions. At a school like “Al Alam Al Sageer”, there are 15 engaged girls out of 120 underage girls.

The participants of the poll conducted by Enab Baladi demand an inspection into the responsible reasons behind this phenomenon and its expansion, while most refugee parents do not see it as a bad issue and ignore the consequences of this phenomenon on the family compared to the circumstances they are currently living.