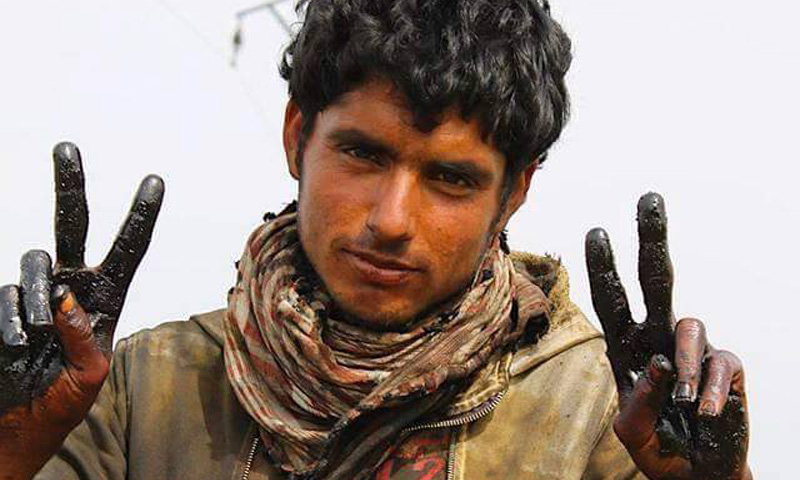 Clinics and health centers located in the Al Haska countryside have recently reported an influx of conditions caused by the smoke from oil refineries and toxic gas. Doctors warn that the rising temperatures will increase the negative effects.

Dr. Joubi Morad, a pulmonologist from Al Qamshli City, told Enab Baladi that during March she had examined more than 55 conditions that she described as “strange,” pointing to the fact that examining these conditions “have revealed a bacterium in the lungs accompanied at times with a continuous bloody cough.”

Morad confirmed that the initial symptoms indicate the residents had injuries in areas where oil refinery process is done in a primitive way. “This proves that the bacterium is caused by the saturated toxic smoke,” she explained.

Fleshy Mass growing underneath the skin of the infected

The symptoms exceed the respiratory systems. Dr. Badri Ali, a dermatologist, pointed that the workers at those oil refineries visit the clinic sporadically, and their examinations have shown cases of contact dermatitis, a rash, as well as the appearance of red spots on the skin on their hands and the feet.

In his interview with Enab Baladi, Ali says that recently there have been “more deadly” cases, like fleshy mass growing under the skin. He explained that there were 23 cases in his clinic last February, and they all showed a growth under the skin. According to Ali, doctors are compelled to refer the sick to Damascus due to the absence of specialized labs in the Al Haska region.

Kids are injured and the number of epidemic diseases rise

Children, too, have suffered and were injured from the damaging effects of oil refineries in the area. A pediatric specialist, Dr. Waleed Mohammad, explained that the smoke from the refinery process consists of carbon dioxide gas and lead which affect the fetus’ development.

Mohammad told Enab Baladi that recently he had noticed an increase in fetal deformity very clearly and differently from what he had seen in past years.

According to Liann Souliman, a receptionist at the National Hospital in Qamishli, during the first three months of this year, they registered 15 cases of hepatitis.

Souliman says that all of these cases arrived from the adjacent areas to the Iraqi borders, which contain the largest amounts of primitive oil refineries. These numbers are likely to increase in the future “as this disease rapidly spreads.”

The damaging effects of these oil refineries affects not only people in the countrysides but to animals and plants as well. Recently the area witnessed an increase in the numbers of dead animals, while the crops are getting colored with black pigments.

In his interview with Enab Baladi, a veterinarian, Adnan Yunis said that the numbers of dead animals, especially various birds and cows, have significantly increased. In addition to the direct effect on livestock, the smoke from oil refineries destroyed the plants that the animals feed on, “which contributed to mass deaths.”

An agricultural engineer, Abdullah Al Nayef, talked about the lack of agriculture in different parts of the countryside of Al Hasaka including; Souliman Sari, Rajem Ayaar, Taweel and the subsidiary villages. He pointed to the fact that global warming in the area rose significantly due to the black smoke. He noted, “The region’s production of wheat and barley was good before the revolution, but now these lands have become barren.”

Awad Aldaham, the owner of an oil refinery in the countryside of Al Hasaka by the Syrian-Iraqi borders said to Enab Baladi that more than 1200 primitive oil refineries spread to different areas like Yarobie, Tel Elo, Karhook and Ali Agha. He explained that the demand for fuel and crude oil has grown.

The oil barrels are sold in US dollars and Syrian pounds. According to Aldaham, the managing supervisors of the oil field in Alrmelan City are the ones who cash the money. They tend to sell it to primitive burner owners, as they cannot pipe it to the refineries run by the Syrian regime.

No solutions seem to be in sight to control the distribution of oil. Doctors in the region have rung a warning bell. They see that diseases are more likely to spread amid the absence of inspections from the companies that control the primitive oil refineries.