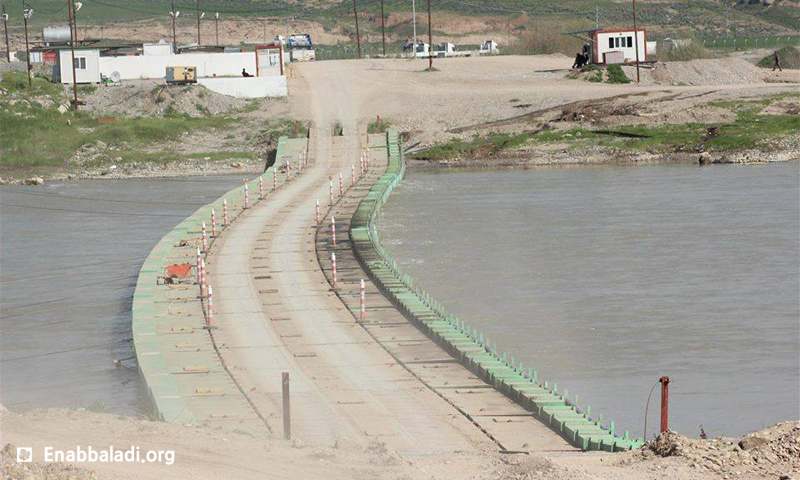 Zahed Mahmoud, a recent employee at the administration of the crossing, explains to Enab Baladi that the bridge over Tigris river, which connects Iraqi Kurdistan with Syria, “has been a crossing for hundreds of food and relief supplies a few months ago.”

According to Mahmoud, the crossing was not only functioning as a passage for food supplies’ trucks, but it was also a passage to all spare parts machinery and construction materials’ entry, a place for sheep, cattle and crops of all kinds export from the Syrian island.

Zakho tells Enab Baladi that closing the crossing was a result of the irresponsible interaction among the supervisors on the Syrian side and their interference in the region’s affairs, refuting the reasons of closing circulated by some media, which attribute it “to problems in dividing the border’s customs.”

Closing the crossing had negative consequences on the region, the thing that put the residents in a critical situation as it contributes in tightening things for them, especially with the current closing of all entries to the province.

Shehab Abulnour, a truck driver from Aleppo city who used to transport goods between Syria and Iraqi Kurdistan, says to Enab Baladi the crossing witnessed the passage of a 534 trucks a day, adding; “we were paying customs for each cargo to those responsible for the administration of the crossing.”

On the other hand, Shafiq Walat, a food trader from the city of Al Qamishli, draws the attention during his interview with Enab Baladi to the rise in the prices of vegetables due to the closing of the crossing. He points out that the price of one kilogram of tomatoes reached 800 Syrian pounds, after it was only 80 Syrian pounds. The price of one bag of sugar (50 kilograms) used to be 8800 Syrian pounds and has now exceeded 20 thousand pound, “the citizen alone pays the price for this increase.”

Closing the crossing did not only affect traders, but it also had a great impact on the farmers and animal fanciers in the city of Al Hasaka, as they used to export the crops and livestock to the Iraqi Kurdistan region.

Adel Morad, a trader of crops from Derbasiah town in Al Hasaka, explains to Enab Baladi that he had purchased large amounts of coriander and cumin and stored them in order to export them to the region, however, continuing to close the crossing “caused a serious problem as storing these products for a long time results in damaging it.”

Shlash Mohi Eldeen works in animal husbandry in the town. He declares that closing the crossing has completely paralyzed his work, after he used to export livestock to the Gulf countries and Turkey through that region with good prices.

Mohi Eldin says “the residents of the region make a living depending on agriculture and animal husbandry. Recently you cannot find anyone to buy the animals we raise, which is costing us feed and medication”, adding; “our conditions have dramatically deteriorated.”

Since the beginning of the revolution, thousands of Syrians took refuge in the Iraqi Kurdistan region, most of them reside within six camps between Dahouk and Erbil. The administration of the crossing allowed residents to visit their relatives in the region, however, closing it caused a passing crisis.

A person who wants to visit his relatives has to smuggle himself through the Iraqi borders taking the risks of the road and its burdens.

Suliman Rustom, a young man from Al Hasaka, says to Enab Baladi that closing the crossing gave control to smugglers over migrants, pointing out that he himself is under call for mandatory service at the self-management, the thing that forced him to head towards the region to work.

Since the crossing is currently closed, Rustom has made a deal with an Iraqi smuggler and paid him 1000 USD in order to get him to the region. He explains “we walked for 6 hours in very bad weather conditions and hardly crossed the River of Tirgis.”

According to the regime’s Directorate of Supply, the poor management of the region, the spread of corruption and the absence of supply controls were the supporting reasons behind the drop off in the living conditions in Al Hasaka city and its suburbs.

Ghalia Othman, an employee in the Directorate, expressed that before 2011, she seized “hundreds of irregularities against traders who manipulated prices of goods”, but since large areas slipped away of the regime’s grip “the situation got aggravated.”

Othman justified the deterioration of the situation to “a complete absence of supply controls, the monopoly of goods according to what a trader sees and the exploitation of citizens.”

“Siklama” crossing was established in the second year of the Syrian revolution. The administration of the crossing built an iron bridge over the Tigris River in order to facilitate the passage of goods. Thousands of emigrant Syrians crossed the bridge to the region seeking work opportunities or asylum. The residents of the region warns of worse conditions in case the closing of the crossing continues.