Have the civilian activists lost their places in the liberated areas? 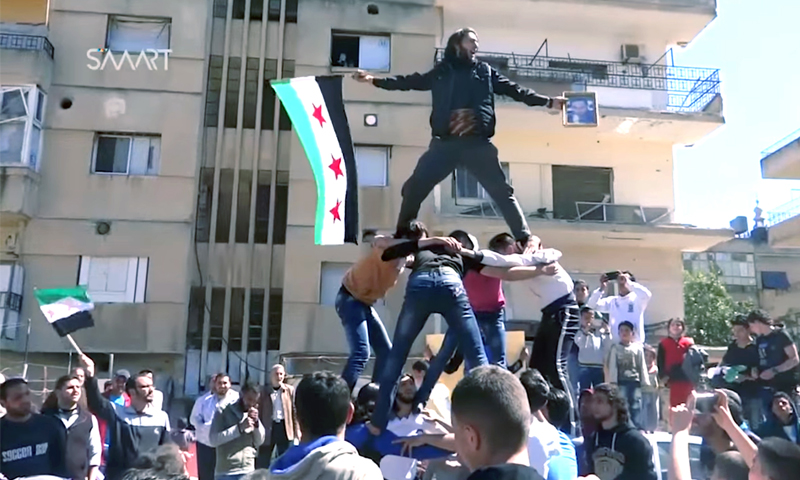 Thaer was about to graduate from the faculty of Psychological counseling, when he went out with thousands of young men of his city, rebelling in the first demonstrations calling for freedom and dignity, fleeing from one neighborhood to the other, through one evening to the other, before he found himself forced to leave Homs and all that’s in it due to the expiry of his military service postponing limit with no possibility to renew it.

When Thaer got involved in the revolutionary act, he was betting on the regime’s rapid fall. He did not think that the regime would withstand for a period of time that extends beyond the expiry of his (Thaer’s) military service postponement, however, since the regime survived, his only choice of “freedom” was to flee to the liberated areas, leaving behind the details of neighborhoods that he has memorized and which in return memorized the voice of his cheering cries. Thaer bid Homs goodbye leaving his family and home behind to head to the countryside of Idlib.

The countryside of Idlib was involved in massive demonstrations since the first weeks of the revolution. Soon, large parts of Idlib were liberated making it a place to receive huge numbers of displaced people and activists from different Syrian cities, which stimulated the need for establishing committees to facilitate people’s affairs in light of the absence of the role of the State on both administrative and security levels.

Thaer had no intention in joining the free army forces or getting involved in any military act, as he preferred not to get in contact with the militants in the liberated area believing that the revolution and its first spirit was peaceful.

At the beginning of his stay, Thaer felt the meaning of free life away from the oppression of Assad and his authority. With such a quiet nature and the company of ordinary people, Thaer started working in the education sector along with a number of other teachers, contributing in teaching the kids who have dropped out of school using the official governmental curricula with the exception of national education subject.

The statistics, published by the educational report of education in the Arab countries, states that more than 20% of the schools in Syria have been partially or completely damaged, not to mention that 1500 schools have become refugee shelters, in addition to the fact that 4 million kids have dropped out of school, and as for teachers, 55% teachers are registered in the education sector in Idlib and only 60% kids attend schools.

He continued to live in this heaven of freedom until there was interference in his personal life, in addition to new modified educational curricula financed through abroad parties, which, he, along with fellow activists, considered an attempt to ideologize the kids and buy off their parents’ loyalty. Thaer says; “I believe the humble means that I use to teach the kids through won’t harm them in the way that education directed to serve the special aims of a funder would do. It is something that I see around every day and I refuse to become a means to serve this aim.”

Thaer’s opposing attitude towards the new trend and his, along with his friends’, persistence to carry on their humble and independent project contributed in putting them on the spotlight. There were questions in regards to his religious and faction affiliations, along with inspection over the contents of his classes concerning ideas and discussions that go around in class, not to mention many other acts of harassment.

Questions and doubts were not only going around Thaer, rather these questions were in facet directed to him “in an interrogating” kind of way, as he says; “even though I only teach Arabic and English, yet I was accused of promoting for secular ideas among the students, by which they mean the revolutionary and patriotic thoughts we discuss every now and then in class.”

These doubts have soon become threats and some Islamic factions started restraining and interrogating him repeatedly, despite everything he has offered for kids and civilians, until one time they blindfolded and kidnapped him for a few hours, to drop him close to where he lives for the sake of terrorizing and “scaring” him away, as he put it.

After he has suffered temporary kidnapping, Thaer realized the danger of his stay and vigorous ideas of leaving crept again to him as a sole surviving way to maintain the freedom of his civil work and thoughts, till he made arrangements with a smuggler to secure him into Turkey.

In this way, Thaer’s journey and activity in the countryside of Idlib came to an end after more than two years, to yet choose being safe and searching for another place that would allow him the freedom of activity and thought, which was what he rebelled for in the first place.