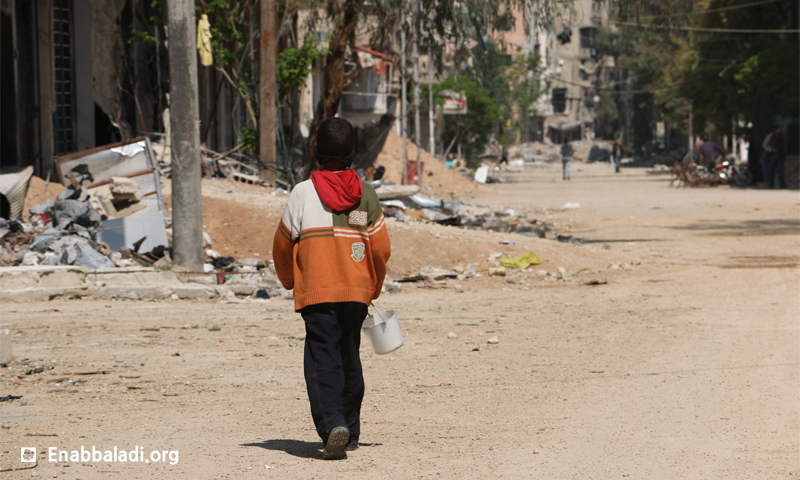 Starving to death and the cruel experience that the city of Madaya (located in the countryside of Damascus) witnessed is a nightmare haunting people of Daraya today, as it begins the fourth year of a siege imposed by the battle against Al Assad forces, as the latter finally managed to separate the city from its neighboring city of Muadamiyat al-Sham, the sole artery for the city.

A 40-year-old farmer from the city, Ziad Abu Mohammad, says that; “the regime could not control the city through his burn the land policy, in order to finish what he started since day one, which is preventing the basic living supplies to get into the city, so that those who were not killed by explosive barrels, would starve to death.”

According to the farmer, the regime could not care less about the civilians while shelling the city with barrels. In fact, he meant to target the civilians’ communities in order to put the FSA under pressure. He adds saying; “why would he allow aid to get to the people he has been meaning to kill”, pointing out to “the failure of the international community to deliver a loaf of bread for a hungry child.”

The majority of the people of Daraya and its institutions tend to work in agriculture within spaces that suit their financial abilities, as civilians are only able to plant small spaces of land or the gardens of their houses.

“Soup” is a main course… Planting is not enough

“Soup” has become the main course for the residents, who tend to add a lot of spices with very little rice in order to give it some color and taste to help them feel full.

Abu Hasan Al Sous (of 50 years old) tries to plant whatever is left in his destroyed garden. He says; “I am a drowning man clutching at a straw” to describe the small space that he plants. He adds: “I know that what I have planted is not sufficient to feed my wife and two kids for more than two days, but there is nothing more I can do.”

It has become usual to have one meal a day, but it is totally unacceptable for this one meal to be insufficient, as Abu Hasan puts it, adding “the streets of the city came back to life with the cease-fire, but it has revealed the pain people were experiencing alone in the darkness of cellars. I thought my case was the worst as I ran out of food supplies, but it turned out that all of my neighbors and people I know were living worse conditions.”

The Relief Office of the local council in the city is incapable of answering the residents’ food demands, according to Haytham Abu Mostafa who tells Enab Baladi “we provide emergency meals for those in most need, but these meals suffice for only a few days due to the siege suffocating the city which has continued for a very long time and has drained all of the city’s resources.”

According to Haytham, “we have organized the available resources in order to distribute them according to a well-studied plan that would suit the difficulty of the siege”. Haytham emphasizes “we lack the necessary resources to fill the civilians’ need, as we are capable of meeting only a part of their daily needs.”

The agricultural work is considered, by the director of the office, the most important one that helps a little in facing the siege. He points out that the work has stopped during the military escalation over the city, as many parts of the crops were damaged and many other fields were under shelling or sniping. The office resumed their work, with the beginning of ceasefire, through the reclamation of new lands and planting them so that it would support the residents in case the siege continued.

The director of the office uses the expression; “deficiency in all kinds of resources” to describe the situation in the city, as it has become very difficult to get seeds, fertilizers and pesticides, in addition to the lack of fuel needed to irrigate agricultural lands, not to mention the damage of the water pumps due to the shelling.

The basic diesel fuel used to run generators and water pumps is considered used up, the thing that urged the office and the residents to use an alternative called “the mix”, which is basically melted and refined plastic that would replace diesel fuel, yet it is of a bad quality and causes malfunctions in the engines.

Abu Mostafa concluded saying that the residents of the city live “a very bad reality”. He warns of a “Humanitarian catastrophe if the siege continues and the medical and relief aids were not urgently delivered.”

The kitchen of the city shuts down

The independent “Al Ataa’ Al kheiri project” (Charitable Giving Project) left a very good mark and impression for the residents of the city throughout a year and a half, but it has stopped early last March.

Mahmoud Abu Mojahed, one of the project’s officials, says; “the work began in the middle of last October 2014 with the opening of a kitchen that offers daily meals to all the city residents, but with the closing of Al Moadamieh crossing, we had to reduce the cooking to be limited to three days due to the lack of food supplies until the regime separated between Daraya and Al Moadamieh, then we were depending on  the stored resources until we ran out early last March and we were forced to stop.”

The officials of the project have planted some crops, established a cow farm and are now distributing milk to the families at a rate of one liter per family on a weekly basis. Abu Mojahed confirms that “the suffering is alarmingly increasing and the hunger is creeping into the bodies of the residents.”

“Human Rights Watch” accused the Syrian regime of obstructing the delivery of the aids to the residents of both sieged cities of Al Ghouta, despite the agreement between the United Nations and the regime on aids’ delivery.

Human Rights Watch: the Regime obstructs the delivery of the aids

In its report, on the 4th of April, the International Organization of Human Rights Watch confirmed that the Syrian regime is obstructing the delivery of the aids to both sieged cities of Al Ghouta, despite the agreement between the United Nations and the regime on aids’ delivery.

Nadeem Hoari, Deputy Executive Director of the Middle East division at Human Rights Watch, says that the regime uses the aids as a pressure, pointing out that recently the entry of aids has improved, yet it is not enough.

Mohammad Shehada, a member of the local council of the city of Daraya, says -in his interview with the organization- there is only one field hospital that serves the whole city, yet many surgical procedures cannot be operated there due to the lack of equipment”. He points out that the absence of medication forced them to use expired ones.

There are about 8300 civilians currently living in Daraya, 2150 of them are under the age of 14 and 430 are at the infancy age. The city has been home to some 250 thousand people, who left their home as a result of the military operations and the siege that began in October 2012.