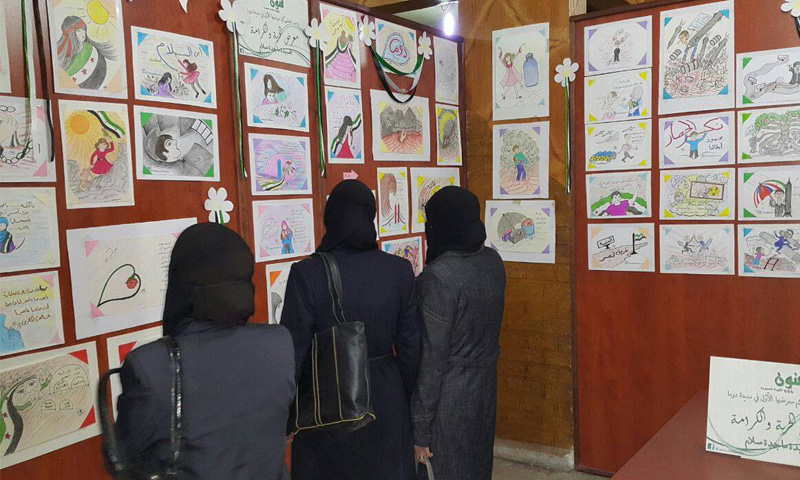 “I draw ever since I was little and I used to be at the top of my class”, said the 50-year-old grandmother, Majda Salam, who comes from Duma city, expressing her joy to be part of the “Syrian Revolution Arts” exhibition, which ended on Wednesday, March 30th.

Salam, who is a house wife and has grandchildren now, explains to Enab Baladi that she started drawing her paintings since the beginning of the revolution. All of her paintings expressed anguish and pain, what she and the people of Duma wished for and some of her paintings criticized the International Community.

Salam displays her paintings for the first time

The exhibition was organized with the patronage of the Syrian institution “Sawadna” (Our Arms) as a first organized in the area in the center of “Hewar” (Discussion) for development and it continued for three days. Salam said to Enab Baladi that she has failed to display her paintings for many times, to finally succeed through the encouragement of her family and the help of the institution in organizing it.

Raed Seryol, the project office manager of “Sawadna” institution, explains to Enab Baladi the aim behind organizing the exhibition, as it comes within the framework of the institution, is to support the women and children of Al Ghouta. “This is why we accepted the project and organized invitations, while the supervisors of “Hewar” center promoted for it through the other women’s events in the city.”

Salam had to hide her paintings many times through the breaking in that happened before liberating the city. She moved them when she was displaced outside the city with her family. She finished the paintings until she was finally able to display them, as she describes.

The paintings documented important phases in the life of the revolution

Chairman of Media Association in Eastern Ghouta, Hadi Abu Rayan, attended the exhibition and praised the content and the organizers of the women’s events. In his interview with Enab Baladi, he points out that “the exhibition includes expressive paintings that some of which have documented important phases of the revolution”. He hoped for more future events for the women of Ghouta.

Muhannad Al Nassan, a resident of Al Ghouta, visited the exhibition and was drawn to the elegance and organization of it, as he describes, in addition to the strong topics the paintings show, which fall into the core of Al Ghouta residents’ sufferings. He adds, “The paintings express my hobby in drawing and my visit is to have a look and enhance my artistic knowledge.”

“Sawadna” was established in February 2014 and has branches in each of Al Waer neighborhood in Homs and the cities and towns of south of Damascus, in addition to the refugee camps in Lebanon, not to mention its center in Eastern Ghouta. The institution engages in relief and medical fields, child psychological support, woman development, in addition to organizing many events, one of which is “Baraem of Syria” (Syrain Buds), a recent football tournament in Al Waer neighborhood in Homs.

At the end her the interview, Salam wished that her paintings of suffering and siege description would change into joy and happiness after reconstructing Syria, so that she would display them again “After the victory of the revolution.”