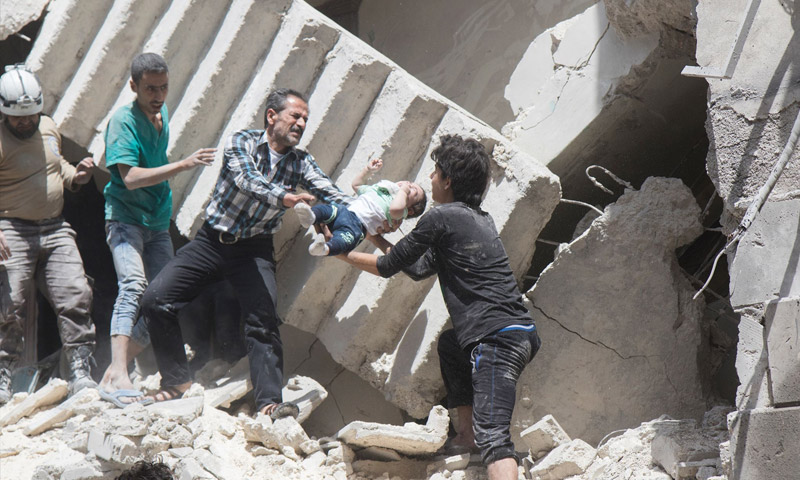 Warplanes carried out more than 15 air raids on opposition-controlled areas of Aleppo, hitting the districts of Sakhour, Ard al-Hamra and Old Aleppo, while Bustan al-Qasr and Kalaaseh saw three raids that killed 25 civilians according to preliminary reports.

Media activists Mahmoud Raslan told Enab Baladi that, “rockets hit the Bustan al-Qasr district and another hit Kalaaseh at 11 pm,” adding that “when people rushed to help the wounded in Kalaaseh, another rocket struck them.”

The preliminary toll of casualties reached ten in Bustan al-Qasr and 15 in Kalaaseh, according to information from activists and civil authorities in Aleppo, while victims are still being pulled from the rubble.

Warplanes struck the al-Quds hospital in the Sukari district Wednesday night with two air raids, destroying the facility and killing 50 people, bringing the total number of victims to at least 75 since Wednesday afternoon.

At the same time, areas under regime control in Aleppo were hit by rockets falling on a building in the Midan district, which the opposition “Eyewitness” webpage, which specializes in news from loyalist districts, said was hit by mistake by a regime plane.

Shells meanwhile struck the districts of Mogambo, Shahba, Jameiliyeh, and Ismailiyeh. There were reports of casualties, which the loyalist Al-Zaharaa News Network estimated at 18 civilians so far, pointing to the influx of ambulances to al-Razi hospital.