Syrian universities after the revolution: where do we go from here? 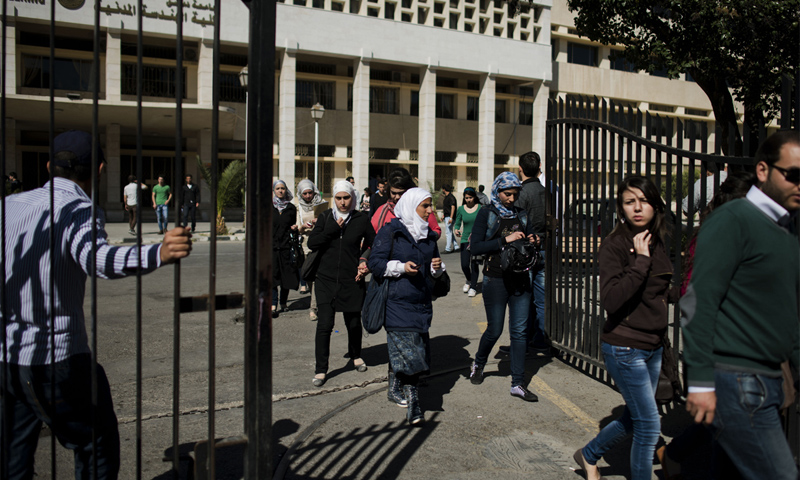 A university education is considered one of the standards for classifying countries culturally and scientifically. Often a degree can give hope for societal change and improvement in quality of life. Educated people become more familiar with the experiences of others, and are able to bring about changes in their surroundings.

In the Syrian case, universities may not have been the source of the revolution, but the revolution spread to universities. The regime sought to rapidly extinguish these movements by tightening its grip on universities specifically, keeping them under constant control and monitoring by relying on provisions in Syrian university law which allowed them to use violence on campus.

Today, on the fifth anniversary of the revolution, what is the educational-revolutionary landscape in Syrian universities like?

Damascus University… “Things are on point”

Sama, a civil engineering student in her fifth year at Damascus University, says that the overall functioning of the school compared to countries in turmoil is “normal and on point.”

Sama says university attendance is still required, and tallied, just like before. “For two years only a small percentage of students attended school because of the explosions and missiles that target the university. I myself stopped going to class and stayed at home, but things now are different.”

According to Sama, attendance is still required by most professors. They enter attendance rates into calculations for grades and final marks. She adds, “You feel like the University is a different place from the rest of Syria. There is no sympathy for students and no understanding of their situations, even though we have heard the sounds of warplanes, missiles and military parades. There is no recognition of the war in the hallways of the University.”

The only place you’re allowed to be in

Mohammad, an English literature student at Damascus University, agrees that attendance rates have been increasing, but in his opinion, this is because the university is the only place where young people are permitted to go. “As youth, the university has become the last refuge for us. We can’t walk on the street or sit in coffee shops with friends freely as we were able to before because we are afraid of raids or random arrests. The university is the only place relatively protected from these actions.”

Mohammad adds that youth today have three choices: the University, the army, or leaving Syria. Often, university is “the best bitter choice” out of these three, “until a young man obtains a degree that helps him later on in finding a job.”

Watching your steps… Or else

Political discourse has always been forbidden to Syrians, but today it can cause their deaths, too. Especially in government circles, the eyes and ears of the regime have multiplied. Sama says that there are no conversations dealing with the revolution or anything related to current political situations that could go among the students. “Repression is everywhere, and nobody dares to express their opinion, unlike the situation during the first two years of the revolution.”

Nour, also a student at Damascus University, shared the same opinion with Sama. She said any movement needs official approval from the administrative body. “Writing lectures, taking notes or publishing anything in the library requires the permission of the administration.” Nour points out that no students dare to violate these new rules, saying “no one wants to cause themselves any problems. We all say, it is only two more years and we will graduate. We want to be over with this prolonged journey in peace and with minimal hassle.”

Nour points to the migration of a large number of professors from the university, with unqualified replacements stepping in for them, sometimes from other disciplines. “The new teachers don’t have the same qualifications of those who left, and can’t address the same topics in their classes. The university is only interested in filling the vacant spots.”

The national union of Syrian students published a letter from the public affairs office of Damascus University which revealed that they have been unable to stop members of the university from leaving, calling it a “self-cleaning process” and that they are trying to make up the shortfall by any possible means.

Minister of Higher Education Sahar al-Fahoum said there are no accurate statistics measuring the number of faculty members who have left Syrian universities on the whole, but that “the available statistics show that those who have resigned or been dismissed from service in all the scientific colleges are no more than 14% of the total number of teachers.” She says this number should not affect the university, as absenteeism rates often reach 20% of teachers in normal circumstances.

Akram, a communications engineering student at Al-Ba’ath university in Homs, says that a phenomenon of Tashbeeh and thuggish behavior go around openly at his university along with the wide spread of armed protests, the thing that reinforces sectarianism among students and professors. He adds saying; “This kind of Tashbeeh went around before the revolution, but now it has become dependent on the influence of weapons as every student or professor who has relatives in the military thinks they can do anything they want with no consequences.”

Akram recounts something that happened in front of him in the exam room. “The examiner discovered a student was cheating on his exam, but the student used his influence and threatened him, saying, ‘give me the paper back or you will regret this,’ and the proctor couldn’t do anything except complying with his demands and perpetrating fraud in front of all of us.”

This phenomenon spread at Homs University after the revolution, particularly during military campaigns on Baba Amro neighborhood and opposing areas. Some professors volunteered with the national defense forces and participated in killing people after school hours, and then came to class in military uniforms. Akram considers this “one of the worst provocations that happened to us, because the teacher is giving us a lecture in military dress and has a military psychology. Some students also wore military clothing to school. This situation caused a tense atmosphere at the university.”

The participation of some students in the national defense forces helped them access opportunities for a master’s degree, according to Akram. “E. A. participated in military operations as a student. His G.P.A. was 60%, but when he joined the forces he was given the opportunity to apply for a master’s and a scholarship abroad. Other students with higher G.P.A.s were denied the same opportunity.”

The subject of buying school exams is a sensitive matter that requires a specific procedure in Syrian universities, Akram recounts. Students “needed to know the right person, a “key” for each professor in order to buy the exams. Everything from agreement, payment and collection would be done without meeting the involved teacher in order to protect his reputation.”

Today, though, there’s no longer any need for an intermediary who splits the profits with administrators and professors. Akram notes “A friend of mine living in Saudi Arabia needed just one more course to graduate. He went into the headmaster’s office and negotiated with him directly. They agreed he would pay $300 to graduate. It was so simple.”

Mohammad says situations of corruption like this one happen at Damascus University too, but with more caution and in other ways. They are more subtle and sometimes come in the form of bribes or gifts of expensive electronic equipment like cell phones.

The situation at each Syrian university depends on the province and on the interest that the regime has in it, but the common denominator among them cited by everyone Enab Baladi spoke with is the prevalence of extremely low success rates.

Mohammad thinks the main reason for this low rate of success is the situation that the students experience in their daily lives. “Students’ lives have completely changed, we no longer have a positive educational environment. On top of that, our grades depend on the moods of the professors when they grade, especially the new hires who are not qualified.”

Akram attributes the situation to the widespread of corruption. “In the beginning of the revolution, people were more lenient with students. Today, the situation has become very difficult in every respect — the questions, the grading and the curriculum. The rate of success has gone down significantly. I think they want to push students towards more corruption and towards purchasing more exams.”

According to Sama, this reduction in the success rate of students is “systematic and premeditated, not accidental.” She links it with the presence of a “third chance” to take exams: “the difficult questions and low success rate on one hand, and the possibility to retake the finals three times as ordered by presidential decree every few years, all indicate an intention to keep students studying, so that they can only think about passing exams, graduating and traveling after that.”

The National Union for Syrian Students published a number of complaints regarding subjects in which student success rate dropped to 0%, such as applied geography at the University of Tishreen, advanced software engineering for information technology students at the Al-Ba’ath University and civic examinations for law students at Damascus University, and many others.

How Syrian universities compare to the rest of the world

The Shanghai index, which was established in 2003, publishes a yearly list of the best 50 institutions of higher education. No Syrian institution has ever been on it.

In the list of the top 100 Arab universities, no Syrian university was among them in 2015.

Webometrics publishes a ranking of world universities on which Damascus University was listed as number 4,404, and Tishrin University came in at number 7,828 worldwide.