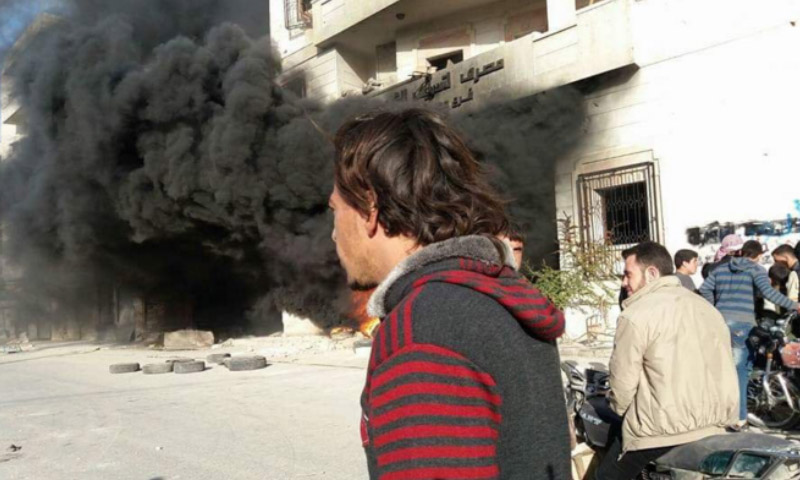 Protesters in the city of Maarat al-Nouman in the Idleb countryside set fire to the inside of a Nusra Front base in the city on Monday, in protest over their arrest of members of “Division 13” of the Free Syrian Army.

The website “Al-Marat Al-Youm” published a video recording showing dozens of protesters, including women and children, carrying the flag of the revolution in solidarity with the FSA unit, demanding Nusra Front releases the prisoners.

Activists reported that the protesters initially managed to release four prisoners from the base, later completely emptying the rest of the base amid a total absence of Nusra Front members.

Activists from the city published images of the building while it was being burned, while a local source confirmed to Enab Baladi that the base of the Nusra Front’s court was burned, and that fire trucks had been deployed.

Division 13 issued a statement on Sunday announcing it was continuing to fight the forces of the Assad regime and the Islamic State group in Aleppo, Hama and Lattakia, after an attack by the Nusra Front and the affiliated Jund al-Aqsa organization on their headquarters in the city of Maarat al-Nouman on Saturday night, resulting in the seizure of their bases as a number of militants from both sides were killed.

The Division had participated in most battles in the Idleb countryside, including the liberation of the Wadi al-Deif and Hamadiyeh camps. It had a prominent role in the fighting in northern and southern Idleb, alongside its participation in the fighting in Hama and Lattakia.