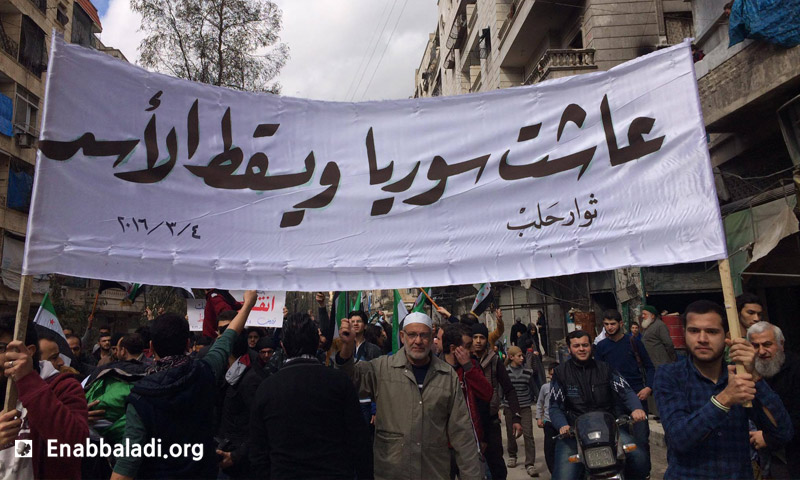 The cessation of hostilities in Syria has opened the door for a return of popular mobilization to the forefront, embodied by the joyful demonstrations demanding for freedom and the fall of the Assad regime in five of the country’s main provinces: Damascus, Aleppo, Daraa, Homs, and Idlib.

After the wane of civilian tactics because of fighting and bombing on the ground during the past three years, Syrians returned to these protests which resemble celebrations and carnivals in public spaces. March 4th saw demonstrations in more than 40 different spots, in an assembly collectively referred to as “The Revolution Continues.”

The color of the revolution returns to the street

Aleppo, which was faced with a possible siege after the advance of Assad and YPG forces last month, has witnessed demonstrations in more than one of its neighborhoods since the cessation of hostilities that began on Saturday, February 27th.

“This peaceful movement seeks the fall of the regime, a focus on the principles of the revolution, and believes that a Syria without Assad and his thugs would be more beautiful,” said the activist and Huthifa Dahman, who participated in the demonstrations.

“We want to bring back the spirit of the revolution to the street and to the revolutionaries and civilians, and to show the world that we are here to stay until the end of the regime and the countries occupying Syria leave,” said Dahman, who also works as a medic in field hospitals.

Ahmed Orabi, who helped organize protests in Talbiseh in the northern Homs countryside, told Enab Baladi that a group of activists decided to bring the revolution back to the square one since the beginning of the truce.

Orabi said they wanted to emphasize two things, “a rejection of the way that [the revolution] has been portrayed and the way the international is trying to portray it, that the revolution on the ground has transformed into a battle between regime forces and terrorists, as they are refer to them of course, and to show the spirit of determination among civilians, 80% of whom have been forced to take up arms because of the world’s inaction.”

The chants across Syria focused on freedom, the downfall of Assad’s regime, and supporting the Free Syrian Army.

“We had with us demonstrations from all of the Islamic brigades, but the protests saw a general acceptance that the flag of the revolution was the most important.”

The revolution remains “fragile” and subject to violations in limited areas, according to the U.N.’s special envoy to Syria, Steffan deMistura. However, this did not prevent protestors from taking to the streets.

“We received a warning from an observer that a Sukhoi plane had been spotted in the sky during a protests, but the people didn’t care and continued the protest,” said Orabi, adding that “whether peacefully or with arms, we will continue by any means until the fall of the regime, which is our main demand.”

Several leaders from the Free Syrian Army factions went out to the streets and participated in the demonstrations, including Col. Faris Biyush of the Northern Brigade, and Ahmad al-Saud, the head of 13th Division, Hussam Salam, one of leaders of Ahrar a-Sham, in addition to a number of leaders from the Southern Front in the southern city of Busra a-Sham.

“The Free Syrian Army is enthusiastic about the return of civil action, and many of its leaders are protesting in them, which is one of the most important symbols of the ongoing Syrian revolution,” said Osama Abu Zeid, a legal consultant for the FSA.

“Over the past several years, the issue has transformed in the media into an opposition war on the authorities, and the role of the popular support for the revolution has been absent,” he continued.

“Now there is talk of a political solution through putting pressure on the conflicting parties,” said Abu Zeid, adding that “the return of protests renews the legitimacy of the revolution and proves that if the Syrian people had been able to go on without weapons, then they would not have stopped protesting for even a day, and shows that the bombing and killing of the past five years has not discouraged people from taking to the street.”

Sarot, who was accused of joining ISIS by Jabhat a-Nusra and several other opposition brigades in Homs, and was a fugitive in the northern countryside, sang at the end of the video the song “Heaven, Heaven, O Country” which he became famous for singing during protests.

The former leader of the Martyrs of Bayadha Brigade added that “the Syrian revolution would continue until the fall of the regime and its supporters, Russia and Syria.”

The pace of the demonstrations picked up with the endurance of the cease fire, in its eight day at the time of writing, amidst international and UN efforts to support it, in a phenomenon described as surprising after four years of fighting, shelling, and fronts that never fell silent.