The people of the city of Raqqa await their fate “silently” 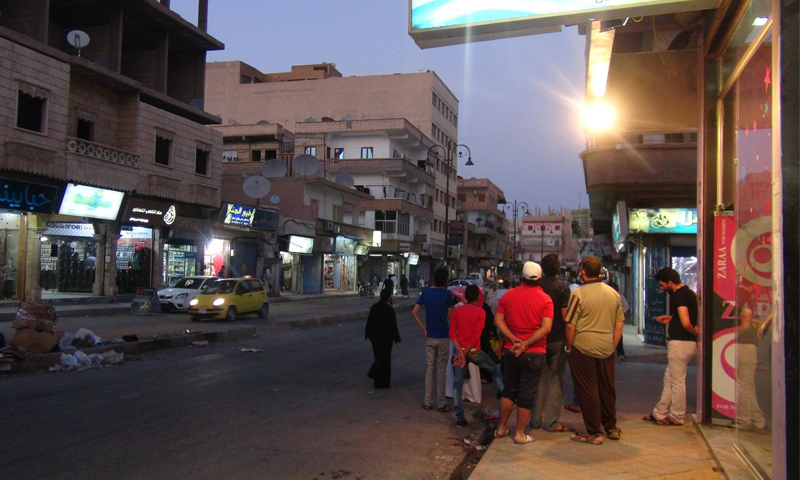 Many questions revolve in the minds of the people of the city of Raqqa, in light of recent statements made by the Syrian Regime and International Coalition forces, about the process to expel the Islamic State (IS) from the city. Most notably, these questions remark on what color the newly liberated city will fly- after the black flags of the Islamic State are finally lowered?

To date, Enab Baladi has not found a firm opinion amongst the views of the people surveyed throughout most of the city’s population; whether in their desire for liberation, or in wrestling control of the city from the hands of the Islamic State. In addition, the majority of the city’s inhabitants refused to accept either the launching of a ground war, or to the intensification of military strikes on their city, without first contemplating their own fate.

Recently, the city’s population began receiving news about the movements of armed militant factions, which had been operating throughout the northern countryside of the city of Raqqa. Abu Omar, a former teacher and owner of a grocery store in the city, cautiously expressed that ” It is almost certain that the Syrian Democratic Forces (SDF) are being led to conduct ground assaults in the city, and most people here are now speaking about the war and the upcoming destruction which awaits.

Indeed, bad experiences were soon faced by the population of the surrounding cities which had fallen under control of these armed militia forces, “from looting and displacement, to killings and the burning of houses,” according to the testimony of activists. Meanwhile, citizens began looking at the most recent attacks by Regime forces on the road to Al Raqqa- a quiet sector known for its archaeological sites, and on their coordination with these militant forces, as an attempt by the Regime to return to the city.

This is the viewpoint held by activists such as Hassan, who operates in Raqqa, and who’s views fall into agreement with many of the city’s other inhabitants that their opinions are “not being taken into consideration, under the shadow of the international conflict which is currently taking place on our land.” Furthermore, Hassan points to the grim reality that “we fuel this war, whose consequences began to appear on the faces of the people, as well as in their lives”.

“Die a thousand times every day from fear of the unknown”

The prices in the markets of Raqqa gradually began to rise, according to Hassan, and meanwhile, the inhabitants of the city have resorted to storing away some precious materials for fear of a coming city-wide siege. At the same time, hundreds of young people and families have tried to flee the city, from fears of government imposed regulations, which are calling for the compulsory recruitment of the city’s young men, and who will be forced to take up arms and fight.

Long lines of women stand everyday on the doors of “al Hisba” (The Islamic State Security Apparatus), waiting for permission to get out of the city, as many other young men and families try to escape by means of being smuggled out. As one unnamed resident of Raqqa put it, these extreme methods are taken “for the chance of getting out of this Hell.” The same resident also added that “We die a thousand times every day, from fear of the Regime, and from shelling, and from the unknown which awaits”.

Over the radio, “in a faint voice”

Confidential ongoing conversations in the “Capital of the Caliphate”, about winners and  losers, and about what is currently happening and what will ultimately happen in Raqqa, are continuously brought up and played before a crowd of Islamic State supporters, as described Abu Omar- speaking about the state of his city to reporters of Enab Baladi.

Samar, an inhabitant currently displaced in the town of Raqqa, explained that the Islamic State has ultimately “trapped residents, and has prevented the broadcast of  information deemed harmful to the organization, even going so far as to block the transmissions of satellite dishes.” He points out that many of the city’s inhabitants rely on follow-up radio commentary to the news, which relates to their city, and which has become another modern media outlet. Samar furthermore relates that while these radio commentaries are largely followed, they are done so secretly, and almost “in a whisper”.

While most military analysts relate that the siege of Raqqa may extend for months, it was the opinion of Samar that people will live “in a scenario similar to the battle of the city of Tel Abyad, or like the scenario of the city of Ayn al-Arab (Kobani), which resulted in extensive street-fighting.

Abu Mohammed, a defected colonel and former fighter in the FSA, said that warplane strikes, “will not have much impact on the organization, as it does not rely on heavy weapons, and that the number of factions in it continues to increase”.

Further included amongst Raqqa’s many remaining inhabitants, are many thousands of displaced families. According to Abu Mohammed, “the tactics of the organization are meant to increase people’s panic, and people fear being used as human shields, as factions of the Islamic State began to distribute people in all districts of Raqqa and its quarters, and began to deliberately hand out weapons and ammunition from among civilian areas.”

“Increasing human losses would be in the best interest of the organization”, confirms Abu Mohammed to Enab Baladi, “as it will use the matter to its advantage in expanding its popular base, which would increase people’s sympathy towards the organization and result in long-term gains”.

Abu Mohammed describes the silence of the people of Raqqa as “heavy”. It is a silence which hangs over the city as it awaits its fate; relegated to a dreadful state of waiting and anticipation. In the meantime, the number countries currently participating in the fight against the Islamic State continues to grow, and as more than 300 thousand people currently remain in the embattled city, it is the innocent local inhabitants which are the biggest losers.