What does the “Islamic State” Organization do in the western countryside villages of Der ez-Zor? 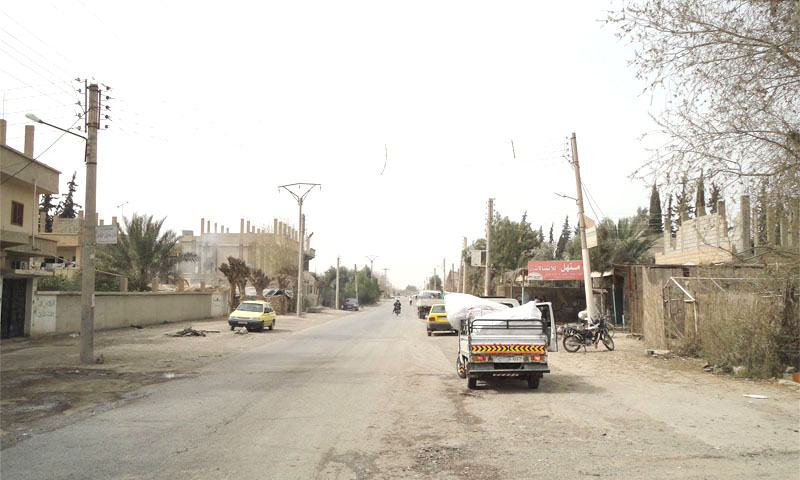 Haj Ali sits in a small room full of clothes and kitchen utensils, where he and his wife have lived for several months after migrating from the town of al-Jeneina (in the western countryside of Deir ez-Zour) following warnings made by the “Islamic State” to residents of the surrounding towns and villages. He speaks to reporters of Enab Baladi in a hoarse and condemning voice, and refers to the chaos surrounding the move, and the need to evacuate the areas which are accessible now only by elements of the military.

Enab Baladi spoke with Ali, who asks questions repeated by many of those currently living in similar conditions, but who dares not to object to the decisions of “the Organization” (IS). The questions brought up included “Why did we leave? How can they confiscate my brother’s house and arrest my cousin? Why did they booby-trap the homes of my neighbors? and what has been achieved after continuous months of military action against Regime sites in the region?”

“Few people here dare to talk about the actions of the Islamic State Organization, as any criticism of its leader may result in someone ending up dead and crucified in one of the squares,” suggests Ali’s wife- a woman who is currently in her 60’s and confines herself to her room, fearing the wrath of the Organization.

“On the banks of the wound.”

The majority of these villages are now empty of their residents, who have largely gone and deserted those villages, leaving them now almost all but empty. This, according to Mona, a displaced resident from the village of Hosseiniyeh, who pointed out to Enab Baladi that ” the Organization warned us to leave the area more than once, and we caved into their demands in the end, after they [the Islamic State] turned our villages into fire support bases, and made them centers by which to launch missiles at Regime-controlled areas.

Mona left with her ​​family in search of a safe place, leaving everything behind. She says that the homes in her village have become weapon depots for elements of the Organization, who has repeatedly declared the area a military zone, even though it has allowed some of its civilian “supporters” to return.

The rural villages of western Deir ez-Zor have seen several massacres, which has claimed the lives of dozens of martyrs- after warplanes directly targeted civilians, according to Abu Abdullah, one of those civilians who has returned to their homes with the approval of the Organization. He relates that “The shelling does not know the sanctity of this place, and [neither do] the Russians and the West, who take turns in ordering the bombing of these villages.”

The destruction of villages under various pretexts

“This is not the first time that members of the organization have expelled residents of the surrounding villages, after warning them to leave under various pretexts,” says Hassan, a defector from the Regime’s army, who had worked with the FSA in the area before it fell under control of the Organization.

Most of the “free” army members who have expressed their views (out of those polled by Enab Baladi), have shown their opposition to the Organization ‘s policies. Hassan goes on to describe that what goes on is “deliberate destruction”, stressing that what is happening is that the “Organization (IS) does not care about the residents in the areas it controls, and uses them as no more than human shields, in order to take advantage of their death or injury, and display it in the media. “

Furthermore, it deliberately organizes the deployment of its forces throughout the city, and stores their weapons among civilians, according to Hassan, who pointed to the destruction of villages and the displacement of its people. “Without achieving any military results, the Organization only works to make itself superior to those who came before it and controlled the region.”

The residents of these areas suggest that it was possible to find an alternative to the frontlines, and are skeptic to the goals of the Organization. “Its actions in evacuating the area were meant to ease its withdrawal, and the area’s delivery [back] to the Regime.” Meanwhile, members of the Organization and its sympathizers confirmed to Enab Baladi that “the fear of the local population and the need for military action are under the administration of the arenas of jihad and the battlefield.”

For now, no one has real answers to provide to the residents of the villages of the rural western countryside of Der ez-Zour. The area had fallen out of the Regime’s control in September, 2012, and was first dominated by the FSA, but then switched hands several times and fell under control of several different factions, before finally falling into the hands of the Islamic State in July, 2013, after a two-week battle. Since then, the Islamic State has worked to make the area the center of its training camps, as well as its legal and administrative one.