Internet Freedom in Syria: The Grip of the Regime Versus a Growing Digital Awareness Among Activists 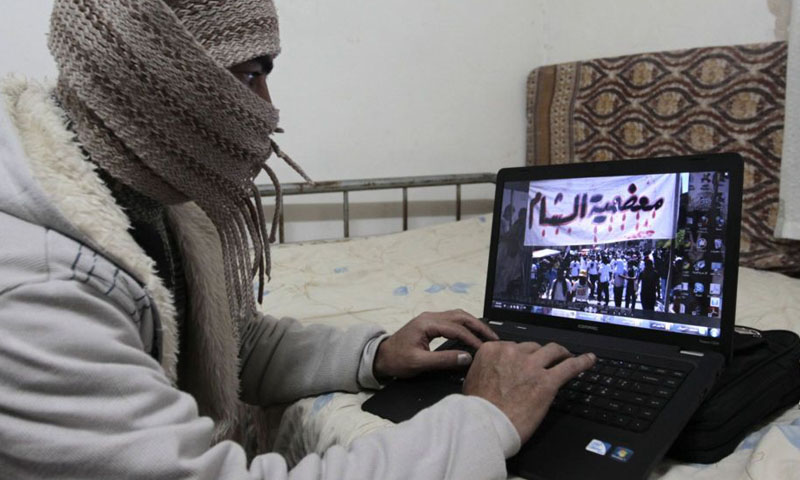 The role of social media and the Internet in forging connections amongst Arab Spring activists was substantial, and it did not go unnoticed by security and intelligence services in the region. They have devoted as many agents to online surveillance as they have to real-world events.

All of this has required the electronic activist to overcome virtual obstacles, similar to those he confronts in real life. So, how do Syrians deal with such intense surveillance in the midst of an ongoing revolution? And how has that affected their awareness of cyber security?

The Internet was introduced in Syria in the late nineties, but only the government had access to it in the beginning. Until 1999, Syrian citizens were not even allowed to subscribe to Internet services, as the organization, Human Rights Watch, mentioned in a report published that same year.

The organization’s report noted that “Syria continues to be the only country in the region that, while connected to the Internet, denies such access to its own citizens, even as some official departments have issued statements enumerating the many advantages of the Internet. The cautious approach pursued by the government is in line with their deliberate efforts to control all forms of expression that involve criticism of the prevailing political order.”

Fear of the Internet’s entrance into the country was, first and foremost, one of its impact on  state security. Amr Salem, the Minister of Communications at the time, presented suggestions to Hafez Al-Assad including pledges that any new technologies introduced would not, in any way, endanger Syria’s independence and security.

Ministry of the Interior or Communications?

Since the beginning, the network was ruled by a security and intelligence service obsessed with preventing Syrians from reading anything that the regime did not want them to know about, and with minimizing citizens’ ability to share their opinions in parts of the Internet that were beyond its reach. Such concerns entitled the Ministry of Interior, as opposed to the Ministry of Communications, to issue policy on restricting web access.

For young Syrians, the ability to access the Internet was a cognitive revolution in and of itself: blogs started to emerge and chat rooms began to form. Despite all attempts by the regime to know all the comings and goings of Syrian Internet users, its surveillance could not capture everything. Maisam, an engineer and activist who participated in civil events of the Syrian Revolution from the outset, spoke about her use of  proxies, a practice she started years before the revolution.  “My aim was often to access news websites, such as Al Jazeera, Elaph and others, as well as Blogspot, not to mention that most religious websites were blocked, in addition to Wikipedia.”

The Internet enabled some opposing voices to emerge, such as “Rayih wa mesh Raje'” (Leaving and not coming back), a blog which belonged to the activist Mohammad Al Abdullah, on which he published opinions critical of the regime written in brave language in 2006. However, the courageous language itself was enough of an act of defiance that it forced him to leave the country in 2007, never to return, just as the title of his blog suggests.

A Popular Revolution, a Monitored Internet

With the beginning of the Syrian Revolution and the outbreak of protests, the Internet became the nerve center of communication among activists. The regime’s need for monitoring became more urgent, which put activists in imminent danger. They started learning techniques that would help them bypass the regime’s controls. Maisam added, “I would never surf the Internet without using Tor, to conceal my connection, especially when connecting from a public network, along with the setting for anonymous browsing. I would never save documents that could be damaging to me if found on my laptop. Instead, I would upload them to Google drive. I would also use a fake identity for all of my activities.”

However, the regime took Maisam by surprise. They arrested one of the activists with whom she used to work and sent her emails from his account. She continued, “I had no idea that my colleague had been arrested. He agreed to meet so that I could get some medications from him, just like we had agreed to the day before. There I found the agents waiting for me. My world turned upside down as I realized it was an ambush.”

Maisam met her colleague at the Military Intelligence Directorate. The accusations against both of them were absolute and they were not given a chance to deny them, as she puts it. She adds that “the interrogator confronted us with the chats between us and, even though we were using fake identities and deleted our Facebook chats, they were able to recover them. I remained in prison for two months and was tortured. They let me go, but my friend is still there.”

The Regime is Clueless With Technology

Thaer, a doctor from Hama, had a different experience from Maisam. He did not feel the regime’s gaze in the first months of the revolution. He says that, “at the beginning, I did not take many precautions. I had a strong feeling, as did many others, that the regime would fall within a few weeks or months. Therefore, we didn’t feel the need for caution and protection, not to mention that most of us thought the regime was ignorant in matters of technology and informatics and that this particular field was one that could not be used to its advantage at all.”

But the months and weeks have passed and the regime appears stable. The arrest of some activists made Thaer, and those who shared his view of the regime, think again and look for ways to bolster their cyber security. The doctor continues, saying, “many detainees told us, after their release, that the investigations against them had uncovered the personal details of their various online accounts and this information was used as evidence to incriminate them, their friends and those who worked with them. Moreover, some reports leaked saying that the regime had installed high-level spyware on Internet servers. All of these factors motivated us to read about and look closely at cyber security.”

In October 2011 The Wall Street Journal published statements by Blue Coat Systems, which noted that the Syrian regime was using their systems to monitor the Internet.

How Does the Regime Hack Activists’ Accounts?

Tareef Ateek, a blogger at Wadi Taqniyah, considers the easiest way for the regime to access activists’ accounts, which is also its most favored means, is through social engineering. He explains that “social engineering is simply using the art of deception and illusion to make the victim offer up confidential information on their own. This method does not require deep technical knowledge. All it needs is some deception and malice along with some patience, waiting for the victim to misstep.”

According to Ateek, “an example of social engineering is reaching an activist by hacking the accounts of people around him, which then allows the hacker to reach him. Likewise, the hacker could inject an empty or fake Microsoft Word document with malware and then upload it to the Internet, using a title that suggests the file contains classified information — perhaps a wanted list from one of the security agencies. The victim would then download the file and open it, becoming prey to the spyware without even knowing about it.”

Ateek considers taking cyber security measures to be important for all Internet users, no matter where they are or how confidential their conversations, “especially given the assassinations taking place in liberated areas or in neighboring countries by ISIS and the regime, along with the theft of computers or accounts of people outside Syria in order to access the data of activists inside the country. You must always remember that you might not be a direct target, but when you underrate cyber security, you could put the lives of other activists in danger.”

Tareef advises people not to reveal their personal identities and whereabouts once they break free of the regime’s grasp. Also, they should encrypt their emails and other data. He gives some examples of the above, such as “communicating over a trusted VPN or concealing communications with programs like Tor. Telegram and Signal for Android can ensure greater protection for you and those you are talking to than WhatsApp and Viber. He also advises people not to click on any link or download any file without first verifying its safety through tools available on the Internet, no matter how confident you are of the sender, as he could have easily been hacked.”

Cyber Security by the Numbers: