Your Health is in Your Hands: Hygiene Awareness Campaign in Eastern Ghouta 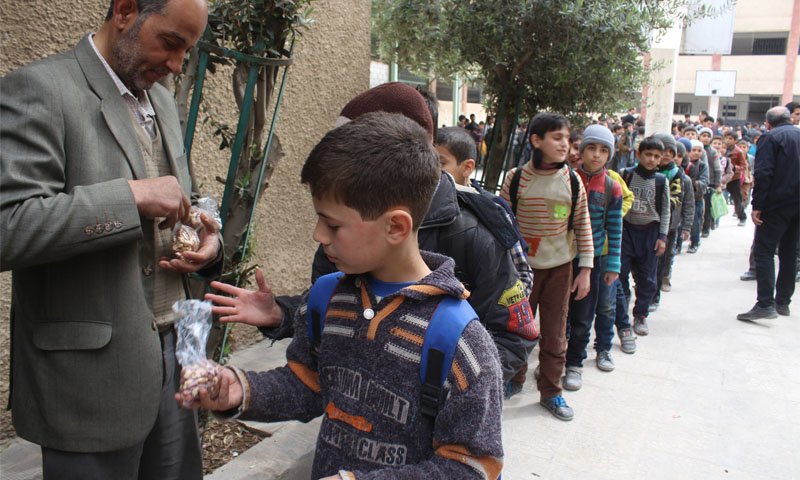 The campaign “Your Health is in Your Hands,” began in the Women’s Office of the Local Council in the city of Duma on the 21st of March in coordination with several civil activities in the city. This campaign began in regards to the spread of garbage and the necessity to find a solution for the problem through educating families. This campaign will continue though till April the 20th.

Bayan Riyhan, president of the Women’s Office, told Enab Baladi that her office discussed the idea along with women’s activities in Ghouta, in addition to civil society organizations. She noted that she began this campaign with university female students through a workshop that included them with other women’s activities.

According to Riyhan, the campaign includes volunteers to assist in achieving the primary goal, which is to elevate the level of public hygiene in the city and to change the way some Syrians perceive waste collectors and give them more respect. Riyhan draws the attention to the activities included in the campaign besides the media coverage and a closing ceremony.

The activities and events are held in several venues including schools, women’s centers, and Masjids (Muslims’ Prayer centers). Organizations; such as Civil Defense bureau, the Red Crescent, and women’s groups like “Women Now,” and “The Next Day” all participate in these activities.

The events vary among the venues; the women’s centers host a series of lectures tackling different subjects most notably raising the awareness of school principals and teachers, in addition to ways of guiding students in this regard. There are also lectures regarding health, environment, and economy, as well as recycling. Not to mention the educational lectures in order to guide parents on how to deal with their children.

The foundation “The Next day,” organized lectures at the beginning of the campaign. In his interview with Enab Baladi, Muhammad Hijazi, a public affairs official at the foundation, considered that the project of communication aims at raising awareness of the importance of the civil society, as well as initiating discussions about the future of Syria, in addition to supporting the ideas and events that the civil working groups undertake in Ghouta.

The foundation participated in the campaign, as one of its goals falls into the principle of community participation, as Mr. Hijazi said, in order to; “express opinions throughout seminars.” “As it is difficult to persuade people to attend these types of lectures. Most of the people of Ghouta do not accept the invitations. Nevertheless, we will try to increase these events so that people grow accustomed to them.” He added.

Activities include meetings with students at the end of the school day. They also include songs and recreational activities. Students then are directed to clean the schools, which they will in turn appreciate, according to the head of the Guidance Department at the Office of Education, Subhi Abdel Aziz.

The second axis consists of awareness lectures for teachers and administrators. These lectures revolve around personal and public hygiene knowledge for students, and encourages teachers to allocate ten minutes out of their classes to introduce students to these matters.

The campaign will be concluded with a competition for the most beautiful school and best administration and teacher. Bombing does not count against a school, yet evaluation might be conducted on the basis of organization and cleanliness in addition to educational standards, such as; discipline as well as the commitment of teachers and students administratively, explained Mr. Abdel Aziz to Enab Baladi.

After attending a seminar on raising awareness for teachers, Mohammad Ali, a teacher in the city of Duma, thanked the directors of the campaign for conveying a culture of cleanliness to their students. It is very important not only to clean the country of corruption, but also “to build the clean tomorrow of Syria—a country of renaissance and prosperity.”

The truce has been a key factor in the success of the campaign, according to the directors of the activities, as most of the activities have taken place in open spaces. The activities would have been cancelled if the bombing, which the cities and towns of Ghouta were subjected to on a daily basis, has continued, but they have witnessed a relative lull since the truce.