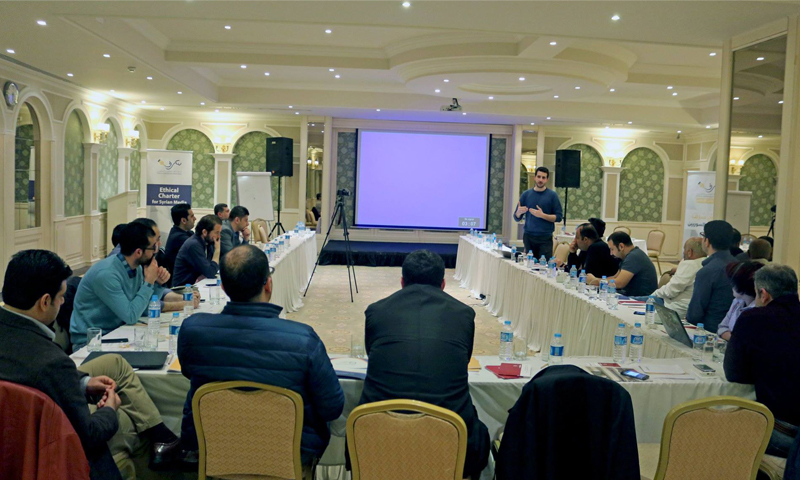 At the beginning of this week (early February 2016), Enab Baladi in collaboration with the Syrian Print-Media Archive, a project run by Enab Baladi’s team, hosted a discussion-based forum on “the Syrian New Alternative Media” and its coverage of certain issues of interest to the Syrian public. The forum was attended by a number of Syrian journalists and editors in chief of the most prominent Syrian media outlets and newspapers. The attendees discussed the results of several research papers conducted by the Archive researchers, led by Muhammad Rushdi Sharbaji, about new newspapers coverage of a variety of issues of interest to the Syrian people, such as emigration, Transitional Justice, Jihadist Organizations, the Kurds, Women Struggle, Israel, among other topics.

Jawad Sharbaji, the editor in chief of Enab Baladi, opened the discussion by stating that the research was an initiative by the Syrian Print-Media Archive in an attempt to re-examine the content that local newspapers had produced, especially content dealing with Syrian-specific issues. He also commented on what conclusions could be formed on these issues, nothing that the research was not a content-analysis in the scientific sense of the term, but simply a study of the coverage of certain issues

Muhammed Rushdi Sharbaji, the main researcher, presented how he undertook the six research papers that he wrote with cooperation from the Archive over the last six months, and how he chose the subjects, which focused on Kurds, transitional justice, jihadist organizations in Syria, the conflict with Israel, Syrian women, and Syrian emigration.

The discussion lasted for an hour and a half, during which time the researcher answered the questions of editors-in-chief and listened to their critiques of the research. The editors stressed the importance of addressing similar issues of importance to the Syrian public in depth and paying attention to the new media in Syria.

Enab Baladi launched the Syrian Print-Media Archive website in October 2014. The website preserves newspapers and magazines published since the beginning of the Syrian uprising, and as of February included 292 newspapers, including 6300 issues, for a total of 93,000 pages.

Side Meetings at the Forum

Sirwan Birku, the editor in chief for Arta FM, pointed out that the scope of the research was limited to Arab areas and did not include Kurdish regions, especially women’s issues there. He expressed his belief that if there were better communication between different alternative media foundations, the dearth of information related to Kurdish issues could be overcome.

According to Yousef al-Sadiq, the director of the Aleppo Media Center, the papers were well-done, but were not based on “scientific” research methods. He added that “research in media field has certain rules, the most important of which is specifying the content, and that if the work was done with all media formats, both digital and electronic, this would be better.”

Sadiq noted that media  organizations had not run any type of studies, saying that “this loses the compass,” and we don’t have the ability to identify the priorities and direction, and the mistakes and types of development and change. The subjects of these research papers are very important, and we are in an exceptional state and if we were able to undertake this type of research it would be a very big step.”

A member of the Syrian Journalists Association, the media activist Qutayba al-Khatib, said that when taking on thorny issues, especially the Kurdish issue, the research must be in-depth, and the author must not simply take projections and illuminations from historical references only, saying that “four pages on an issue like the Kurdish one is not enough, this issue could take up an entire issue of a journal.”

He also noted that that scientific research requires much effort and time, and that this type of research into new media was entirely missing the point except for some individual initiatives, saying that “there is neglect for a number for difficult issues in Syria (Sunnis, Assyrians, Syriacs, Kurds, and others).”

Also remaking on the quality of the studies, Rami Swaid, the editor in chief of the al-Gherbal newspaper, said that they were of great importance and considered them an important overview of what had been accomplished in print journalism in the past six months. He said that although the studies are somewhat limited, as they do not include all newspapers, they focused on the nine most stable well-known news publications in the Syrian new media, and these newspapers have the greatest responsibility in covering pressing issues objectively and professionally.”

“Mr. Rushdi made a great effort; while the work of an individual or small group cannot compete with research institutions, he did an important work given the available resources.”

According to Swaid, the weak spots in the papers could be useful if they lead to more professional studies that adhere to scientific standards, using graphs, statistics, and comparisons. He said that if this type of work is done in the future, it would produce results more important than examining a narrative reading of certain issues in the print media.

Mr. Rushdi Sharbaji, the head researcher, emphasized that his six papers were “not research” but a tracing of certain ideas and how the alternative media dealt with them, saying that “this is not a content analysis, but simply analysis of the Syrian media  coverage of certain issues.”

He also stated that the ideas suggested by the forum participants were very good.

“As far as if it is possible to turn this overview into a “scientific research” requires a lot in terms of experience and resources, and I am not specialized in content-analysis.”

Sharbaji explained that “in future papers we could focus more on the content in terms of statistics and numbers, but that requires more time, as well as putting in place clear standards for the newspapers that we want to include,” adding that “there are criticisms that the studies ignored some forms of media, and that is not true.”