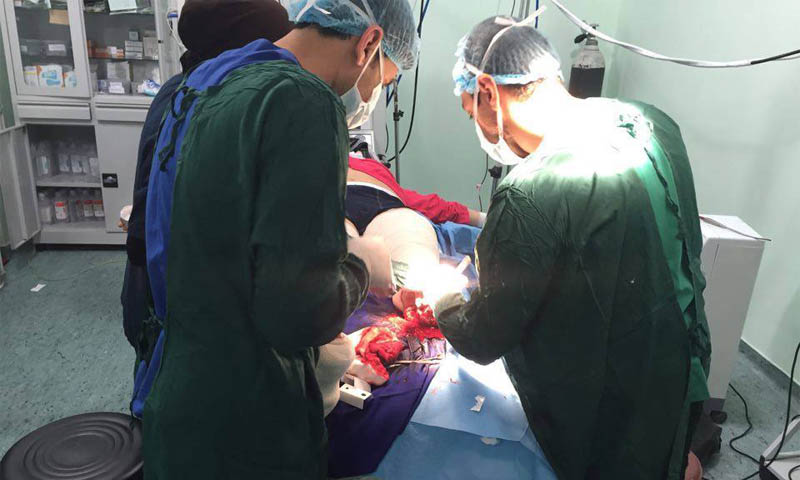 The condition of the health sector in Al-Hasakah Province has become critical following an exodus of medical staff and the cessation of production by local pharmaceutical companies, not to mention the complete lack of health oversight. Meanwhile, as the situation deteriorates in the countryside of Al-Hasakah, prices rise as the Syrian Pound continues to fall in value.

A significant number of medical and pharmacy staff, whom Enab Baladi encountered in Al-Hasakah, highlighted the potential for a deadly outbreak of disease, given the ongoing shortage of vaccines and medicines.

The official responsible for the vaccinations department within the Health Oversight Group in Al-Hasakah, Hussein Omar, explained to Enab Baladi that the city and the surrounding countryside are suffering from a shortage of vaccinations for hepatitis and the “5-in-1 vaccine” for diphtheria, tetanus, whooping cough, polio and influenza, as well as booster shots for measles and chickenpox.

The group, which is associated with the Health Administration of the Syrian regime, oversees health centers in Al-Hasakah as well as the national clinic. Omar noted that, according to reports obtained by the group from 189 health centers, “there are approximately 56,365 children in need of required vaccinations.”

Doctor Fuad Nuwayrah, a specialist in gastrointestinal illness, believes that those in charge at the Health Administration have kept quiet about the spread of disease in Al-Hasakah. He added, “I work at the National Clinic in Al-Qamishli and we have dozens of cases resembling swine flu. The clinic staff are terrified that the numbers will increase after two patients from that group died at the beginning of March.”

The nurse at the clinic, Zahra Masoud, reported to Enab Baladi that she was part of a special mobile vaccination team which, with each campaign, provided immunizations to about 2,500 children. She added that “when the Health Administration used to offer vaccinations on a routine basis, we never considered organizing a traveling team in the Province. However, now such services are almost entirely absent.”

The Elian Charitable Society conducted a comprehensive survey of the countryside in southern Al-Hasakah and documented 1,289 cases of leishmaniasis (an infection spread by sandflies). According to the official responsible for the review, Javan Seif Eddin, who paraphrased the remarks of a dermatologist, those infected with the disease must be quarantined and given special antibodies. However, these are not available and he feared that “a widespread outbreak of the disease was imminent.”

Shortage of Medicine as its Price Rises

The pharmacy technician, Nazhan Muhammad, who works at the al-Qamishli Clinic, explained to Enab Baladi, that the Health Administration supplied the clinics and health centers on a monthly basis before the outbreak of the revolution, and these supplies included medication. He said that “the clinic would get tons of medicine, including all that was available from national industries, which were known to be of excellent quality.”

Muhammad mentioned that the supply of medicine to the clinic was interrupted as the revolution entered its second year, and he declared that “were it not for the activities of humanitarian organizations, which provide smuggled foreign medicine to clinics and hospitals, the situation would be much worse from what we are experiencing today.”

From her perspective in Al-Hasakah, the pharmacist Nahla Rashid explained to Enab Baladi that the medicine provided nowadays in pharmacies “is smuggled and unlicensed, especially since prices have risen considerably in the absence of legal constraints and health oversight. In particular, these trends have worsened after control of the area was partitioned amongst several factions.”

A number of companies producing medication have ceased to operate after they were targeted by Syrian regime forces, especially in Aleppo and Homs provinces, which made it easy for pharmacists to control the price of medication and to implement set rates, when they lack any means of inspection.

An Exodus of Doctors and Specialists

Doctor Marwan Said recently left for Germany after working with the Health Administration in Al-Hasakah. He explained to Enab Baladi that statistics from the Administration for the end of 2015 showed that 1,857 doctors from health center and clinic staff in Al-Hasakah Province had emigrated.

Likewise, 654 pharmacists had left work in addition to a large number of other medical staff, such as technicians, nurses and doctor’s assistants, “because salaries had fallen and security measures had taken a toll on them,” according to Said.

The Ill Pay the Price

All of the above has had severe negative repercussions on those suffering from illness as they face rising prices and a dearth of medical professionals. Enab Baladi spoke with an elderly man named Hussein Al-Umar who said that his wife (65 years old) suffers from heart attacks, adding that “she was examined at the Issam Bighadi Clinic in al-Hasakah, the only one which has the specialized equipment required for a cardiac catheterization procedure. The clinic said it would cost 400,000. I don’t even have a quarter of what they asked for.”

The nurse Fatema Muhammad Amin explained to Enab Baladi that she conducts a surgical operation which removes a benign mass from the uterus at one of the specialist clinics in al-Qamishli. She said that the procedure can cost “up to 225,000 Syrian Pounds, excluding expenses for medicine, examinations and x-rays.”

The deterioration in the state of medical services is also contributing to the spread of several diseases in the region, including hepatitis A, skin cancers, polio and leishmaniasis, according to cases recorded by clinics in Al-Hasakah amid total silence from the Health Administration and absent of any concern for limiting the spread of disease.