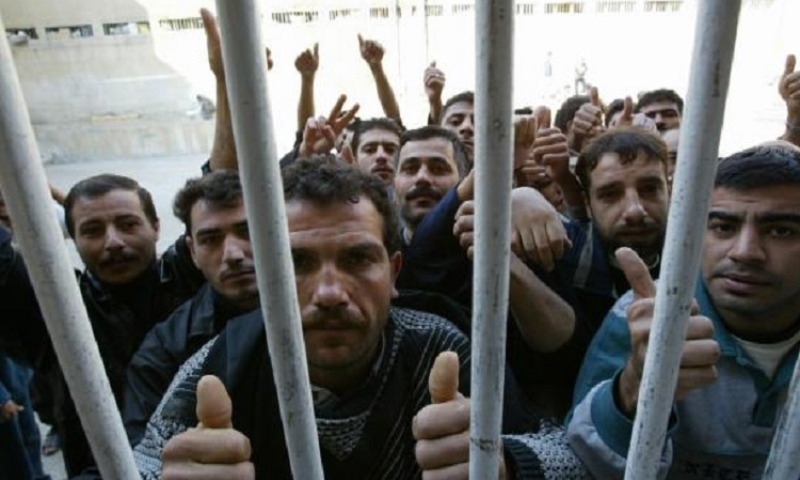 Thousands of detainees transferred from Adra central prison to ill-equipped facilities, while authorities continue to profit from extorting inmates and their family members

The transfer of political detainees and criminal prisoners from the central Adra prison to facilities in other provinces has not stopped, causing negative effects on inmates and their families while the Syrian regime continues to benefit from these operations.

“Arbitrary” transfers under the pretext of increasing numbers

A member of the “Prisoners’ Voice” campaign, Rayan al-Shami, told Enab Baladi that the transfers were being carried out arbitrarily from Adra to other central prisons in the provinces (Suweida, Hama, Tartous and Lattakia), except Homs prison. He added that the last transfer was documented at the start of this year, and included about 200 political and military detainees and criminal prisoners.

The largest batch of transfers came at the beginning of 2015, specifically in February. The administration’s excuse was to cope with increasing numbers, according to Shami, and included between 1,500 and 2,000 prisoners.

Transfers occur regularly for detainees from Damascus and its outskirts, according to Shami, adding that those from other provinces are transferred arbitrarily.

The campaign member said that the transfers also have other dimensions, such as creating fear about operations near Adra. He asked: “Why didn’t the regime transfer them from the overcrowded Adra to central prisons in their provinces if the reason was to increase the numbers?”

Negative effects on families and material benefit for the regime

The transfer of detainees has negative consequences for their families, since it is rarely possible for relatives to visit them “because of the difficulty of the road.” Shami noted that “communication with the inmates is only available by phone, and family members must make payments of extortion money to reach their children.”

The transfer includes a material benefit for the regime, according to Shami, who said: “What is earned from the inmates is distributed among the central prisons from administration and police officers and political security, as they are forced to buy food, and pay to stop the police from harming them, who also gain from the family’s transfer of money to their loved ones.”

The other “unprepared” prisons

Shami said the new prisons were unprepared to “absorb the increase, both in terms of numbers and services,” indicating that the issue “was a reason for the problems that ignited between political detainees and criminal prisoners in Tartous.”

Criminal prisoners are transferred to a terrorism court to attend their sessions daily from all provinces, because the terrorism court is centralized and does not have branches in the provinces. Prisoners are put in a holding room in the Adra prison “which is not prepared. The prisoner may remain in it a week, and subsequently becomes fatigued.”

Activists circulated news that several days ago the Syrian regime had begun the transfer of prisoners from the Adra prison in Damascus to its prisons in Lattakia and Tartous.

The activist Serraj al-Hasakawi told Enab Baladi that most of the prisoners were residents of the eastern region (Hassakeh and Deir-ez-Zor), adding that their numbers reached 50 people over two days.