Daraya Residents Demand the Entry of Aid, Twelve Days after the “Truce” 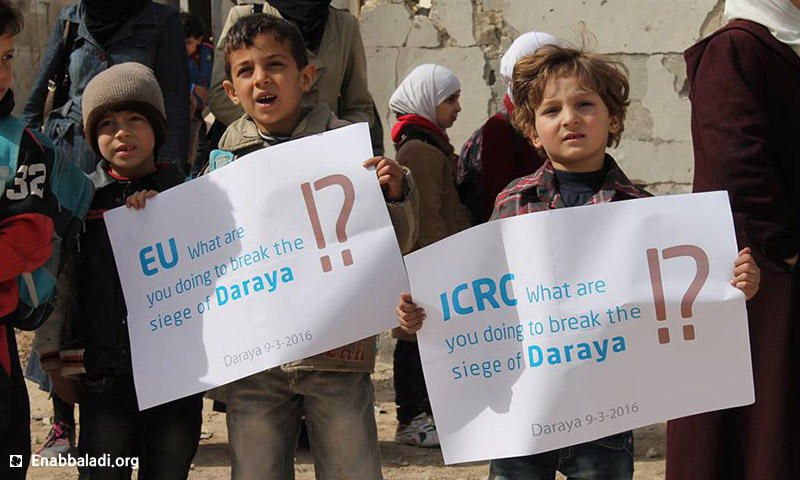 The residents of the besieged city of Daraya, located in the Western Ghoutta of the countryside of Damascus, rallied together at noon on Wednesday, March 9th, and organized a sit-in calling for the entry of humanitarian aid to the city, just twelve days after the start of the truce brokered between the Regime and anti-government forces.

According to Hussam Ayyash, a member of the city’s local council, the purpose of the rally was to “follow-up on the subject of bringing aid and relief to the city.”

Ayyash went on to describe the humanitarian situation in the city of Daraya as “poor”, especially after being cut off from the neighboring city of Muadamyat al-Sham, and emphasized “We are in urgent need to see the entry of medical aid and food to the city.”

Abu Khalid Albalaksi, one of the participants in the rally who was interviewed by Enab Baladi, stated that twelve days were not enough to bring any aid into the city, and further added that “while it is true that while the barrel bombs have stopped, death and hunger still besiege us.”

Over the last few days, the city has witnessed a period of relative calm, since the cessation of hostilities which began on the early morning of Saturday, February 27.

According to the local council estimates, there are now nearly 8,300 civilians still living in Daraya, out of the original 250 thousand resident who had once inhabited the city before the start of the Syrian Revolution. These remaining residents desperately and incessantly are calling upon the United Nations to bring aid and relief, and to allow the entry of medicine, food, and medical supplies into the city, after more than three long years of continual siege.