Daraya… a Ghost Town, Once Again Comes to Life 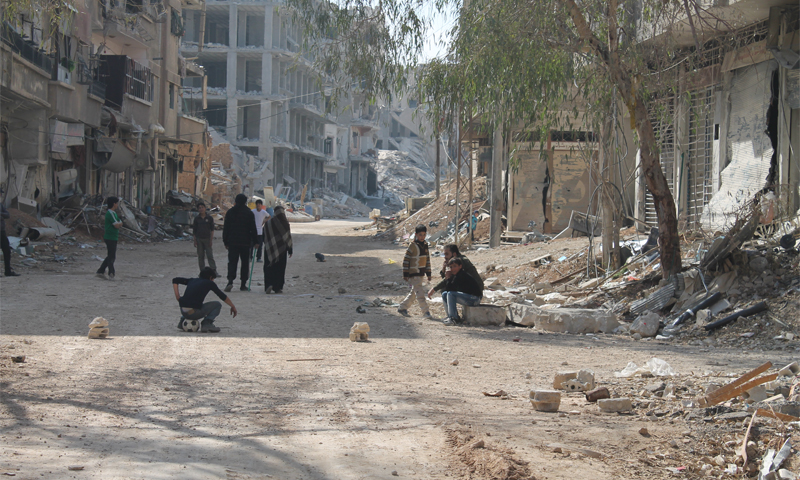 Daraya… a ghost town, once again comes to life- as if in a “holiday”, as the ceasefire is enacted.

The little girls asked: if the truce were to end- will the airplanes come back and bomb us?

Life once again started returning to the town of Daraya, within the first few hours of the commencement of a ceasefire agreement, which took hold at dawn on Saturday February 27, putting a pause on more than three years of continual fighting and bombardment from the Regime’s destructive barrel bombs.

Enab Baladi, touring the city’s streets and surveying its local residents, noticed that the atmosphere was eerily similar to the feelings felt during the holidays- when the city was under years of continual siege. Struggling, the people of the city of Daraya spoke of the “heartache”, which was shared by many of the local inhabitants, at the loss of so many of the city’s young men and women during the days leading up to the ceasefire.

The city and its streets are now largely devoid of families, who once freely came and visited each other, before the onset of heavy bombardment by the Assad Regime. Taking advantage of the temporary ceasefire, locals used the opportunity in checking on the condition of the city’s now damaged streets and buildings. Also witnessed, was the gathering of small children, who, taking advantage of every single minute of ceasefire in the city, came outside to play.

Farah Yahya, a small, timid girl of eight years old, said that she does not want to stop playing until the truce ends. Voicing her concerns, she reportedly asked, “if the truce ends- will the airplanes come back and bomb us?” before pausing and adding “I don’t want to die here…”

Going on to describe the sensation of living through the Regime’s aerial bombardment- when barrel bombs are being dropped- Farah related that “When I first heard the sound of the airplane approaching, I didn’t know where to run or hide… I just ran towards my mother, closed my eyes, and covered my ears.”

Farah’s condition is not much different from that of most of the other children trapped throughout the city, whose numbers average some 1150 children, including 450 babies. Meanwhile, the city’s schools are doing all they can in their efforts to help those children suffering from fear and panic- by conducting activities and concerts for them, in hopes of once again restoring joy to their little hearts.

One local school, known fondly as the “Hope of the Nation”, set up a concert on Wednesday March 2nd, which was attended by representatives from the local council and the leadership of the “Martyrs of Islam” Brigade. The concert included singing and entertainment, as well as speeches given by the representative of Daraya’s local council and the brigade’s commander. These speeches were meant to help motivate the children, raise their morale in coping with the difficult circumstances, and help them get through this difficult phase in their lives, according to Karam al-Shami, the Director of the Council’s Office of Media and Information.

When interviewed by Enab Baladi, Abu Emad Khoulani, Director of the Education Committee and President of the local council, stated that “the Education Committee, working together with the board of the ‘Hope of the Nation’ school, garnered interest in the recent truce, and used the opportunity in holding recreational activities and excursions for the city’s children. These activities were held in the hopes of helping the city’s children cope with the frustrations and hardships they faced, and which were caused by the trauma they witnessed while living for months at a time under the incessant threat of the Regime’s barrel bombs- which fell relentlessly from the sky and threatened their lives every day.” Abu Emad Khoulani went on to add that “In addition to the establishment of competitions meant to help motivate the children to learn, the school specially designated two days of the week for fun and recreational activities, in addition to the distribution of candies.”

Finally, Abu Emad added, “Perhaps the children are the biggest beneficiaries of the ceasefire, as their joy and smiles never leave their faces.”

Media Office Director, Karam al-Shami, said in an interview that the city has once again returned to life, after virtually being a ghost town- referring to the state of anxiety and fear among local residents, in regard to their uncertain future and what awaits them after the expiration of the truce.”

The Peaceful Demonstrations back to the Forefront

The most beautiful thing to come out after the first week of ceasefire was demonstrations- which were held and attended by the city’s residents, as well as by local revolutionaries, who gathered together in remembrance of prior peaceful days and demonstrations. Also brought up was the heartache felt for the parting of friends, martyrs, and detainees- according to Karam al-Shami, who pointed out that the city cleaned and restored a mosque, making special mention of the prayer meetings which were to be held on Fridays, which were put off for more than a year because of the heavy shelling and bombardment on the city. Karam then went on to describe these days of ceasefire as a “holiday.”

However, Karam further stressed that “the ceasefire is not enough to end the suffering of the people, who are still living under siege and are desperately in need of relief and medical assistance.”

In light of this view, Abu Emad asserts that, “What we are experiencing now are the civil aspects of the truce, and what we are further seeing is a return to peaceful activity to the demonstrations- which confirms that the Syrian people are still sticking to their original demands in the overthrow of the Regime (and the departure of all its symbols) while at the same time emphasizing the need for peaceful revolution, and looking forward to a political solution to end the people’s suffering.”

At the conclusion of his speech, Abu Emad said that “several states are building their glory and achieving their own interests on the skulls of the Syrian people- despite their ability to stop the bloodshed by imposing a political solution to the crisis. The International community knows and sees what the Regime and its allies are doing, in terms of massacres and human-rights violations”.

Abu Emad ends sarcastically mocking the international community inaction in Syria through a poem by famous Syrian poet, Adib Ishaq, who once said: “To kill a man in a forest is an unforgivable crime, but to exterminate a whole safe People is an arguable question.”