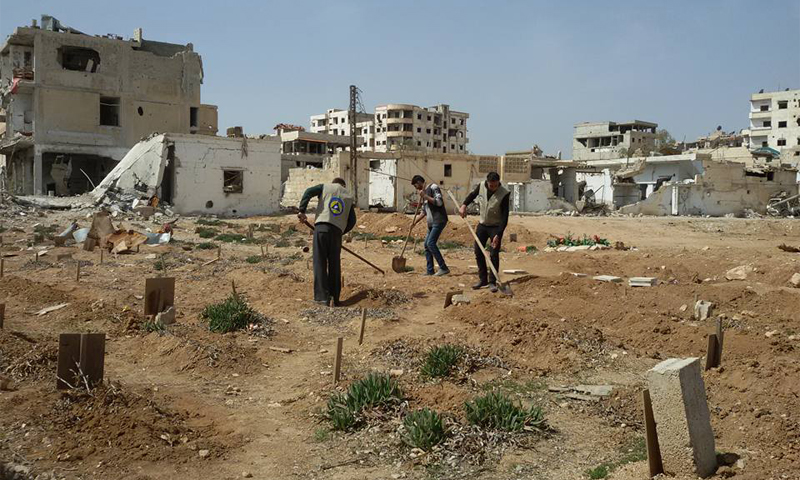 With the start of the cease-fire in Syria, there has emerged an important new role for the Civil Defense in the city of Daraya, which has used the opportunity to organize several activities to restore the city’s badly damaged areas, and move away from the legacy of heavy shelling and the battle which had lasted for months.

The city’s Civil Defense, starting within the first day of the cease-fire which was enacted on February 27th, began working in partnership with activists in the city- in renovating and repairing the only remaining mosque, who’s prayer services were interrupted for nearly eight months due to damage caused by direct hits from the Regime’s explosive barrel bombs.

And prayer services once again began in the mosque within the first Friday of the truce, according to reports by Imad Abu Suleiman, Director of the Civil Defense, who adds: “We put a plan of action to seize the truce, and use it as an advantage in organizing activities and tasks that we could not do before- due to the security situation in the city.”

The Civil Defense team organized campaigns to renovate the graves of the martyrs that were damaged because of being targeted by a number of barrel bombs, and this campaign was attended by a number of volunteers and people from the city.

The campaign has worked on placing tombstones for the martyr’s graves by going back to the martyrs’ archives, so that they do not get lost, and remain as “witness to the trials and the sacrifices made by their owners,” according to Abu Suleiman.

The team’s work has not stopped since the beginning of the truce, due in part to the large number of families affected by the bombing, according to Ziad Abu Abdo, one of the administrators for the group. He says that using relatively small statistics to capture the number of people affected is difficult, because the majority of the civilian population’s 8300 residents have seen their homes deliberately targeted, or suffered from the destruction of infrastructure and public facilities in more than 80% of the urban area. This, according to a survey conducted earlier by Daraya’s local city council.

This factor has increased the pressures of the team’s work, and made the filling of water, the removal of rubble in front of houses, and the fortification of bunkers a priority of the Civil Defense- which depends on an organized system in carrying out “role”, rather than on the requests of the large number of the city’s affected peoples.

Ziad believes that “the cease-fire was the solution to the emergency situation in the city, and helped to reduce the suffering of the city’s people, as well as facilitating our duty. However, the suffering is not over. The city still lacks basic services, like fuel- which is a basic necessity to our work and our performance, and this lack has forced us to stop a lot of projects and activities, including the completion of those which were at the top in our list of priorities. “

Working in parallel with the restoration efforts, the Civil Defense’s Maintenance Department works on maintaining mechanisms throughout the city, and works in raising readiness, according to Jihad Abu Khaled, maintenance officer for the team. He says, “We started a maintenance campaign, but our inability to repair a number of mechanisms came as a result of a lack of spare parts. Furthermore, the use of diesel fuel which was extracted from plastic, rather than refined fuel oil, has led to many crashes in the motors, and drops in their readiness to only approximately 50%.”

Today, the city of Daraya’s front lines are remarkably quiet; no longer standing as targets of the Regime’s destructive barrel bombs- whose use increased in number to around six thousand, just during the past three years. However, the Director of the Civil Defense asserts that “the state of preparedness for any emergency is still on-going”. He pointed out that the team still regulates the night shift, and says that “the Regime’s side is not to be trusted.”

The Civil Defense’s Administration is currently looking for scores of worthy people in taking over responsibility, and will train and develop the work of the new team, and help to enact a number of awareness-raising activities for the next period. After undergoing training sessions over the past few months, members of the current team were divided into three groups: A fire group, a group trained to use heavy machinery, and a rescue team; all numbering about 20 workers, including administrators.