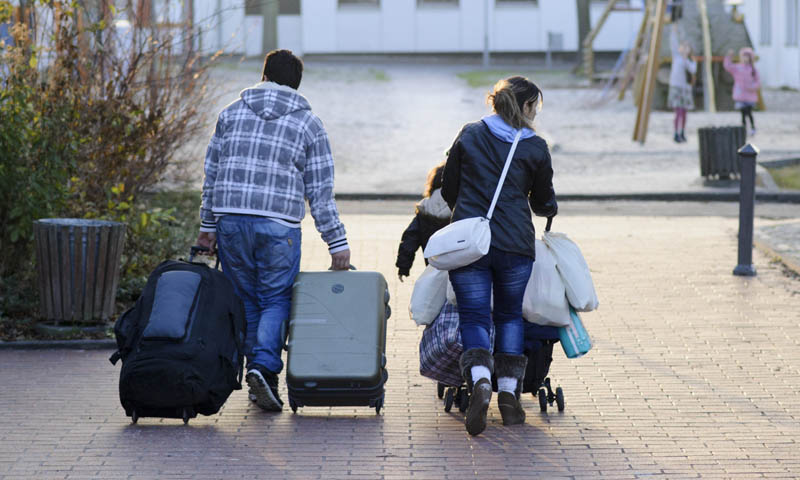 FRIEDLAND, GERMANY - DECEMBER 10: Unidentified Syrian refugees arrive at the refugee center on December 10, 2013 in Friedland, Germany. Hundreds of thousands of Syrians have fled Syria to neighboring countries as well as to Europe. Germany is accepting up to 5,000 Syrian refugees, though German church leaders recently called on their country to take at least 10,000. (Photo by Jens Schlueter/Getty Images)

Germany is considered the first choice for Syrian refugees heading towards Europe, and is the dream location for many who have yet to find a skilled smuggler that can take them across seas and borders. There, they search for safety, shelter, and dignity that Europe’s laws respect. This is according to their siblings who have left before them and plan to follow them later. However, has this image been preserved with its grand image after crossing the German border? And will the image of perfection for Germany remain when it contains its refugees?

The 2014 study added that 15% of Syrians in Germany are university students, 35% of them hold a high school degree and 11% have not received any previous education.

I Want to Work

Hana’, a 27-year-old engineer, arrived six months ago to Germany through a journey that took her from Syria to Lebanon, then Turkey, passing through the sea and Greece, with the fear of being fingerprinted on her way to the land of dreams.

Hana’ now lives with her husband in one of the accommodation centers in Germany, where she waits for her turn for trial to receive her right of refuge. However, time for her moves slowly, and as she says: “I feel as if my skills are disabled. Some may admire a lazy life and receiving aid, but I did not come to Germany to stay in this accommodation center”.

Hana’ is proficient in English both spoken and written, and has a university degree with 4 years of engineering experience. This allowed her to imagine, while she was planning to seek refuge, that life in Germany would be full of work and volunteering opportunities to help other refugees. “But all of that planning was wasted because we have to stay stagnant, watching the lack of personnel and the dire need for translators between us, while we do not move at all” according to her.

Hana’ and her husband bore the suffering of walking to the refugee camp beside theirs under heavy rainfall, searching for a volunteering opportunity in either teaching refugees, translating for them or helping them enter and organize their data. However, the first person they met at the camp doubted their intentions. “An employee from the Red Cross greeted me and asked me many questions, as if I was looking for a job for financial means, but I told her that I wanted to volunteer as a response to the generosity of my host country. Her reply was a disapproved look that told me to go back to where I came from”.

Mohammad, Hana’s husband of 32 years, explains that the crisis is larger than Germany’s preparations, and that they are not used to dealing with these kinds of problems. But Mohammad says: “Every time I feel the pressure of the restrictions imposed on us or get uncomfortable with the way they treat us like useless people, I remind myself of Germany’s crisis with refugees. We can actually serve each other, which is what we want. There are a lot of doctors and teachers among us that can use their skills to ease the relationship with the Germans, we are not asking for a miracle”.

An apartment, keys, and a greeting with hugs

This is what Abu Salim expected, or at least, this is what his relatives in Germany told him when he decided to run to Europe with his wife and children. Abu Salim explains to us that “life in Turkey is very expensive for a family of six. Rent is high as well as electricity and gas bills. My job was not stable, so I continuously searched for people who needed a worker, a famer, or a courier. Because of this our lives were very difficult there”.

The family decided to run away to Europe. Um Salim borrowed money from her relatives; they all bore the obstacles to make the dream come true.

Today the couple lives with their four sons in one small room in a refugee shelter. The husband adds: “I did not imagine that Germany would welcome me with one small room. My friends told me that an independent house would be waiting for me. They sent me photos of large malls and beautiful houses. Look at our situation now, we do not know when we will leave the camp, and we live on the aid we receive from refugees of other nationalities, and we don’t know how to connect with them”.

“Aid has become our case”

Hana’ sees that the failure to use the refugees’ skills and the unemployment situation they live in allowed aid to become the case of their lives. There are many examples that reflect this situation, she adds: “There are a lot of stories we hear of people running away from one camp to the other for the sake of a couple of more Euros in aid. So now, the clever one is the one who can get the largest amount of aid”.

She also says that there are some cases where refugees bend the rules to earn more aid. She explains: “It is enough for me to say that my neighbor and her husband in the next room agreed to get a false divorce, because that will allow them to earn 40 more euros, not to mention the race to have more babies to earn more aid”.

The void that the refugees live within brings back “old” problems, according to Hana’, by “old” problems she means “problems from before the revolution, such as women’s gossiping, jealousy and fabricating stories, what do they do other than that?”

Lama, 28 years old, does not have a different situation than Hana’, other than that she speaks German.  She is a doctor from Lattakia and a graduate of Kalamoon University. She has been in Germany for two years, where she studied German to finish her university specialization. However, this did not allow her to volunteer for refugees; “the problem was failing the standardized test. I applied to take the test but my turn is ten months from now; this is Germany’s bureaucracy”.

Lama informed us that she has gotten used to the administrative bureaucracy in Germany. In her opinion, it is a different bureaucracy than what we are used to in the governmental departments in Syria. She explains: “Here, bureaucracy is based on laws that you cannot bribe someone to ease the process, and it would do you no good to get a recommendation from a person within the government, in addition to the complications of the laws that require you to get specialized lawyers’ help in order to run an application.”

A child for “translation”

Lama says that these judicial complications surprise new refugees in Germany and make things more difficult for them. Despite the fact that she got used to these complications, yet she gets frustrated at times. She adds: “I went to a health center for refugee care and I expressed my desire to help them by giving medical services to refugees, but they refused my offer because I did not finish my university education yet”.

Lama was surprised to find the person responsible for translation at the medical center to be a 10-year-old German kid, who spoke Arabic and was responsible for communicating between the refugees and doctors. “I asked; how is it possible for a lady to explain her problems to a 10-year-old girl? They said that this is the only choice that they have. When I offered to translate for them, they explained that I could not do that as I did not pass the standardized language test, even though I was communicating with them in German”.

The stories in this report do not summarize the facets of the lives of Syrians in Germany in a positive or negative aspect. It only sheds light on some difficulties that they have which contradicts the expected perfect image they had before.