The Repeated Displacement of the Provincial Council of Aleppo: It Ends if Settlement in a Tent 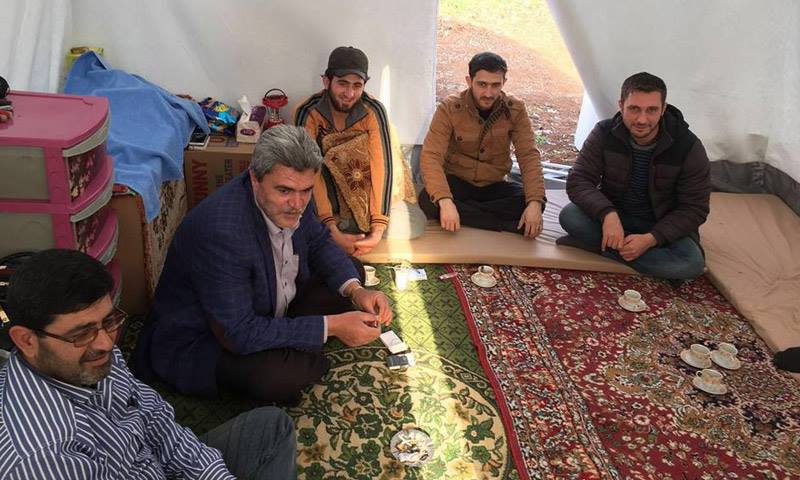 The Provincial Council of Aleppo conducts its business inside a refugee camp just east of Azaz, a small city on the Turkish border, after the mass exodus of its staff from the outskirts of the Aleppo suburbs. They left their headquarters in the small town of Haritan.

The Governor of Aleppo, Bashir ‘Aliytu, fled his home with a group of members of the Governorate Council. Governor Aliytu is from the city of Tell Rifa’at, which was controlled by “Syrian Democratic Forces.” He began conducting business inside his tent February 12th of this year.

In a conversation with Enab Baladi, the Governor explained the nature of the current Provincial Council’s work. “Lately, the focus of our work after the phenomenon of mass displacement of the population from the northern villages is the cooperation and coordination with humanitarian organizations to provide what they can for the refugee camps.” He added that, “our current work is more in the field than in the office…we share the worries and the problems of the people through being here with them in the refugee camps.”

Work stopped in the latest Provincial headquarters (located in Haritan) after Russian air attacks in the cities of Haritan, ‘Anadan, and Bayanun during the time that the Regime cut the route between Azaz and Aleppo for nearly a month.

“There was no logic in continuing work in Haritan and exposing employees and constituents in the building to danger as the Russian aircrafts are targeting all public facilities. They do not make distinctions between civilian targets and others, or medical and teaching facilities and others,” according to the Secretary General of the Provincial Council, the engineer Muhammad Fadhila.

Displacement from Haritan occurred in the past. The headquarters moved another time from Deir Al-Jimal nearly four months ago, the results of Russian aircrafts targeting the building twice in a row.

The Provincial Council currently seeks to carry out its business from several different headquarters dispersed throughout the province, according to Mr. Fadhila. He believes this eases the loss of human resource staff in case aircraft targets them again. He stressed, “The distribution of offices in several places enables us to continue provincial affairs that have been cut off.”

“Our plan is to open three offices, one of which will be in Azaz where the Governor will be located.” Mr. Fadhila added. “The second office will be in Aleppo located inside the city council building. The third office will be in the rural west, which is the furthest from fighting and considered the safest.” He stressed that the first office will be open within days.

Since early February the northern countryside of Aleppo Province has been exposed to a large-scale operation launched by Asad’s Forces and the militias that follow him, and is backed by Russian air support. This led to their successive control over the villages of Nubil and Zahra, which cut the villages off the route between Azaz and Aleppo. This coincides with the progress of “Syrian Democratic Forces” in the rural north of Aleppo.

A Long History with Displacement

The Provincial Council has had a long history with shelling and displacement since establishing its first headquarters in the area of Shaykh Nijar in al-Sina’aia, Aleppo.

Deir Al-Jimal was relying on the headquarters since the beginning of the Third Session (current), continuing their work for seven months until it was targeted in November 2015. They then moved to Haritan, which was targeted once more in early February of this year.