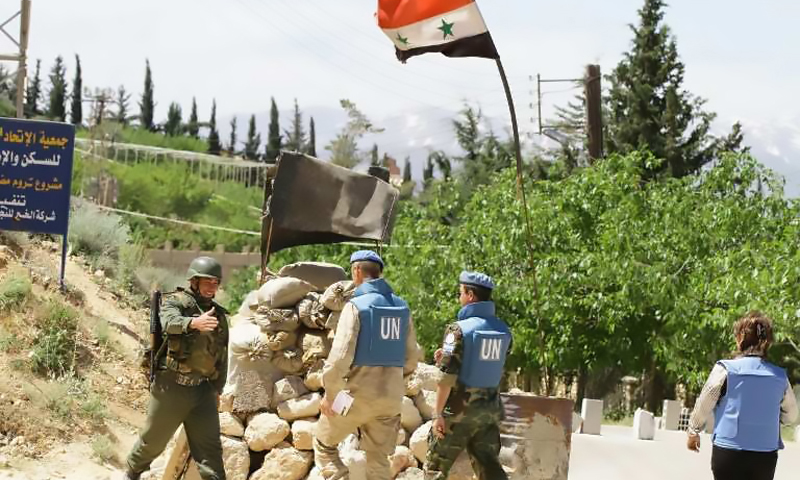 Cantonization in Damascus’s Suburbs: Why Zabadani and Madaya?

Cantonization in Damascus’s Suburbs: Why Zabadani and Madaya?

Towards the end of 2015, the Russian ambassador in Damascus personally sponsored negotiations between Zabadani’s conciliation council and the Syrian regime. The negotiations did not come to an agreement which might preserve Madaya’s identity and prevent a demographic change in the area.

The blockade on the town of Madaya intensified since November and December 2015 to the middle of January 2016. Under no circumstances were food items allowed to enter Madaya leading to the starvation of the population. The forced starvation of the population has led to the death of 60 people so far. Certain questions present themselves: Why is the regime and its allies putting pressure on Zabadani and Madaya specifically? How is Madaya’s besiegement different to the regime’s besiegement of other areas in Syria?

The Regime’s Goal is the Water Sources

The Syrian regime seeks to achieve a military gain by imposing its dominance on an area that has been out of its control. In particular, the regime wants to restore its control over of the Ayn al-Fijeh and Beqeen water sources to end the threat of the capital’s water supply being cut off. By limiting the threat to Damascus’ water supply, the regime seeks to retain its popular support in the city. In controlling the area, the regime will also maintain the only safe passage to the outer world to Lebanon known as Jadidat Yabous.

Concentration Points for Hezbollah and Iran

While Iran is aware of the approaching expiration of Assad’s role in ruling Syria, it focuses on searching for concentration points which will bolster its role as a significant regional player and prevent it becoming a mere regional tool used by greater countries. As such Iran has many reasons for its interest in Zabadani.

Zabadani is considered the suitable alternative to the Lebanon’s Bekaa Valley for the cultivation of cannabis, hemp and opium as Hezbollah is being pressured by the Lebanese government and regional authorities to stop this agriculture in the Bekaa Valley. Cannabis agriculture is considered ‘green oil’ for Hezbollah. According to previous Lebanese reports, by the end of 2013 Bekaa Valley’s ‘green’ agriculture generated an estimated 55 million captagon tablets, 50 tons of opium for the heroin industry and one thousand tons of hemp. It is considered an inexhaustible source of money. In a bid to realize this plan, Hezbollah filled up wells, destroyed production projects and burnt trees in the Zabadani plain. Hezbollah later turned to Madaya to continue the project and it will subsequently turn to the Barada valley. Hezbollah’s fighters use the blockade on Madaya as a means to pressure Madaya’s people to sell their property in exchange for foodstuff rations. Hezbollah fighters then plan to resettle families loyal to them and Iran in the area in a similar manner to what is happening in Lebanon. In the process, Hezbollah and Iran will have control over the water sources which feed the capital Damascus and will thus act as a pressure on the next government, regardless of its loyalties, and enable them to play a great political role.

In September 2015, after a long and destructive conflict among Hezbollah and Ahrar ash- Sham Movement, a cease-fire was accorded known as “Al Fawea and Kefraya- Zabadani.” According to the ceasefire, in return for Jash Al-Fateh ending its besiegement of Kefraya and Al Fawea, Hezbollah and regime forces would end their blockade on Zabadani and Madaya. Jaysh Al-Fateh, considers Ahrar one of its fundamental fighting components, and the areas of Kefraya and Al Fawea are inhabited by Iranian fighters and Shias loyal to Iran making it a significant area of both Hezbollah and the Iranian state.

As part of Iran’s endeavor to bolster its regional political role, there is a move to reopen Kurdistan Workers’ Party (PKK) training camps in Zabadani to pressure Turkey. Kurdish sources have confirmed Tehran’s support for the protection units of the Kurdish people.

There are efforts to open Iranian weapons’ development and storage centers that will serve as substitutes for the centers it allowed international monitors to enter based on the international agreement 1+5. Hezbollah is also storing its weapons in Zabadani’s orchids following international pressure on it to disarm in Lebanon. By dominating this area, Iran seeks to control passageways to move power to and from Lebanon (Lebanon’s marine basins) as Zabadani is a midway point between Homs and Lebanon.

The regime and its allies are aware of the material benefits of besieging Madaya. The regime uses the possibility of generals acquiring large material gains as a policy to encourage its generals to go to the front fighting lines. The material benefits of besieging Madaya encouraged Hezbollah to manage the blockade and extend its role to buying properties in the Zabadani plain and selling food rations for large sums of money. Simultaneously, they facilitated the entrance of aid money through a merchant accused of being close to the Ahrar ash-Sham Movement raising questions. The commission for converting 10,000 US Dollars to Madaya is about 350 US Dollars and the amount barely buys 45 kg of rice and a small quantity of flour or milk for babies. It appears that through the siege Hezbollah bolstered its financial situation following the decrease in the globally prices of oil and amidst rumors that Iran will reduce its financial support for Hezbollah rendering the siege a source to fund its participating in the war in Syria.

Hezbollah and Iranian control over the area ends the possibility of ”Islamic State” forming an emirate in Qalmoon which threatens Hezbollah’s weapon stores in Lebanon’s north, its oil and drug trade, and complicates Hezbollah’s weapons situation inside Lebanon.

All of Syria is Russia’s Possession

Russia did not have any specific interests in Zabadani as it considers all Syria “its possession,” according to information leaked from Assad’s meeting with Putin in Moscow in October 2015. It considers what is happening in Syria as an internal conflict among allies. It has tried so far to satisfy Turkey (prior to Russian plane incident), Iran and the regime all at the same time.

The ”national conciliation’s” committee’s attempt to sign a Russian sponsored ceasefire did not succeed as a result of Russia’s placation of its allies. The “national conciliation” committee included, Abu Ammar Jamil, Abu Mouhammad Maaroma, the governor of Damascus Countryside and a colonel representing the regime. The committee met with the Russian ambassador, but when the latter sent the committee to Zabadani to sign the cease-fire deal, Hezbollah refused to send a representative. Iran intervened with the Russians to support Hezbollah’s stance, resulting in the burial of ceasefire agreement. The ceasefire agreement would have ended the ”Al Fawea-Kefraya for Zabadani,” exchange deal.

is Ahrar ash-Sham facilitating the demographic change of the area?

The Islamic Ahrar ash-Sham Movement, one of the prominent factions in Madaya and Zabadani, faced much criticism about the way it bargained the cease-fire with the regime and Hezbollah. Some people have hinted that the Movement contributed indirectly to changing the demography of the area by accepting the terms of the ceasefire.

Current information from Madaya indicates that a number of merchants and prominent figures close to the Movement helped Hezbollah to spread its control over extensive areas in Zabadani in order to consolidate the Movement’s authority in the north of Syria with Turkish support. Damascus governorate’s border region with Lebanon would thus remain under Hezbollah’s control and influence and by extension Iran’s. However, activists from the area confirm Ahrar ash-Sham deprived Hezbollah and the Syrian regime of the opportunity to celebrate their victory in Zabadani after three months of fighting that exhausted tens of Syrian and Lebanese fighters alike. The Movement seeks to sabotage efforts to empty areas in Zabadani plain from civilians in accordance to its official statements during the negotiations.

The UN plays a spectator role

Amidst the fighting in its different forms and using various weapons, the United Nations is not only playing a spectator role, but also its organizations’ work in Zabadani and in all of Syria is directed at preserving the balance of powers until an agreement is reached among major powers about the future of Syria.

The United Nations failed to sponsor any cease-fires or agreements to evacuate civilians from areas where there is fighting or to neutralize areas to protect civilians from the fighting. It was at times the reason for civilians’ increased suffering in its bid to maintain the balance of power. On the 18th of October 2015, UN organizations brought expired high energy biscuits (320 boxes from 650) into Madaya instead of baby milk, leading to the death of Gassan Aoud and 41 cases of food poisoning.

According to area’s inhabitants, the Zabadani plain with its towns and villages has become an ”Iranian colony” managed by Hezbollah with a symbolic presence for the Syrian regime, with Russian blessing and amidst international silence. Its activists fear the systematic eviction of Sunnis from Madaya, Zabadani and Beqeen towards the Syrian north, and the resettlement of Lebanese and Iraqi militia members in their place.

Madaya is administratively part of Zabadani and is located to the north west of Damascus within the Eastern Lebanese mountain range. It is an important summer resort in Syria alongside Zabadani and Bloudan. The district has a population of 16,780 people according to statistics from 2015. After the enforced eviction of Zabadani’s inhabitants and their settlement in Madaya, the district’s population soared to 40 thousand people. Assad’s troops and Hezbollah’s besiegement of the area began subsequently. Internally, Ahrar ash-Sham Movement dominates the town and it is formed of the Hamza bin Abdul Mutalib brigade and the Cavalry brigade consisting of the Zabadani’s Martyr, Muhammad bin Muslim, and a-Hak Martyrs brigades. There is a presence for al-Nusra Front in the area, but it is less influential.

The cease-fire agreement reached in September 2015, known as “Al Fawea and Kefraya- Zabadani,” dictates the end of the siege on all the areas mentioned in the agreement, the evacuation of fighters to the north of Syria, allowing the wounded to evacuate, and other clauses that would enable a change in the demography of the area. Despite the agreement, the siege was not lifted on Zabadani and Madaya and no safe routes were opened to evacuate the area’s inhabitants. Zabadani’s people also refuse to move to Idlib in contradiction to the terms set out in the accord.