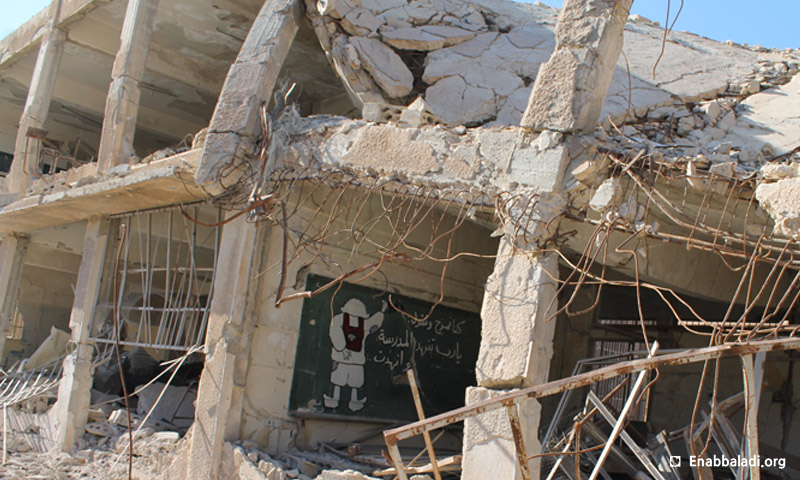 I asked my father to bring wood from my old school that was destroyed by barrel bombs. There, I searched for my desk, but did not find it! We collected some of the remnants of the furniture there, and returned back home immediately before the launch of the air strikes again.” This is how Muhammad Al Khuld answered our question about his last visit to his school.

Muhammad, 13 years-old-boy, tells his story about how much he misses his school, and his dream about continuing his studies to become a doctor in the future. He says: “I excel in all the lessons I do with my teacher at home, he promised me to get the certificate I aspire for in the future if I keep learning and studying.”

The deterioration of the educational sector in Darayya, due to the war and the shelling, prevents Muhammad from continuing his school, says Muhammad Abu Omar, a member of the documentation office of the local council of Darayya. The city used to have 31 schools including kindergartens, primary, elementary and secondary schools, most of them are damaged now and shut down.

This reality deprived the school children from their right to learn and affected their psychological health very badly because of the lack of stability. Most of the families are forced to change locations continuously after each air strike.

Nevertheless, many civil initiatives tries to overcome the difficulties such as “Iqra W Erqa” and “Bashayer Al Fajr Elementary School”. Abu Khalil, the headmaster of “Iqra and Erqa” school, says: “we decided not to come to a standstill, we did a field study to the surrounding circumstances and decided to set a plan to return school children back to school through preparing a teaching staff whose task to gather the students in learning circles in houses and basements.”

The teaching staff faced many difficulties in teaching the students. The non-stop sounds of shelling and bombardment have affected the concentration of the children, and thus negatively affected their learning progress, according to Abu Khalil, who showed that he is afraid “that the spread of illiteracy might be one of the repercussions of the revolution in the future.”

During a visit to the school, one of the school children parents says: “the fierce shelling of the city made us steal from the pilot’s break time to teach our kids… Thanks to the efforts of the teachers who excreted all their efforts in this regard.”

The case with “Bashaershayer Al Fajr” was different. A school where Muhammad used to study. He says: “I was extremely happy last year because I returned back to school, but this year, my school is closed down.”

Maan Abu Al Roud, a teacher at “Bashayer Al Fajr” explains the reason behind closing the school is due to the security situation in the city. He says: “The severity of the battles fought at the frontlines, and the intensity of the shelling since the beginning of the school year prevented us from opening the school, lest any harm is afflicted upon the children. At the same time, teachers were so busy doing their civil revolutionary work or on the frontlines.”

Recently, the school management allowed some families to seek refuge in the school temporarily after their houses have been destroyed by the shelling.

According to Maan: “Darayya witnessed an academic growth during the past two years, during which, several schools were opened and a large number of students were enrolled, even the illiterate young people. This led the educated elites in the city to set educational projects and establish new institutes and organize capacity building courses. However, these initiatives failed because of the Assad Regime fierce campaign against our city.”

The staff of “Bashayer Al Fajr” continues the preparation of interactive curriculums and teaching methods for the school children who stopped attending school for a long time, aiming at starting schools when the circumstances allow them, according to Maan, who wishes that these initiatives might help them overcome the negative impacts in the future.