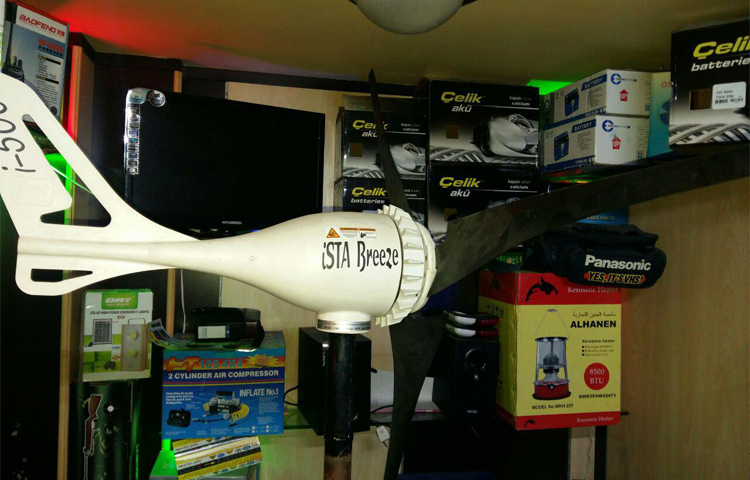 A windmill covers 70% of need

Windmill generating electricity covers 70% of total need for a family.

‘However, you cannot depend on it fully, you need a solar panel beside the windmill to get free electricity,’ he said.

Saad Muhana pointed out that the cost of the windmill ranges according to its type and capacity. The widespread type is ‘the Turkish windmill.’ It costs between 1100 and 2000 American dollars.

Along with the windmill comes an electricity regulator to charge batteries and 220 voltage lifter.

‘The price of the battery and connectivity equipment is small and we install it for the client for free,’ Saad added.

‘The high cost of the Turkish windmill made me get a hand-made one which generates electricity in a good way. It is a windmill that run a power generator,’ Alaa said.

‘The car generator is good enough. It generates 12 voltage and the strength depends on the movement. It connects to a battery that is continuously charged just like it operates in a car. It cost me 300 dollars only.’

Windmills are not always efficient. They require strong and continuous wind. Sometimes,

According to Adel Kubreete, originally from Hama and migrated to Idlib, windmills are designated for heights in order for it to function. It is very expensive, too. You can operate an electric generator for a period of two years in the price of one windmill. This way, you guarantee having electricity. Since we have amperes, we do not need windmills.’

Kubreete explains that generating power in an irregular way may cause damage in batteries and electric devices. Another problem is that wind is not constant. However, it can be efficient if its implemented in big projects in which electricity is generated regularly.

‘Green energy’ use in Syria’s ‘liberated regions’ did not emerge to preserve environment or reduce pollution, Syrians use it to provide a modest sum of lighting and cooling since power in Syria has become scarce.