Bodies on the Shores of Izmir, following Loved Ones or Losing Hope? 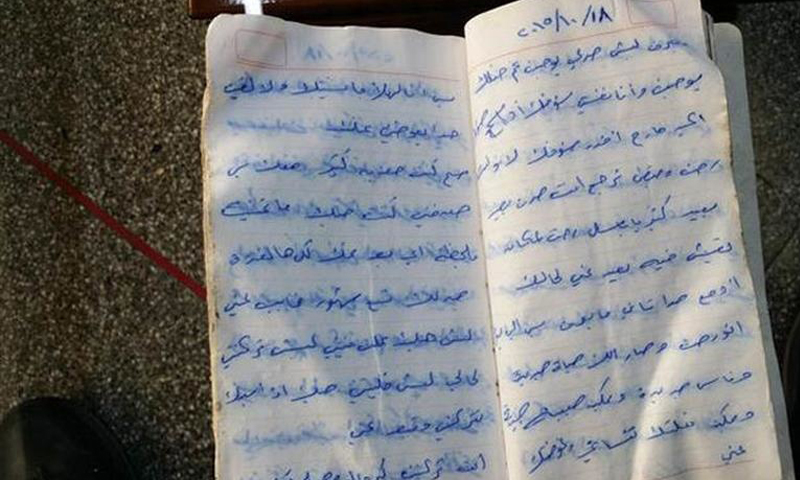 A Syrian refugee’s diary journal documented the uncompleted chapters of her “love story”. The diary was found on her body as she floated in the open sea close to the shores of the Turkish city of Izmir. The sea was faster than her attempts to follow her fiancé who was in Germany. The sea swallowed her along with tens of other Syrian refugees in the start of January 2016.

This refugee remains anonymous until now, but her diary or rather the pages which have survived the water and are legible carry within them the pain, emotions, and tribulations that dominated this girl’s journey from the time she moved till the time she was separated from her lover. Taylan Yildrim, a journalist for the Turkish Dogan Press (DHA), managed to acquire the diary to convey the girl’s story and anguish that is within it.

Written between 2013 and 2015, the diary contains many memories. The girl wrote of the beginning of her story of love which started in conjunction with the beginning of events in Syria. Due to the fighting close to Damascus, she had to flee to Turkey with her ‘lover’ Basel. The girl’s journal carried even “more painful” memories that increased following her departure from Syria. She became more introspective after Basel left her towards the start of 2015 to head to Europe. “He felt no responsibility,” towards her after he left, as she described in one of the pages of the journal.  In one entry she wrote, “Do you know why I have been longing for you for two days… Two days and I wish to see you or hear your voice. Of course I will not be able to see you because you left and you are very far away Basel. You went to a place to live alone, away from me or to live with someone else, I don’t know. The important thing is that you left and you now have a new life.”

To understand the psychological aspects of the matter, Enab Baladi contacted the psychologist Kholoud Al-Thahab. Al-Thahab is a graduate of the Psychology Department, Faculty of Education in Damascus University and the branch manager of the “Because You are Human” organization for psycho-social support. She considered that, “the girl experienced pain, loss, and anger before she drowned. She felt the loss of someone she considered a support and source of security until he left her and she was in shock.”

She continued that according to the “Kübler-Ross” approach, “People go through four stages when they deal with loss (death, divorce, or a separation). They are denial, anger, compromise, and acceptance.” According to the specialist, “Not everyone necessarily passes through these stages. Some people do not pass through the stages in this order, and others skip some stages.” She added, “Here the girl was in the stage of anger mixed with disappointment and loss. The confrontation is difficult and there is no chance to return to what we lost except with anger and rebelling on everything and escaping from everything.” She clarified that this girl’s loss was not only for a person she was attached to although he was the main cause of her shock, but also “perhaps like most Syrians she lost a homeland, a society, family, a house and a future.”

Loss in the Midst of a New Society

In the same context, in conjunction with the increase in the number of cases of migrants drowning off Turkey’s case, Al-Thahab said, “What prompts people to throw themselves into the open seas is that they have not yet reached the stage of acceptance (according to the Kübler-Ross approach). They suffer and dwell in their crisis, anger and sadness.” Their spirits chase after false salvation that takes the form of rosy dreams. Yet their spirits are weighted down by the effect of loss and the trials they experienced. They did not work yet to comprehend what they have endured. They did not found people to help them prepare themselves for what they really want to achieve.”

Regarding the authorities that are responsible for the crisis which Syrians are experiencing, Al-Thahab divided the responsibility into circles. The larger circle is the society, and the smaller circle within it is that of the individual, what affects him/her, and what is affected within the individual. According to Al-Thahab, the psychologist Erikson considered that individual’s responsibilities lie within the domain of things they can affect, “We cannot consider an individual responsible for bombing that is happening in a part of the world, or hunger from starvation in another place.” Here psychologists play a role in focusing on this space, and helping “individuals to see and enable them to control what is within this circle by understanding what happens in war. Until this happens individuals’ behaviours remain abnormal in abnormal circumstances naturally.”

A recent a statistic was published on the “Time Turk” (20 January 2016) website, based on interviews with the Turkish coastal guards. The statistic showed that between 15 and 17 January 2016, in 3 days alone, the coastal guard managed to arrest 544 migrants intending to head to European coasts, and they are alive.