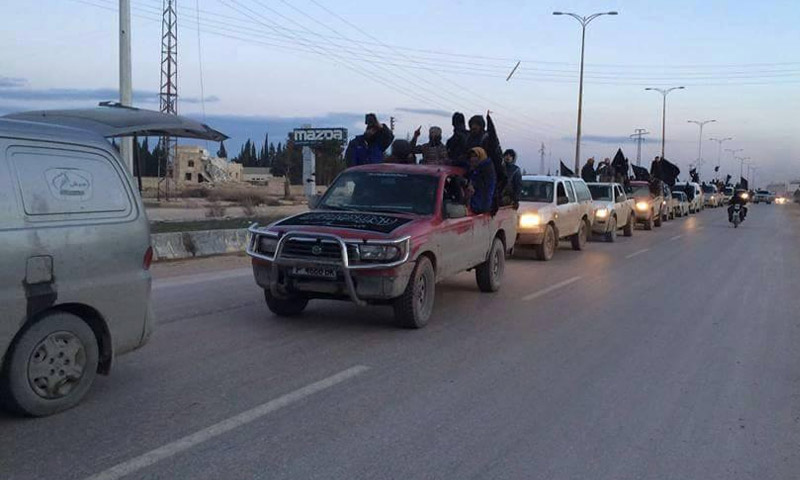 Persons close to al-Nusra said, ‘al-Nusra prepares for any attack by Assad regime and Iran.’

Activists fear the consequences of what they called ‘swallowing Aleppo.’

‘Al-Nusra divided their boots and deployed them in the northern countryside and areas close to Kastilu road, a central route from Aleppo city to the north.’

Abd al-Nur said the convoy consists of ‘approximately 2000 fighters and includes cars and heavy weaponry. He asserted that the ‘movement is to confront any attack by the regime which prepares for a big battle in Aleppo.’

Activists fear the challenge of al-Nusra and their sudden entrance of Aleppo.

Activists fear since al-Nusra had detained five civilians in al-Ansari district at 9 p.m. yesterday, saying ‘al-Nusra detained them while they were in a coffee shop because they were smoking hookah and watching TV shows.’

Also, al-Nusra installed a new checkpoint on Kastilu road. Majed abd al-Nur considered that ‘the old checkpoint of al-Nusra has been installed for over a year

but it is not fixed. They install it when they want to detain people.’

Activists in Aleppo said that by installing the checkpoint, al-Nusra aims to detain people under accusations of ‘corruption and apostasy.’

Media activist, Usama Muhammed from Tall Ref’aat city asserted that, ‘detaining two fighters from the 55 force branch of al-Jabha al-Shamiya (the Levant Front); Sabri Sukran and Ahmad Kabsu from Tall Refaat while they were heading to Aleppo countryside.’

‘Battle News Today’ Network, known to be close to al-Nusra, published quoting a special source that detaining the two fighters is because ‘they were cooperating with Islamic state and there is an evidence for their involvement with the Islamic State.’

The network said the detainees belong to al-Shamiya Front and their force disowned them. The rest of the involved cell will be persecuted when detained.

Al-Nusra faces accusations regarding its controlling Aleppo and that it attempts to make its own sphere of influence, whereas close people to al-Nusra consider it to be the most ‘successful’ force fighting against Assad regime in the region quoting its battles in Idlib beside the Free Syrian Army and other Islamic factions, last year.