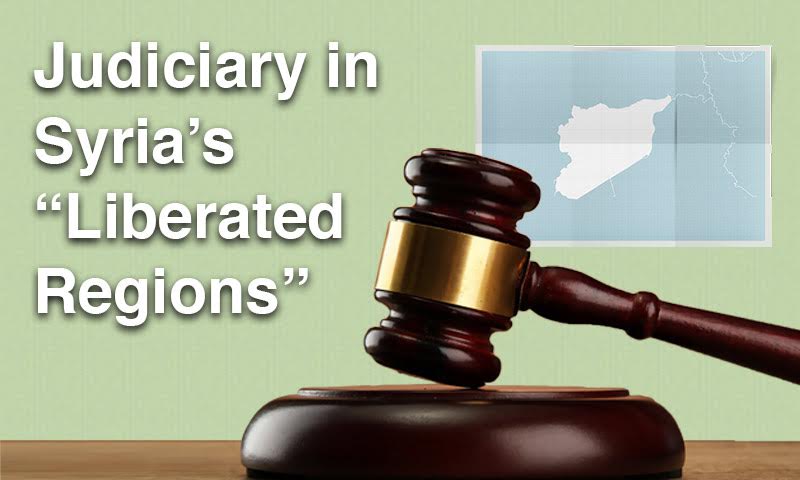 Disclaimer: Enab Baladi’s investigation does not involve judicial practises in regime-controlled areas and areas under the Islamic State’s control.

The judiciary system in Syria was not isolated from the wide-spread institutional corruption in Syria before 2011. Debating the widespread corruption in this particular system was a taboo. The immensity of the corruption in the judicial system made Syrians call it a cancer in its final stages that neither could be healed nor obliterated.

Senior corrupted officials in the security and military divisions used their influence to intervene in the tiniest details of judiciary procedures. Senior officials not only bullied lawyers and judges for their own personal interests, but also appointed judges to facilitate issuing legal previsions that deeply contradicted the Syrian constitution.

Due to this corruption in the judicial system and its procedures, criminals were declared innocent and oppression increased. These actions paved the way for wide scale practices of bribery and nepotism.

We would even go so far as to say, this was one of the reasons for the outbreak of the Syrian revolution in March 2011.

Syrian lawyers have been documenting the Syrian regime’s crimes and human rights violations since the outset of the Syrian revolution. The revolution movement was inclusive of legal activities. The media and field work were the priorities in that period. Lawyers’ efforts focused on documenting the regime’s crimes and violations. This led to the creation of legal advisory centres and centres for documenting human rights’ abuses. Some observers argue that overall lawyers played a minimal role in mobilizing protests in the revolution with the some exceptions. In Aleppo lawyers played a vital role in coordinating peaceful demonstrations and they had a prominent role in defending individuals detained by the regime for participating in the demonstration. They participated in set-ins demanding the release of detainees and the amendment of laws relating to them, and they paid bails to release them. In Raqqa, lawyers initiated pro-revolutionary demonstrations. In Idlib also lawyers contributed significantly to the revolution. However, in other Syrian cities, lawyers played a very minimal role in the revolution.

As the revolution turned into an armed opposition, clashes started in different areas. In some regions, clashes led to the regime evacuating along with its apparatuses. Consequently, there was a need for judicial boards and police to respond to crimes, theft, and protect public and private property. This period in the development of the new judicial system in regime-free regions can be best described as a period of ‘improvisation.’

Legal observers told Enab Baladi there were limited initiatives from legal bodies formed post-revolution like Syrian Network for Human Rights. These bodies attempted to replace the state’s judicial bodies which evacuated when the regime withdrew from the regions.

During this stage, chaos dominated the scene and the perpetration of acts of revenge within communities increased. Also, some armed factions took a judicial role and issued verdicts of their own accord.

The chaotic situation was a reason for the creation of legal offices which evolved into legal councils.

Following this, new judicial bodies and associations started emerging. These bodies took their power from their affiliated armed factions. In most of their judicial work these bodies depended on Islamic Sharia and were chaired by Sheikhs and judges with limited experience. Some legalists and judges who had defected from the regime called for the activation and implementation of the Syrian (state) Law. Other legal bodies called for the application of the Unified Arab Law as a moderate solution.

In this extensive investigation, we attempt to provide a profile of the reality of the judicial system since the outbreak of the Syrian revolution. We attempt to provide a classification of the established legal and judicial bodies and judicial references in most of the liberated Syrian regions. We gathered the information by communicating with legalists, judges, jurists, and armed Syrian rebels. We relied on interviews conducted by Enab Baladi’s investigation team with a number of Sharia Boards’ chiefs and army/military leaders. We also used polls conducted by Enab Baladi personnel which included lawyers, legalists, defected judges and Syrian nationals who experienced the Sharia and judicial bodies first hand in liberated areas.