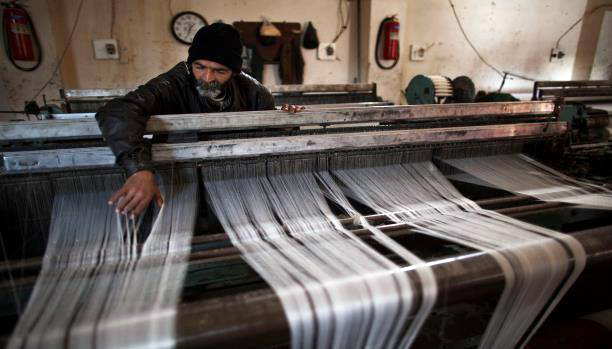 The Syrian Economic Forum published a field and analytical study entitled “Repercussions of the Syrian Crisis on the Textile Industry”, prepared by Dr, Abdullah Hamada. The study, which encompasses 301 textile factories located in northwest Syria, aims at identifying the most important strategies to support and contribute to the rehabilitation of textile factories in Syria, in order to secure the urgent needs of citizens.

According to the study, before 2011, textiles contributed to approximately 12% of the net domestic product and 63% of the industrial sector’s total production, and it accounted for approximately 20% of the labor force. Syria used to export around $3.3 billion dollars of textile products.

The study’s statistics point that transportation services were “often” available to 37.3% of the factory owners. Most owners (48.6%) reported that the service was “sometimes” available, and 2.8% of them reported it was “rarely” available.

Concerning the discharge market, the study shows that 82.4% of textile factories produce goods for the domestic market, 2.3% export to the Arab countries, and 9.6% export to other countries.

The analytical part of study also explores a number of factors affecting the production of textiles such as number of workers, working hours, factory space, factory ownership, and factory condition. The study highlights the government actions in response to the textile factories’ crisis, and it concludes with a summary of the analytical study and a number of recommendations based on the study’s findings.